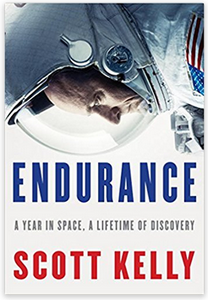 In this edition, life on the International Space Station, a look at the lyrics and creative process of the singer of Screaming Trees, tech-induced depression, and more.

Erin Kodicek: I'm about a hundred pages into Endurance, astronaut Scott Kelly's fascinating memoir of the year he spent on the International Space Station, and the effects it had on his body (information NASA needs as they plan a mission to Mars). He also talks about the unlikely path he took to arrive at this coveted career. Kelly was a terrible student through high school, and even into college. Fortunately, he happened upon a book that would change the trajectory of his life: Tom Wolfe's The Right Stuff. Armed with the stimulus he needed, Kelly dug in and did what was necessary to achieve his goal, one of the myriad inspiring messages you'll find in Endurance. It answers many of the general questions we have about life in space, from the profound to the mundane (turns out astronauts give bad haircuts and unclog toilets like the rest of us earthbound peeps). If you need a kick in the pants to get out of a rut in your life, this memoir just might be your Right Stuff.

Jon Foro: The Northwest has always a solid, well deserved reputation for darkness, both literal and otherwise. Despite its new carapace of shiny buildings and modernist restaurants, the interminable rain and darkness of winter is real and has informed the work of writers and musicians from Raymond Carver to Kurt Cobain, to name just two who didn’t quite make it through. Thankfully, Mark Lanegan is still kicking. If the longtime singer for Screaming Trees (and many subsequent projects, both solo and collaborative) isn’t as famous as some of his contemporaries, he should be. Besides being trite, “gravelly” “and “gravitas” don’t nearly describe his voice, which seems to claw its way out of a black hole at the center of a constellation made out of Tom Waits, Leonard Cohen, and Nick Cave (and maybe Buddy Holly, if your listening). It’s perfectly matched with his lyrics, many of which are now collected in I Am the Wolf, along with his recollections of writing and recording them. Even if he is in LA these days, his perspectives are still a bit gloomy. But their clarity projects defiance, the sort of sand required to stare down the void. Chin up, Lanegan. The only way out is through.

Adrian Liang: I’m in the throes of gut-churning anticipation of this season’s final episode of Game of Thrones, and it’s making me recall the wonder I felt reading Seth Dickinson’s The Traitor Baru Cormorant. It’s almost impossible to outdo George R. R. Martin when it comes to political fantasy, but I think Dickinson did it with this serpentine story of a budding rebel who is folded into the bureaucracy of the empire that conquered her people. Civil war, psychological warfare, and a protagonist that will keep you guessing as she gets under your skin make this book a winner. It’s a bit of a slog in the beginning, but push past it and you’re golden. (Check back here on Monday for my post about other books to read once this season of GoT is over.) While I wait for Sunday night, I plan to dig into Bored and Brilliant: Rediscovering the Lost Art of Spacing Out by Manoush Zomorodi. A new book getting a lot of press now is iGen, about how youngsters these days are on their screens too much and it could be making them depressed, but I want to find positive reasons to stay off my phone and computer screens, and Bored and Brilliant seems to be one path to try.

Sarah Harrison Smith: This has been a good year for biographer’s autobiographies – Richard Holmes, who has written about Coleridge, Shelley and Robert Louis Stevenson, published This Long Pursuit: Reflections of a Romantic Biographer in March, and now James Atlas, biographer of Saul Bellow and Delmore Schwartz, longtime contributor to The New Yorker, and founder of the Lipper/Viking Penguin Lives series, has come out with The Shadow in the Garden: A Biographer’s Tale. It’s fair to say that Atlas knows the North American and British literary worlds about as well as anyone else around, and he brings to his anecdotes an irresistible charm. I love the story he tells about getting taken to task by the great critic Alfred Kazin: “You know what I don’t get about you?” Kazin says, “You don’t stand up for yourself. I’ve read your reviews. You say whatever you like in print, you take on this big book, and then you sit here like a schoolboy in the principal’s office.” Atlas still has something of that schoolboy’s air of enthusiasm and guilelessness, and I am excited to hear him tell more tales of his adventures in biography.

This Week in Books
Read