A Q&A with Laurel Saville, Author of "Unraveling Anne" 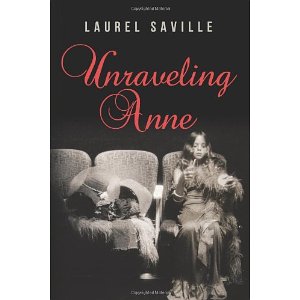 A newcomer to the memoir genre, Laurel Saville tells a heartbreaking story with grace and compassion in Unraveling Anne,the story of her mother's path from California golden girl, model, and fashion designer to alcoholic and, tragically, murder victim. We asked Laurel to tell us more about the process of writing this powerful story, and how her family has responded to her book:

Question: What was most difficult about writing this memoir of your mother’s life?

Laurel Saville: This may sound strange, but I found it most difficult to write about myself. It’s not that I’m particularly private or guarded; I just didn’t think I, as a character, was that important to the narrative. But Bob Shacochis told me, "Without a daughter story, there is no mother story," and that piece of wisdom kept forcing me to put myself in there. Then, in the process of writing, I stumbled on something that was also helpful to me. When I was writing about my younger self, I naturally used my childhood nickname, Lolly, instead of my full name, Laurel. This other name gave me just enough distance to see myself as a character in a story, not as a confessor, and thereby allowed me to write more freely.

Question: The story covers difficult ground, but is done so very lyrically and without sentiment. How did you find your voice?

Laurel Saville: Let me begin by saying that, as a reader, I’m not a big fan of memoirs. In general, I’m not fond of the voyeurism and, rightly or wrongly, I too often am suspicious about the motives of the author. I find the culture of confession that’s so pervasive these days a bit distasteful. Having said that, I am a writer and I have this story and I couldn’t escape the pressure--and desire--to make something of it. But I was determined to try and craft, in this era of reality TV and talk show emotional divestiture, a different kind of voice and narrative arc for covering this challenging territory. I wanted a voice that, instead of being confessional, simply took readers on a straightforward journey that allows them to have their own experience of these events and come to their own conclusions. Having said all that, there is another, simpler answer to your question: the voice is really just my own, and simply reflects the way I am in the world.

Question: You did a lot of research for the book--what was that process like? What were the biggest challenges?

Laurel Saville: Well, first of all, there were not many people left alive to ask questions of, so that makes things difficult. But primarily it’s figuring out where to begin and what leads to chase. There are a lot of dead ends and you also worry that you’ve left important stones unturned. But when I did find the right person or contact, they were universally generous. I remember talking to a harried administrator in Utica, NY, and when I asked about my grandfather’s high school transcript, her voice instantly softened, and within a week, I had his grades in my hands. The owners and restorers of the Spartan Executive airplane that my grandfather designed were so kind to me. I wrote a note to a gallery showing John Altoon’s work, and a week later, I had an email from his widow. And of course, the stories and information from my mother’s cousin Alice, who is the voice of the final chapter, were invaluable. The book could not exist without her.

Question: You’ve written four other books and many articles on design, as well as short stories and essays. How was writing this book different?

Laurel Saville: Content wise, the design books and Unraveling Anne have one thing in common: they are at their essence profiles of creative people andprocesses, and in the case of Unraveling Anne, also a creative time and place. But from a straightforward craft perspective, the difference really comes down to whether the work is fiction or non-fiction. In fiction, you make up what you need. Add a little drama here, create a character to move the narrative forward there. In non-fiction, you collect all these loosely connected bits of information and then you have to find a way to string them together into a credible narrative arc. It’s like making a collage or mosaic: you’re trying to create a coherent whole from parts you’ve broken apart from their native home.

Question: Was your family supportive?

Laurel Saville: I was concerned about their reactions, but it turns out I didn’t have to be. Some members of my family have chosen not to read it, one quibbled with me on a few points of memory, but everyone has let me know they are very glad I wrote the book. This, and the amazing responses I’ve received from a wide variety of readers, are both deeply gratifying and humbling.

California golden girl, a former beauty queen and model-turned-fashion designer whose success and charm were legendary. So how is it possible that such a woman could die in squalor, an alcoholic street person brutally murdered in a burnt-out West Hollywood building