Talking to Arthur Levine About 20 Years of Harry Potter 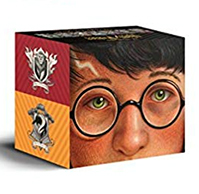 In 1997, Levine's imprint at Scholastic Books, Arthur A. Levine Books, was only a year old--but in the 21 years since, the list of authors he's published reads like a who's who of children's books.  In preparation for this year's 20th anniversary of Harry Potter and the Sorcerer's Stone, and the special new editions illustrated by Brian Selznick, I went to Levine's office and sat down with him to talk about what he originally envisioned for Harry Potter, what he sees for the next 20 years in children's books, and more...

Seira Wilson: For the 20th anniversary editions, how did you decide on Brian Selznick as the illustrator?

Arthur Levine: It’s such an opportunity so we had some brain storming sessions, because it’s the kind of thing where you can ask anyone.  There’s nobody who’s off the table. You can just say, who would have an incredible vision? Who would do something that was great and true to the books and give the fans something that they would love but also would not duplicate the beautiful things that have been done before. Kazu Kibuishi’s covers and Mary GrandPre?’s covers; I think they’re just as great and fresh as they always have been.  So you’re just weighing all these things and…Brian Selznick.  You can’t think of a person who has a bigger, complete vision of things.

When you think back now to the moment when you read Harry Potter and the Sorcerer's Stone for the first time, did you know by, say, chapter five that you were all in or did you have to get to the end of the book to decide?

I think I knew in chapter one that I loved it.  I think just the first couple of lines, the description of Privet Drive and the Dursley’s, I just knew that this was somebody who has a kind of humor and edginess that I loved. And certainly as you go along you see all the other things that she does in the book that are unusual to have in one book.  It’s hard to combine laugh-out-loud moments with real tender moments and then also wrap it around a completely original fantasy world.

So the answer is a little bit of both: I knew in the first sentences that this was a writer I wanted to be reading, but probably not 'til the end did I realize that, wow, this is something extraordinary, I have to publish this.

Do you feel more pressure, either self-inflicted or from the outside, to find the next Harry Potter?

I feel like I’m always discovering the next Harry Potter because I’ve never forgotten what that meant to me, in that moment that you asked me about.  I don’t apply everything that happened to that moment.  That moment was just me reading on a plane.  That wasn’t me…publishing a book that “changed history.” So, as far as that’s concerned, I still read with that same intention of finding somebody who does things in an extraordinary way. A really original way.

Did it surprise you how big Harry Potter became, and how much it changed the reading experience for children's books?

I expected it to be a classic.  And that’s what I said from the very beginning. And that’s how I made the book, and that’s part of why the book looks the way it looks. With Mary GrandPre?’s illustrations, and the gold foil, and the three-piece case, and the illustrations inside; I wanted it to look like a classic. Because that’s what I was thinking.  So, yes, I said Harry Potter would be that.  I said it in the galley, you know, “you guys, you’re going to want to keep this galley because it’s something really special," there’s a line in the galley about that.  [See an image of Levine’s letter from the Harry Potter and the Sorcerer’s Stone galley below].

Do you still work with J.K. Rowling? Chat with her?
I sure do, we had coffee just a few weeks ago!

Who do you think is an overlooked author? Who would you like to see get more attention from readers?

Alaya Dawn Johnson, The Summer Prince.  Actually there are two authors with similar profiles, because both Alaya and Martha Brockenbrough were nominated for National Book Awards, so you would think that would really increase their audiences. And it did, to some extent, but I feel like there shouldn’t be anyone in the world who hasn’t read Martha Brockenbrough’s The Game of Love and Death.

I loved that book. I LOVE that book!

Right!? So you know what I’m talking about! It’s just fantastic. And Alaya Johnson’s The Summer Prince. That’s an amazing book.  Really, she should be mentioned in the same breath as Isaac Asimov. Or Octavia Butler. And Alaya Dawn Johnson. Everyone should know her.

Oh! Jaclyn Moriarty!  She should have been the first person I mentioned! And really, even for J.K. Rowling’s fans, she is so original, and funny, and warm.  This group of books called The Colors of Madeline. The first one’s called A Corner of White.  The most completely delightful, beautifully written, fantastic books.  The second book in that trilogy is the best second book in a trilogy that I’ve ever read.  It’s called The Cracks in the Kingdom.  Best second book in a trilogy ever written.  Everyone should read that. She's about to publish a new group of books for middle graders called The Extremely Inconvenient Adventures of Bronte Mettlestone (October 9, 2018).

It’s been 20 years since Harry Potter was published [in the U.S]--what do you see coming in the next 20 years?

I see a fantastic explosion of diversity in the voices that we’re getting to hear. And I think that’s going to be such a great gift to American literature and the world. To hear these incredible writers speaking… There’s a great flowering, that I think is happening now, and I think over the next 20 years that’s what’s going to be the next great thing. All the time. 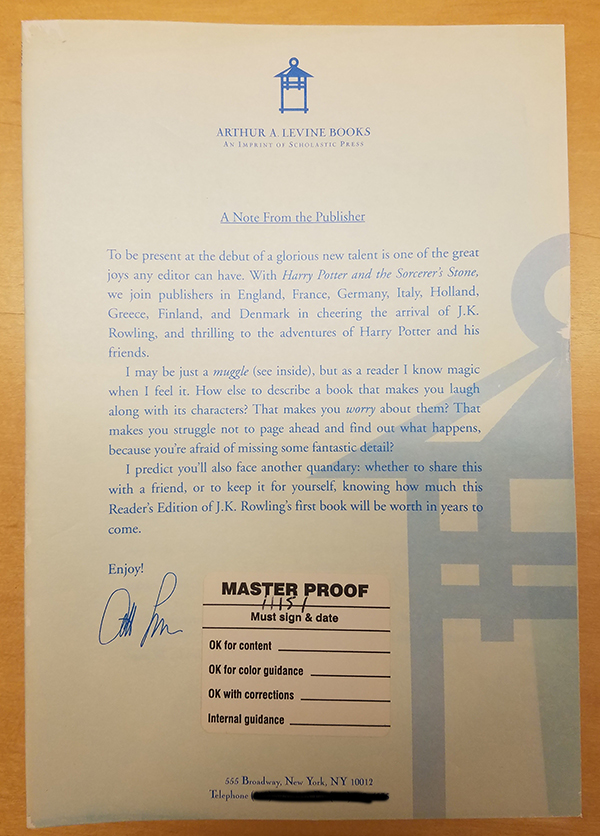