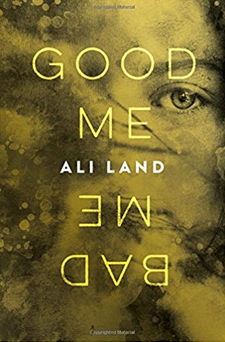 Life is not easy when your mother is a serial killer, especially when you’re the person who ends up turning her into the police. As the trial approaches, Milly tries to settle into her new life with a well-to-do foster family, but it's not a soft landing, and that brings out a side of her that tests just how much she is her mother’s daughter…Senior Editor Adrian Liang says Ali Land's chilling debut, Good Me Bad Me, is one you will want to swap with friends, to debate the ending.

Learn more about today's best books of the month releases below, or browse all of our favorites for September here.

Sourdough by Robin Sloan
Bread is life as the saying goes, and it certainly is life-changing for software engineer-turned-baker, Lois Clary. As Robin Sloan’s latest novel opens, Lois gets a plum gig working at a tech company that specializes in robotics. The money is good, but the longer Lois stays in the role, the more she feels like the product she’s working on. Her only respite is a neighborhood takeout place she orders from each evening, run by two infinitely amiable brothers. When they are forced to flee the country due to visa issues, Lois is entrusted with something that jogs her from her dispassionate existence: a sourdough starter. Armed with this magical mixture of flour and water (it really is magic—it even sings!), Lois--whose fridge and gastronomic knowledge has heretofore been utterly barren—begins to bake. Applying herself earnestly and enthusiastically to the task, Lois finds that she excels at it, and soon she is foisting the fruits of her labor onto eager, gluten-tolerant co-workers, one of whom encourages her to hawk her wares at a local farmer’s market. The cutthroat committee rejects her, but Lois is quickly courted by a mysterious marketplace that ends up exploiting both her tech savvy, and culinary pluck. If all of this sounds a bit out there, it is. In the best way. And you’ll need to steel your suspension of disbelief for a stunner of an ending, of Stay Puft Marshmallow Man proportions. But Robin Sloan’s Sourdough is quite simply delightful. Its overarching message of the importance of pursuing a fulfilling, meaningful life is one you will loave. --Erin Kodicek

The Golden House by Salman Rushdie
The events of The Golden House begin around Obama's inauguration and end in our current time--and it is a novel about our times--but it is also a story steeped in Greek tragedy and the history of cinema. Nero Golden is a wealthy immigrant with three sons who has moved from Mumbai to New York under mysterious circumstances. He takes up residence in a downtown mansion, where he acquires a beautiful Russian second wife (one could argue just as strenuously that she acquires him). Nero, his new wife, and his sons establish their respective places in New York society, and their stories are told through the eyes of Rene, an aspiring film maker who lives across the street and who becomes entangled in the rapidly unwinding drama of the Golden family. What follows is an entertaining and enlightening novel with much to say about modern America. This is a story with roots and antecedents stretching into the past, but it feels as relevant and timely as anything you'll read today. --Chris Schluep

Draft No. 4 by John McPhee
One of the great joys of being a book nerd is the rare offer from an accomplished writer to peer inside their head, to probe the process that makes their work, well, work. The best examples (Stephen King’s On Writing, Anne Lamott’s Bird by Bird, etc.) go beyond the nuts and bolts of prose – how to tell a story in three acts, e.g. – to talk about how they view their craft, however idiosyncratic or replicable. Draft No. 4 falls squarely into this category. With this collection of eight essays, McPhee – the author of Coming into the Country, Encounters with the Archdruid, and countless other celebrated works of longform nonfiction – shares his experiences as a working writer, recalling the methods, tools (mental and otherwise), and relationships that helped him produce some of his most memorable books and articles. It’s less of a how-to than a this-is-how-I-did-it approach, offering plenty of astonishment and inspiration for aspiring writers (and just plain readers), if not easy solutions. An deft blend of art and memoir, Draft No. 4 might seem like the entertaining, amiable reminiscences of a favorite uncle, if it wasn’t also so informative and insightful. --Jon Foro

Sing, Unburied, Sing by Jesmyn Ward
A slamming, heartbreaker of a novel that is rendered with such stinging beauty and restrained emotion that despite the anguish taking place on the page, you won’t want it to end. For her third novel, National Book Award winning Jesmyn Ward, tells the story of Jojo, a young black Mississippi boy raised by his grandparents, who is forced to become a man far before he should because his mother is a drug addict, his father is in jail, and his baby sister needs a guardian. When Jojo’s dad is released from prison, Leonie packs Jojo and Kayla in the car, picks up her meth addled friend and drives north. What transpires is a nightmarish journey that weaves in and out of the present – Leonie’s meth induced highs, when she dreams of her dead brother who was killed by white hands decades ago, and the past -- when a man named Ritchie served time alongside Jojo’s grandfather. Sing, Unburied, Sing shimmers with mythic southern memories to tell a story of the drugged and the damned and the fluttering promise of youth. --Al Woodworth

A Legacy of Spies by John Le Carré
John Le Carré, who you may know from the classic George Smiley spy novels, has returned after 25 years to bring us The Legacy of Spies, an interweaving of past and present storylines that allows new readers a way into these (I'm going to say it… perfect ) thrillers and will have longtime fans swooning. I have loved the Smiley series since I first read book one, so I was more than apprehensive when I heard Le Carré was reigniting the storyline with ‘Legacy’ after so many years (needlessly as it turns out). Peter Guillam, Smiley's most prized assistant, returns with both grace and vengeance as he evaluates life and the lies he has created to survive. Readers don't need to have read the past titles to understand or enjoy ‘Legacy’, but I guarantee you will want to go back and start at the beginning as soon as you turn that final page. --Penny Mann

Coming to My Senses by Alice Waters
At the tender age of 27, chef and activist Alice Waters opened what ended up being one of America’s most iconic restaurants, Chez Panisse. In Coming to My Senses, she traces her unlikely rise in the culinary world, and how her cooking point of view, and French-inspired restaurant, thrived in a time when convenience was king.

"Are We Prepared To...
Read