Rachel Howard on "The Risk of Us" 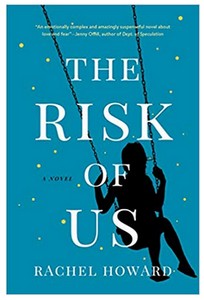 It is only later that the unnamed narrator of The Risk Of Us notices that the adoption binder had requested a family willing to ‘take risks,’ but this weighty disclaimer wouldn’t have necessarily dissuaded someone so desperate to become a mother. And so, she and her husband take in Maresa, a lively young girl who has resided in one house of pain after another. It's a precarious foundation on which to build a family--something that will test the couple's marriage, and their resolve regarding the adoption of this troubled child. Here, Rachel Howard talks about the genesis of this heart-wrenching debut novel.

In the fall of 2015, I walked the south nave of San Francisco’s Grace Cathedral and saw, beneath the soaring stained glass windows, a set of images I would never forget. The black and white photographs were huge, some nearly life size. The children and teenagers in them stared with a steely, honest dignity. These photos were nothing like the smiling, puppyish images of children I’d seen in foster agencies’ brochures. These children were not performing for prospective parents. They were taking back their own stories, both in the photographs and in the artifacts and testimonies below—items like handcuffs and pill bottles that told of institutional neglect, sexual abuse, and also resilience. The show was the first touring exhibition of the Foster Youth Museum, an organization “conceived by current and former foster youth.”

The idea for The Risk of Us came to me a year after seeing that exhibition, and came suddenly. It came as a voice: a nameless woman trying to adopt a girl from foster care, speaking directly to the child, and to the husband, as they faced dire uncertainty about whether they would make it as a family. The idea came with a surge of commitment and hope: perhaps such a novel could make the world of foster care real to people who have not known its emotional complications, its simultaneous hope and pain. It also came with trepidation. I believe that foster youth have not been given the platforms they deserve to tell their own stories. I believe that the child matters most in this story. Why should the novel be told from the foster mother’s point of view?

The answer, for me as a writer, was partly intuitive, partly technical. In the months leading up to the novel, I had been experimenting with the kind of second-person address in which the character speaks to “you”—another character within the story, not the reader. I noticed the way this put the reader in the position of seeming to eavesdrop on an intimate conversation. To me, this created a sense of space—space for the reader to be curious and unpressured. Since the reader was not being addressed, the reader was not “on the spot”—not being asked to have any particular emotional reactions, but free to have mixed or even contradictory reactions.

This seemed to me a way of creating a space on the page for a complicated and unsentimental reality—a reality beyond the puppyish smiles of the children in foster agency brochures. The point of view also enacted the conflict of the story: As the mother tries to address the husband, then the little girl, then both at once, she struggles to figure out how they can move from “you” and “you” and “I” to a true “us.”

My hope was to create a space on the page that was like the cathedral itself: a place where pain and beauty stand side by side.

I can never know if I achieved this, or if my choice to privilege the mother’s voice in this novel was earned. The answer can never be objective, but resides in each reader’s individual response. The faces of the children and young adults from the Foster Youth Museum exhibition still stare at me, and I am glad for that. We need to see them. We need to hear them. Their truths are holy.

The Risk of Us
Rachel Howard
Print Book Kindle Book