Bob Proehl's novel A Hundred Thousand Worlds took me by surprise. I was expecting to enjoy it—after all, the story revolves around a handful of people who come together as they travel cross-country to several comic-cons, and my nerdy soul relished diving into such a tale. But I wasn't expecting to be emotionally moved by the characters and to be astonished by Proehl's smart, evocative writing. The other Amazon editors agreed, and we picked A Hundred Thousand Worlds as one of the best books of the month in July.

So who better than Bob Proehl to write about the pop culture phenomenon that is San Diego's Comic-Con International?

Read on for Proehl's thoughts on standing (or rather sitting at the bar) at the epicenter of geek culture:

Slump shouldered in the hotel bar, Captain America takes a swig of beer.

“Let me ask you something,” he says, because despite it being my first visit to San Diego Comic-Con, I have managed to convincingly pass myself off as something of an expert. “Do you think there’ll ever be a news story about us that doesn’t boil down to ‘look at those geeks’?”

San Diego Comic-Con is the largest, most visible comic con in the country; a mecca of fandom. Tickets go on sale almost a year in advance and sell out with Hamilton-esque speed. The fates of major motion pictures hinge on their Hall H presentation, the moment six and a half thousand fans, who’ve waited out all night to get in, get their first glimpse of next summer’s blockbusters and blast their snap judgments into the Twitterverse. Costumes run the gamut from clever T-shirts to prostheses so large their wearers can’t fit into the exhibition hall.

But the reason the 160,000 attendees at this con, and the millions who attend various comic cons across the country annually, shell out the money each year is only apparent on the inside. In order to understand the weird alchemical thing that happens when you are, maybe for the first time, surrounded by people who love the same things you do, you need to know a little about what it means to be a geek.

The fortunes of fandom have shifted in the last couple years, prompting calls of “Geek is the new chic” and “The geek shall inherit the Earth,” but here’s a little secret: everyone who shows up at a convention has gotten grief for the beautifully outsize level of their enthusiasm. When I think about my experiences as a fan growing up, I drift into the language of the closet. My affection for superhero comics, my meticulously organized collections of Batman and X-Men, my consumption of weird, dark comics in college: all of these were furtive. When I picked up my reads for the week at my local comic book store, I tucked them in a brown paper bag like pornography and rushed home to read them alone in my room. Comic cons represented a kind of coming-out party, a chance to be myself in public.

If this comparison seems strained, it is: hiding your love of superheroes or anime from your friends is fundamentally different from being forced to hide your essential identity. Being picked on for a Spider-Man T-shirt is not the same as dealing with homophobia, transphobia, sexism, and racism on a daily basis. Too often, an older generation of (almost exclusively cishet male) fans conflates these, wearing their teenage persecutions like badges of honor and using them to stake a claim to an imaginary “true” fandom that excludes newcomers who haven’t suffered the same things for the same reasons. These folks reiterate the awful experiences they’ve borne as fans, redirected at people who already deal with crap like this regularly and who come to fandom for refuge. But bullies and self-proclaimed gatekeepers are more likely to haunt Internet comment threads than comic cons, where they’re shut down faster than a speeding bullet.

Comic cons are, or aspire to be, or should be, safe spaces. They are instant and intentional communities. Everyone is there because they love something so much it’s just bursting out of them. And like all loves, these are created out of some need: these fantastic stories of teenage wizards and Amazons and deep space explorers are the things that get some people through the day. We dismiss a lot of it as escapism and in doing so forget that sometimes people need to escape. They need to go somewhere else to get stronger, or to heal. So they can come back and be amazing. Everyone at a comic con understands that. Even if they don’t love the same things, they love each other’s dedication. I’m not into what you’re into, they silently say, but I’m glad you’re so into it.

The bulk of attendees come with friends, or come to meet friends. It’s the thing that’s easy to miss about the all-day lines to get into the biggest panels and events: people aren’t waiting by themselves. They’re on mini-camping trips with their besties, with the families they’ve been born into or chosen for themselves. In hallways and lobbies, the little dead areas of the convention center, internet friends who see only each other in real life once a year compare the loot they’ve scored: the toys and T-shirts and signatures. Even those who come in alone enter knowing all the secret handshakes and shibboleths. If you can’t strike up a conversation with a fellow fan in line, you’re not half trying.

Which is how I end up talking to Captain America. X-Men squeeze in behind me to order a drink. At a table, friends fling pokeballs at whatever rare creatures have wandered in. And Captain America asks me if the outside world is always going to look at conventions like circus sideshows.

I sip my beer, trying to think of a sage answer.

Bob Proehl grew up in Buffalo, New York, where his local comics shop was Queen City Bookstore. He has worked as a bookseller and programming director for Buffalo Street Books, a DJ, a record store owner, and a bartender. He was a 2012 New York Foundation for the Arts Fellow in Fiction and a 2013 resident at the Saltonstall Arts Colony. He has written for the 33? book series and worked as a columnist and reviewer for the arts and culture site PopMatters.com. Proehl currently lives in Ithaca, New York, with his wife, stepson, and daughter. 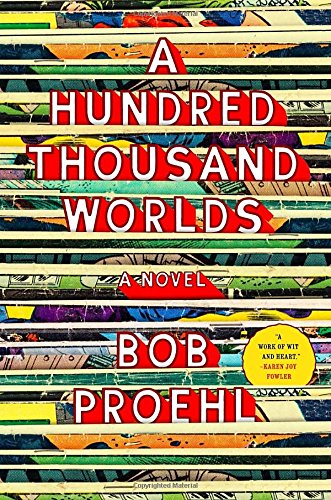 A Hundred Thousand Worlds was chosen by the Amazon Books editors as one of the best books of July 2016.