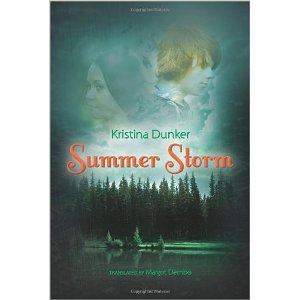 Kristina Dunker is one of Germany’s top authors for teens. She published her first novel at age 17 and has since won many prestigious prizes. Her books have been turned into musicals by fans and been set to music by the New Philharmonic Orchestra in Düssledorf. She has lectured widely in Europe and South America on writing for young people. A bestselling author in Germany, Dunker makes her U.S. debut this month with the publication of Summer Storm, a thriller for teens centered on the hard truths of friendship and trust.

Question: How did you come to be an author at age 17?

Kristina Dunker: I spent the summer when I was 17 with my parents in the Alps. For me, it could not have been more boring. There were no other young people around and I wanted to be with teens rather my parents’ friends. A beach holiday would have been much better than the mountains. There were no discos and I was far from the boy that I loved... so my first book became a dream of the perfect holiday and also a long love letter to that boy who happens to be my husband today.

Question: Did you always know that you wanted to write for teens?

KD: Yes, there was no doubt that I wanted to write for teens. Their problems and adventures were naturally ones that I had too. Extreme feelings, the special importance of close friendships, trust, and the power of falling in love for the first time gripped me. I was full of crazy ideas and was open to the endless possibilities of life. Even the experience of making mistakes was great because I had the freedom to laugh about it.

Question: Has your outlook changed over the years?

KD: Though I'm grown up now, my view to the world is still -- at least I hope -- a young one. I am still interested in all of this stuff. And to be quite honest, the themes that people my age talk about: cars, money, etc., are not interesting to me to write about, so I stay close to where I began. Plus, I love going to schools and talking to teens.

Question: Which of the themes that you deal with in your books do you think matter the most to teens today?

KD: First love, dreams and fears, unwanted pregnancy, homosexuality, divorced parents, rap and hip hop culture, extreme sports, etc. The success of my books in Germany is largely a testament to how many teens find themselves in tough situations. I of course haven’t experienced all of the themes I write about myself, but I like to listen and learn.

Question: Do you think it’s harder to be a teen in today’s world than it was, say, 100 years ago?

KD: I don’t exactly know what it was like to be a teen 100 years ago, but I think that today teens grow up faster simply because there’s less time to experiment with and examine things. When you think about ALL of the things teens today have to fill their free time with, you realize how little time there actually is for them to just get to know themselves.

Question: You give a number of readings in schools--what’s your most memorable experience from doing this?

KD: I was presenting in front of a class of teens that were clearly not into reading (or at least admitting to it)--they were lounging around and complaining. But somehow I managed to get their attention and they were completely engaged. At the end of the hour, a young man came up to me, laid a cigarette on the table and said "This is for you! That was really something!"