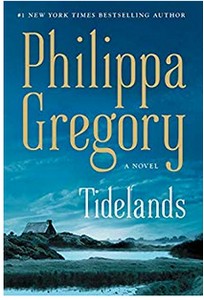 Philippa Gregory, best known for The Other Boleyn Girl and other tales of Tudor-era intrigue, returns with Tidelands. While her heroine in this first installment of the Fairmile series is not royalty, Gregory is still very much focused on illuminating women history has forgotten. In this case it’s Alinor, a single mother trying to make ends meet in 17th century England, and finding out just how perilous it can be to be extraordinary among the ordinary. Here, Ms. Gregory talks about how not being tethered to a particular historical muse changed the way she wrote this fascinating new family saga.

A blank page, a new series, a head full of ideas, a huge file of research, and a heart full of passion: it’s a great way to start a new book - and this one is quite different from my other beloved novels of the previous 20 years.

As soon as I realized that I was not going to write a fictionalized biography, based on a recorded historical character, I realized that I had huge, new opportunities for event (since this was an imagined life) and even writing style.

The event aspect is obvious: now my characters can do anything - but the power of accurate history still holds me tight. They can’t do anything that would be unreasonable for their characters in this period in time. Though my heroine cries out to me to write her life as one where she should fight for her freedom, the idea of women’s political power or legal defense is far in the future – all she can realistically do is hope to survive, and plot and contrive her way through the terrible dangers that 17th Century women faced.

My writing style has changed too. For years now I have written in first person present tense as a way of putting the reader right in the shoes of an historic woman. There is so much to overcome at the start of an historical novel, there is so much that has changed between their time and ours, that one of the ways of clearing these difficulties is just to jump them – put the reader in the historical scene, as one of the characters, and start from there.

But with this new novel I found I wanted the greater freedom to see scenes that my character did not see, to narrate in the third person rather than the first. I use this very sparingly – mostly the story is told from her point of view – but I am not locked inside her head and there are scenes where we follow other characters into their worlds that the heroine never sees. This causes me the usual authorial difficulties of how to intersect a scene in one place and time with one in another, but like jump-cuts in the cinema it makes it possible for one story to be an ironic commentary on another. It also gives me a chance to let the reader eavesdrop on other people’s lives, and even what they say about my heroine – that she will never know. It adds a dimension to the telling of the story that I’ve really enjoyed.

Here’s a tiny instance of a conversation between my heroine’s husband and her lover:
‘She would not come looking for you.’
‘She has the Sight, Fool. She can see me if she pleases, unless there is the deep sea between us. She cannot see me through deep water; but if ever I sail into Tidelands again the mere will boil beneath my keel and throw me up like sea wrack before her door and she will destroy me with one look.’