Behind a Great Cover: Gabriel Tallent's "My Absolute Darling" 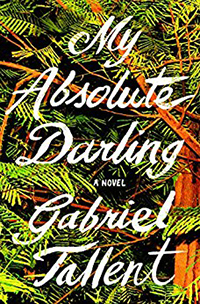 The cover of My Absolute Darling, Gabriel Tallent’s debut novel, is instantly intriguing: seen up close, toxic-green fir branches extend away from an orange-barked tree trunk while spikey pine needles lap over the old-fashioned cursive of the book’s ambiguous title. Beyond the boughs lies an inky blackness that suggests night. Though it would be hard to guess what this book is about simply from looking at the cover, the scene communicates, in an almost tactile way, a slightly off-kilter view of nature in an atmosphere of mystery and threat. Why would anyone be that close to a prickly tree, this cover makes you wonder? Well, why indeed. (Click the image on the right for a larger version.)

That effect is very close to what Riverhead art director Helen Yentus hoped to achieve with the design for the cover of My Absolute Darling. “It’s like running through the woods and getting smacked in the face,” she said. Those acid greens and brilliant oranges have a lot to do with the cover’s punch. No millennial pink here: “Super-saturated color and darkness beyond the leaves helps to show you that there’s something else happening. It suggests a kind of darkness or intensity,” she said in an interview shortly before Riverhead published My Absolute Darling last week. “This does not feel serene. We tried to push the colors to add to that sort of frenzied look.”

Gabriel Tallent is pretty young and, well, green, to be getting the kind of attention he’s received for his first novel. Alexandra Alter profiled Tallent on the front page of the New York Times’s Arts section. Stephen King said "The word 'masterpiece' has been cheapened by too many blurbs, but My Absolute Darling absolutely is one.” Entertainment Weekly proclaimed it “an unputdownable coming-of-age novel.” Here at Amazon, it’s the Books Editors’ number one pick for Best of the Month – the overwhelming favorite amongst very strong contenders. The consensus was that this story of a 14-year-old girl who is being raised – and abused – by her brilliant, survivalist father in the wilds of Mendocino, deserves every superlative. It’s the most frightening, thrilling, surprising and immersive book many of us have read in years.

Editors at Riverhead felt that excitement from the start. Yentus says, “The challenge is always to make something that is really iconic, that’s going to stand out. When it comes to these books that are obviously special, it gets more accentuated. I knew coming into it that we needed something that was really eye catching.” Yentus, who has been at Riverhead for six-and-a-half years, says she was initially guided by her own experience of the novel. “I’m a reader first. I get really gripped by these books. The question was how to communicate what I felt in a static image. In this book it was especially important, because the feeling of reading it is so intense. The challenge was to find the right tone, and not make something scary or off putting. The book itself has that kind of duality. “

Yentus has been responsible for many notable covers at Riverhead, including the photographed cover for Eat, Pray, Love that showed the words of the title spelled out in prayer beads, pasta and petals. Yentus recalls that My Absolute Darling went in a very different direction from the outset.  Sarah McGrath, vice president and editor-in-chief at Riverhead, told her she felt that nature was like another character in this book.  “The woods, the sea, they were going to play a big part in it.” So Yentus and designer Jaya Miceli “started from a place of nature.” But images of nature tend to be something you’ve seen before. Many of the images they considered “felt like a fairy tale, or too still.”

One possibility would have been to put an image of the young girl who is the heroine of the novel on the cover. But although Yentus says “I don’t rule anything out; it’s possible to do that in a new and interesting way,” she hasn’t put a woman on a cover in a long time. “I think there’s something to be said for allowing the reader to make their own character up. By not being literal about it in that way gives [the reader] an extra push to come in.” The final cover image does just that. “It’s beautiful but it’s dangerous,” Yentus says. “It allows you to enter this narrative, figure out what is happening.” 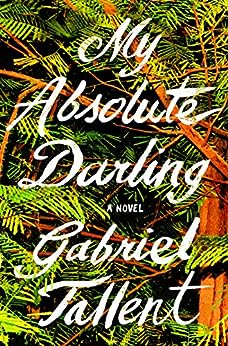