Jami Attenberg on "All This Could Be Yours" 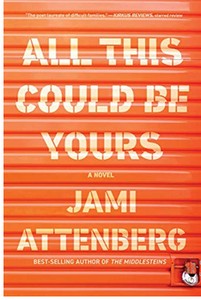 By all accounts, the mysterious and mercurial patriarch of the Tuchman family is a “bad man.” To his wife, this quality could actually be a turn-on, despite being the occasional victim of his basest impulses. His children, on the other hand, have borne the brunt of his pernicious nature, marking them in ways that have followed them into adulthood. So when Victor finds himself on death’s door, there’s not much love lost; only one last opportunity to try and discover what made this toxic man tick, and, with any luck, escape the lingering effects of his dubious legacy. You may have gleaned that Jami Attenberg’s All This Could Be Yours is not the cheeriest of reads, but it accomplishes what the best novels do: It helps us to make sense of life’s messiness, and find hope in the most hopeless of places. Here, Attenberg writes about what she feels was the biggest risk she took writing this book, which was writing about the city she moved to.

One of the greatest challenges of writing my seventh book, All This Could Be Yours, was setting it in my recently adopted home of New Orleans. I had lived there full-time for two years when I first started writing this book and I was nervous about trying to capture both the magic and the flaws of this remarkable and beloved American city.

I waited as long as I did to start writing the book because I wanted to get to know the city better.  I needed to spend a few summers here to experience the city beyond its tourist season. (In fact, I ended up setting the book on an extremely hot day in August.)  And I suppose, deep down, I was waiting for someone to give me permission to write the book – but as with any artistic endeavor, the only person who will ever give you permission is yourself.

Ultimately my solution to the question of writing about the city from an authentic (for lack of a better word, because this is one of my least favorite words ever) place, was to begin writing about New Orleans as an outsider. The family I created – the Tuchmans – have all arrived in the city at various stages of their lives. Victor and Barbra Tuchman have been there just a few years, on exile from Connecticut, escaping a scandalous past. Their son Gary and his wife Twyla moved there after Katrina, for Gary’s job in film. And Alex, the daughter of the Tuchman family, is just a visitor in town, part-tourist, part-griever, arriving soon after Victor’s heart attack and hospitalization.

Almost immediately after I established these characters, native New Orleanians began insistently popping up in the book, demanding to be heard. I watched as they helped me detail the landscape, how their perspective opened up All This Could Be Yours in ways I hadn’t imagined possible. The book flourished in front of me, and it came became the story I wanted to tell but hadn’t known I could. Maybe in the end that’s who I needed permission from most of all – the characters.