Richard Adams, the author of Watership Down, died on December 24, at the age of 96. A career civil servant, he began writing his first book at a relatively late age. “I was 52 when I discovered I could write,” he told the Guardian newspaper two years ago. “I wish I’d known a bit earlier. I never thought of myself as a writer until I became one.” 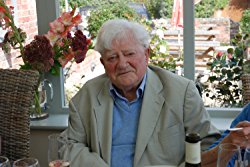 Watership Down, his first, bestselling novel, was based on a story he told his daughters during long car rides. Published in 1972, it concerned the lives of a community of rabbits forced to leave their warren and find a new home. Intensely anthropomorphic, linguistically inventive, and sometimes violent, the tale won two major British awards for children’s and young people’s literature but was also widely read by adults. The novel was made into an animated film in 1978, with the voices of the rabbits Fiver and Hazel read by John Hurt and Richard Briers.