A Conversation with Riley Sager, author of "Final Girls" and "The Last Time I Lied" 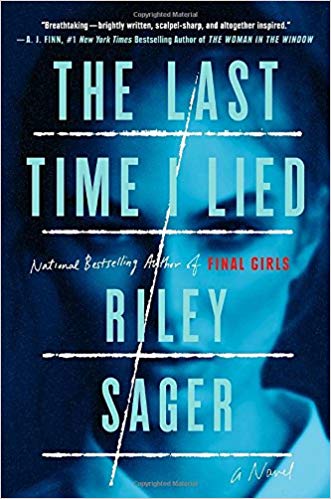 Riley Sager is an author who has found a lot of success in a short time. Sager's debut Final Girls was an international best seller that was lauded by Stephen King ("The first great thriller of 2017.... If you liked Gone Girl, you’ll like this.). Now, with last week's publication of The Last Time I Lied, which creepily takes place at a summer camp (both in the past and the present), Sager is well on the way to becoming a household name.

We caught up with the author to talk about a variety of topics, including how it feels to have the movie people clamoring over you.

Where did the initial idea for this book come from? Have you ever been to summer camp?

I went to summer camp for a week the summer I was ten. I was not a fan, to say the least. Everything about it—from the leaking tent to the terrible food to the mosquitoes—was not my idea of a good time. All I really wanted to do was sit by the lake and read. While all the other kids eagerly lined up for swimming lessons, I’d still be in my shorts and camp t-shirt saying, “You have fun. I’ll be with a book under that tree over there.”

The Last Time I Lied was inspired by the book and movie "Picnic at Hanging Rock," which is about three girls and a teacher from an Australian boarding school who vanish during an outing. I was drawn to the idea of a group of girls simply disappearing and how something like that could traumatize the people left behind. I set the novel at an all-girls summer camp because it felt to me like a wonderfully evocative location for a story about missing teenagers. Thick forests. A dark lake.  The sense that something might be lurking just outside the cabin. Basically, I wanted it to have the feel of a really juicy campfire tale.


When you’re writing, do you have a particular reader in mind; are you actively trying to scare them?

I once read an interview with Stephenie Meyer in which she said, “I don’t think I’m a writer; I think I’m a storyteller.” I feel the same way. When I’m working on a book, I always keep the reader in mind. People who love a good story—that’s who I write for. As an avid reader myself, I love getting swept up in a story so much that the real world fades away. I try to do the same thing as an author. If readers keep turning those pages, then I’m doing something right.

I think the scariness of my novels just happens to be a byproduct of the stories I’m drawn to. I love things that are mysterious and spooky. Unsolved mysteries and folklore and legends. They’re really fascinating to me as both a reader and a writer. So, while it’s not my primary intention to frighten readers, I will say that it’s a wonderful job perk.

How was writing this book different from writing your last one?

My first thriller, Final Girls, was easy to write, all things considered. I knew what kind of book I wanted it to be and made it happen. The Last Time I Lied was much more difficult. Again, I knew what I wanted it to be. I envisioned something narratively complex, with the past always creeping up on the present and the idea of truth being hidden beneath a shifting layer of lies. The problem was that I didn’t know how to make that happen. There was a lot of trial and error involved—inserting some things, tossing out others. Massive chunks of the book were rewritten several times. The finished product is so much different than what I started out with. Yet it ended up being exactly the book I had envisioned from the very beginning. It just took longer to get there.

Your Twitter account describes you as “Writer. Reader. Movie lover.” What kind of movies do you watch?

I will see literally anything, from the latest summer blockbuster to a small foreign film with two characters and one set. I’m fascinated with film from a cultural standpoint. In America, we don’t have royalty. We have movie stars. And some of the films they star in shape the country in such interesting ways. For instance, the last movie I saw on the big screen was "Jaws." The downtown movie theater where I live shows it every summer. Not only is it a masterpiece, but it was the first summer blockbuster. After its release, everything was different. That one film completely changed the way Americans go to the movies.

Your book Final Girls is on its way to being a film (with Universal). What was it like when you realized your vision would hit the big screen?

The film version is still in the early stages of development, and in Hollywood there are hundreds of ways in which a project can get delayed. But I certainly hope a movie gets made. Writing is such a wonderful, crazy profession. My job is to create something out of nothing but words. The idea of seeing this thing I built by putting words on a blank page brought to life on the big screen is terribly exciting.

And now The Last Time I Lied has been picked up by Amazon Studios. What were your thoughts when you heard the news?

I was elated. Just over-the-moon excited. Amazon Studios has quickly made a name for itself in the world of movies and television. I loved what they did with "Wonderstruck" and "The Marvelous Mrs. Maisel," and "Transparent" was downright revolutionary. Right now, the idea is to adapt The Last Time I Lied into a limited series, which is the perfect medium for it. When I spoke with the creative team at Amazon Studios, I was impressed by their vision for the story. They understood what I was going for in the book and truly want to bring it to the small screen. I can’t wait to see the end result.