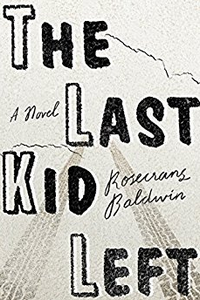 Rosecrans Baldwin's latest book isn't his first novel, but he's probably best known for Paris, I Love You But You're Bringing Me Down, a chronicle of his (mis)adventures as an adman in the City of Love (fun read, by the way). The Last Kid Left is being described as a "twenty-first century Puritan witch-hunt." In it a teenager is accused of a crime he may or may not have committed, and his girlfriend becomes collateral damage due to the town's insatiable appetite for every sensational detail. It's a cautionary tale for the type of world we now live in, where someone's misfortune becomes someone else's favorite reality TV show. Here, Mr. Baldwin talks about the genesis of the novel, how it's actually more love story than police procedural, and more.

The Last Kid Left is set in the present day but was inspired by a true crime from the 1930s. What can you tell us about the original case and how it inspired you?

In the late '30s, a 19-year-old kid from New England showed up in New Jersey with a pair of corpses in the trunk of his car. He confessed to killing them, a local doctor and his wife, in a home invasion gone wrong, then he drove around for days, looking for a place to ditch the bodies. Subsequently he was schlepped home to his tiny village, put on trial—and then everything spun even further out of control. His story changed, the case changed. Other people got roped in, including his underage girlfriend, who happened to be the daughter of the local sheriff's deputy. Events became lurid, let's say.

I discovered it in an old LIFE magazine. I couldn't stop staring at those pictures. Twenty-two photographs in total, spread over two pages, that told this story I was amazed by—murder, crazy love, madness. I couldn't get it out of my head.

Why did you choose to update the time period? Did it lead to any unexpected—or unexpectedly fruitful—decisions in how you told the story?

I always knew I wanted to write about it, I just didn't know how. I started working on this book seven years ago. I told myself I wouldn't learn anything about the case that wasn't in those 22 pictures. I wanted to use them for inspiration, that's it. Initially it was a historical novel, half In Cold Blood, half Ethan Frome, but I couldn't get anywhere with it. Too dry, too lifeless.

Then I started to focus less on the murders, more on the characters. Many of the images are of the young woman, the boy's girlfriend. She's 17 at the time. For whatever reason, the press decided to make her into a sex object. Posing her in a bathing suit. Posing her for headshots, or holding up a lurid newspaper headline while laid out on a rug. It was all pretty disturbing, and not once is she interviewed, given a chance to say anything. But the magazine notes how her love letters to the boy were read out loud in the courtroom—which means their tiny village, and subsequently the world (the story went viral, as much as it could in those days) knew all of her desires, her secrets.

That's when I knew I had a story that was timeless—1930s, or Greek drama, or 2017—it could work today just as well as back then. And once I figured that out, it just started to click.

The story opens with a police detective discovering two dead bodies in the trunk of a wrecked car, putting the driver in jail, and digging into the investigation. But I wouldn't call The Last Kid Left a straight mystery or police procedural. Would you agree? Did you think about genre as you were writing the book?

I wanted to borrow elements of the mystery and procedural for framing—but this is a love story in my mind, a social novel with two teenagers wildly in love at the core (as only teenagers can be). It's a novel for all the characters, young and old, about what's left behind when our defenses are stripped away, whether by time, addiction, society. If anyone, I probably had Graham Greene in the back of my mind. So many of his novels, even his most literary, combine terrific characterization with a plot-driven story, and just as much humor as dread. I've always thought some of his "entertainments" are just as moving and rich as his more "serious" books.

You've written a novel about a bereaved neuroscientist (You Lost Me There), a memoir about working in advertising in Paris while not knowing how to speak French (Paris I Love You But You're Bringing Me Down) and now The Last Kid Left, a murder-mystery–cum–big-social-novel...what should we expect next from Rosecrans Baldwin?

I'm working on another novel. I've got the smallest, crummiest of an idea what it's about, but I'm excited. It's called Revenge City, at least for the moment. Hopefully it won't take me seven years to finish.