Get Ready for Dystopian Nonfiction 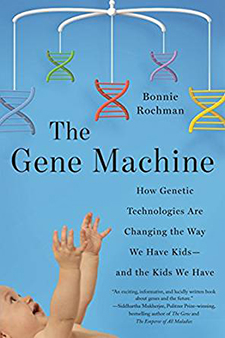 It sounds a little like something you'd hear about on the Home Shopping Network, or maybe a 30-minute infomercial on your local cable sports network in that dead zone between football and baseball seasons: "CRISPR: An easy and cost-effective way to manipulate... your genes"? But it's not science fiction, or dystopian fiction. It's where we find ourselves.

As the father of a preteen boy, I've seen enough Godzilla movies to understand that our capability often outpaces our foresight, and genetic manipulation opens the door to unimaginable possibilities. Where once parents could choose to know the gender of their unborn baby, our understanding the human genome can now forecast disabilities and predisposition for particular diseases later in life, including cancer. The science is complex and confusing, and the ethical dilemmas are self-evident.

Bonnie Rochman has witnessed the advance of gene technology first-hand - as both a journalist and a mother - and her recent book, The Gene Machine, expertly unravels this brave new world of family engineering, from both scientific and human perspectives. We asked her about some of the Big Questions looming for future parents.

Call me sentimental: I have a copy of my daughter’s chromosomes tucked away in my desk drawer, between my Forever stamps and my stationery collection. [for the record, so do I - ed.]

The squiggly lines are a black-and-white depiction of her DNA, of what makes her tick. It’s these biologic bits of abstract art that first got me thinking about genetic information as it relates to parents and children: Who has the right to a child’s health data? Does access to genetic insights empower or provoke anxiety? In the information era in which we live, is there such a thing as too much information?

As Time’s former parenting and health columnist, I had the opportunity to dive into these questions, exploring the continuously evolving array of genetic tests available before, during and after pregnancy, as well as the profound ethical issues that they spark. The more I reported on these issues, the more I realized that hard-and-fast answers are often in short supply, though the questions keep coming. So I wrote a book about this new world of making babies and how these new technologies are reshaping what it means to be a parent.

Is it okay to allow would-be parents to reject embryos because they have a genetic mutation that may — or may not — lead to cancer decades down the road? Genetic technology has been used for years to allow would-be parents to select embryos that haven’t inherited a serious or fatal inherited disease. But is it ethical to allow moms and dads to employ that same technology to avoid giving birth to a child who is only at greater risk — not certainty — of developing disease as an adult? Is that playing God or sensibly deploying technology to potentially halt disease?

The Gene Machine: How Genetic Technologies Are Changing the Way We Have Kids--and the Kids We Have

Time for a pop quiz: Do you think it’s good, bad or inconsequential for a baby to be born blind or with an intellectual disability? Most people I’ve polled choose “bad.” As Paul Lombardo, who studies eugenics, says in my book: “If I did a survey of most people I know, of people who are compassionate and not mean-spirited, most people would say there are some conditions that children really shouldn’t be born with if there is a way that we could avoid this.” And yet some parents don’t see conditions such as deafness or dwarfism as a disability; they view them as a culture and actively try to conceive kids who will share their disability.

Should news of a genetic mutation that increases a child’s risk of an adult-onset cancer be shared with parents of a newborn? Current guidelines say no, that doing so infringes upon the child’s right to an “open future.” But say that a BRCA mutation is discovered that ups a baby girl’s risk of developing breast and ovarian cancer when she’s grown. It’s likely that she inherited that mutation from one of the parents — let’s say from her mother. If her mom is unaware, she won’t know to take extra precautions: to increase her screening, for example, or to perhaps follow in Angelina Jolie’s footsteps by opting for a prophylactic mastectomy. Keeping the child’s genetic data from her parent could result in harm to the mother. How to balance those conflicting interests?

The Gene Machine: How Genetic Technologies Are Changing the Way We Have Kids--and the Kids We Have
Bonnie Rochman
Print Book Kindle Book