Matt Bellassai: 10 Books That Make Me Laugh Every Single Time 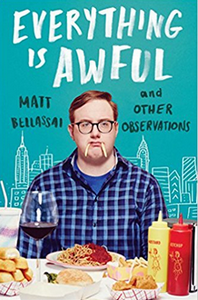 Matt Bellassai’s name probably rings a bell for many of you; he is the first ever recipient of the People’s Choice Award for Favorite Social Media Star and host of the hit web series "Whine About It,” where he complains about various and sundry things while swilling wine (of course). When most of us do this, it's annoying, but Bellassai has made bitching an art form, and Everything Is Awful: And Other Observations elicits some much needed belly laughs. Who does a comedy writer turn to when he needs a good chortle? These are the books that tickle Mr. Bellassai's funny bone.

We Are Never Meeting in Real Life by Samantha Irby: Honestly, Samantha Irby is so funny, it makes me want to kick someone in the face out of visceral jealousy that I will never be as entertaining or as charming or as hilarious as her. If I wasn’t so busy relating to every word she writes, I’d be absolutely furious.

You’ll Grow Out Of It by Jessi Klein: Jessi Klein makes me feel like I wasn’t the only awkward gangly girl in overalls who would grow up to be an awkward gangly woman in adult overalls. Even though, let’s face it. Nobody really grows out of their uncomfortable phase. Except for, like, David Beckham. He’s cooler than all of us.

Don’t Get Too Comfortable by David Rakoff: I could open to any page in any David Rakoff book and laugh endlessly. Like David Sedaris, but with more self hate and outer rage. Also, he worked as a hotel cabana boy for one of these essays, and if that’s not commitment to the craft, I don’t know what is.

Everything Is Awful: And Other Observations

Intimacy Idiot by Isaac Oliver: I would say this book will make you feel better about your own shitty love life, but honestly, Isaac is out here experiencing the world (Hello! He has sex with a dolphin furry!) and you’re probably at home with your greasy fingers congealing inside of a half-empty Cheetos bag. Get on Isaac’s level.

The Misadventures of Awkward Black Girl by Issa Rae: I mean, Issa is a Golden-Globe-nominated Cover Girl now. I’m not saying that this book can help you become a critically-acclaimed beauty representative, but I’m not not saying that either.

Let’s Pretend This Never Happened by Jenny Lawson: Honestly, this book is my bible. I pray to it every night and occasionally Jenny speaks to me through burning bushes. She is the funniest writer to ever exist and the queen of sentences that go on and on forever but you don’t care because they’re amazing and hilarious.

I Was Told There’d Be Cake by Sloane Crosley: I’ll defend any book that has cake in the title, and I’ll also defend Sloane Crosley with my own two fists. She makes being hapless feel genuinely delightful.

This Is Really Happening by Erin Chack: Erin has the unique talent of making her audience both laugh and sob uncontrollably in the very same paragraph. Also for pooping outdoors, avoiding bears, and kicking cancer’s ass. She’s a hero.

You Can’t Touch My Hair: And Other Things I Still Have to Explain by Phoebe Robinson: Few people are qualified to tell you how to live your life more than Phoebe Robinson. Mostly because she’s a badass. But also because you’re pathetic.

I Feel Bad About My Neck by Nora Ephron: Nora Ephron will always be my queen. Sometimes, when I close my eyes, it’s like she and I are sitting on the sidewalk, with scarves covering most of our flabby neck skin, wondering if we’ll ever feel young again.

Everything Is Awful: And Other Observations
Matt Bellassai
Print Book Kindle Book

Ten Years after "The...
Read