Omni Daily Crush: "Bigfoot: The Life and Times of a Legend" 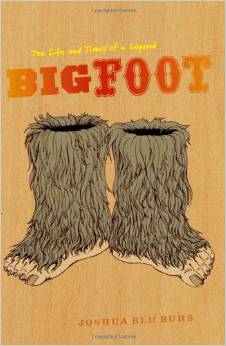 If I had to choose between the existence of Bigfoot or the Loch Ness Monster, I'd take Bigfoot. The obvious choice, hands down. For every reason that Bigfoot is awesome:

there's one why the Loch Ness Monster is not:

Now signs indicate there's the largest resurgence of interest in the hirsute hominid since the Six Million Dollar Man made him an international sensation. (Note: this will happen after the werewolf craze that sweeps the nation, once this vampire thing has run its course. I have a sense for these things.)

The first flare was last year's fantastic corpse hoax, and now comes Bigfoot: The Life and Times of a Legend by Joshua Blu Buhs (The University of Chicago Press). Buhs isn't on the cryptozoologist's quest; there's no squatting and hooting in the woods, nor gripping of infrared cameras and parabolic mics. He takes the cultural fork, respectfully--though skeptically--examining the origins of Sasquatch folklore, the obsessives who chase him, the fakers who fake him, and what the fuss says about our society and shifting attitudes toward everything from the environment to the economy. Meticulously researched, Bigfoot features plenty of photographs (though not so many of the monster), and comes bound in cool, woodsy end-papers.

Recommended for fans of The Legend of Boggy Creek and David Skal's The Monster Show: A Cultural History of Horror, as well as all the '70s kids who searched for Sasquatch tracks in the woods behind their houses.