Non-believers generally fall on a spectrum from militant to utterly disinterested, but some, like New Yorker Oliver Broudy, truly care about religious faith. To their immense credit, they tend to be actively curious listeners with an overt willingness to suspend disbelief and approach the faithful with the peace offering of an open mind, in an attempt to understand better how the other half lives.

Broudy is fast becoming the essayist of record for such generous atheism. In the past eighteen months, his Kindle Singles have explored this theme through the lenses of three unique narratives, building a cohesive body of work that portends Broudy's emerging mastery of the long-form, high-stakes, nonfiction narrative. 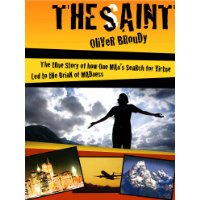 The Saint (also available in Spanish as El Santo) profiles James Otis--a wealthy Gandhi devotee and collector of Mahatma-related memorabilia--a seemingly routine journalism gig that takes Broudy halfway around the world and through a whiplashing gauntlet of emotional crests and troughs. Forced to play friend, protector, fixer, PR agent, and a host of other duties on Otis's behalf, Broudy weathers lies, danger, and difficult self-discovery, emerging from his Gotham ennui with a tale that succeeds as profile, travelogue, and tale of true adventure.

On its surface, The Codex is a coyly unfolding narrative of Broudy's trip to Prague in pursuit of the meaning of a strange book, "a book so explicit that it would be banned by any public library, a book whose pages chronicled the extinction of mystery, and at the same time spawned new mysteries just by existing." Featuring an outspoken cosmetic surgeon--a mysterious artist of the female form who may provide the key to Broudy's own mixed feeling about adulthood--it employs gorgeous prose, a keen succession of nested structures, and a parade of scalping insights into modern life. 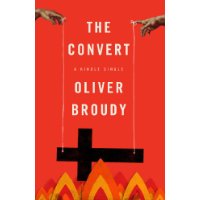 Most recently, The Convert--our top pick for the Best Kindle Singles of 2012--explores one man's brutal "odyssey from atheism to belief." Erin Mounsey is a survivor of horrific burns whose backstory is widely available online, and whose eventual conversion must rank as one of the most dramatic since that of St. Paul himself. Broudy's novella-length profile reads as if it were almost palpably difficult for him--as an atheist--to write, and yet it's so rich, virtuosic, and memorable that the temptation to shout its highlights from the rooftops faces off against the contrary desire to give almost nothing away, the better to let interested readers discover its deep well of poignantly challenging charms for themselves.

All told, Broudy remains a non-believer. But he's no Richard Dawkins or Christopher Hitchens: no dismissive sneering here. Rather, Broudy wants to understand, and it's this desire--realized in sinuous prose and wonderfully unexpected insights--that distinguishes his extended essays. If there's a more accomplished chronicler of existential ambivalence alive today, please bring him or her to my attention. In the meantime, I'm much more interested in reading Oliver Broudy's next failure than most contemporary essayists' next personal bests.