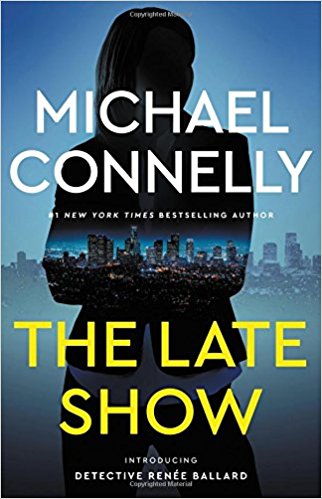 One of my favorite reads last month was an early copy of Michael Connelly's new novel The Late Show. The book is the start of a new series, featuring Renée Ballard of the LAPD, and fans of Connelly are going to love it. In my opinion, he just keeps getting better and better.

I reached out to the author to talk a little about his new series, his new protagonist, his writing schedule, and even what shows he likes to watch.

Chris Schluep: First of all, congratulations on a great third season of “Bosch.” It’s the best one yet.

Michael Connelly: Yes, I am really happy and proud of the show and the third season. I’m a pretty harsh critic when it comes to my own stuff or things that come from my work. I have to say the show has gotten better from season to season and that’s pretty rare. Now we have to make the fourth season the best yet.

CS: How did Renée Ballard come to be?

MC: She came from a need inside of me to do something different and at the same time the inspiration felt from knowing an LAPD detective named Mitzi Roberts. She’s graceful and fierce and she has worked the midnight shift. Through her, or because of her, I came up with Renée Ballard.

CS: What kind of person is Renée?

MC: I like to start my characters with a one word description. For Renée it would be fierce. From there I could extrapolate and throw in descriptors like compassionate, graceful, undaunted and haunted. These all come from different psychological sectors of her life, but when you combine them I think they are the ingredients of a good and interesting character. Before L.A., she grew up on the surfing shores of Maui and that sounds pretty romantic. But she spent many of the nights sleeping on the beach and following an itinerant father and a virtually non-existent mother. Most people escape to Hawaii; she had to escape from it to find her calling.

CS: Describe what “The Late Show” refers to. Why did you decide to have her work the late show?

MC: The midnight shift in Hollywood is nicknamed the late show because Hollywood has so many bizarre denizens and they tend to come out late at night. There is a level of bizarre entertainment to it and thus the nickname. What drew me toward a story in which I would follow a detective on the late show is the idea that the detective often works alone and handles all calls for a detective, so the night could run the gamut from burglar to murder and everything in between. After many years of writing about a detective who only handles homicides, that freedom to write about whatever crime was of interest to me was a big draw.

CS: How does it feel to be sending a totally new character and series out into the world?

MC: In my head I think it’s about time. I’m very lucky. I get to write what I want and I certainly love writing about Harry Bosch and Mickey Haller but it’s pretty much been all them for almost ten years. I really felt the need to come up with a new character and I am quite excited about sending Renée out into the world to see how she does.

CS: Are you working on the next book with Renée Ballard?

MC: I am just finishing a book for the fall that will feature Harry Bosch but has Mickey Haller, the Lincoln lawyer, thrown in and a visit from a character from early in the series — Jerry Edgar.

CS: How do you juggle your schedule, in the writers’ room v novel writing?

CS: Is there a typical work day for you?

MC: Just as I mentioned above. Start with book writing, then get into the TV show. They play off of each other in a way. I think one inspires the other. A really good day for me is to write my book for about four hours, go to the writing room for about four hours and then maybe come back to the book to finish the day for a few more hours of it.

CS: What’s ahead with Bosch Season 4? Any hints for your audience?

MC: Well, Season 3 left some big loose ends and they will be carried over and tied up. Then we are also tackling the book Angels Flight which I love because it takes Bosch across so many iconic locations in Los Angeles. I can’t wait to start filming.

CS: Are there any Amazon Prime shows that you watch as a fan?

MC: I am totally addicted to "The Man in the High Castle." I have binged both seasons in the weekend they came out. And I really like "Patriot," which is a pretty unique show. Kurtwood Smith is a hoot. And of course, I love watching Jeffrey Tambor in "Transparent." Going back to "Larry Sanders" and "Arrested Development," that guy has had an amazing run of great comedic and socially important roles.