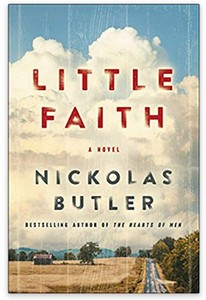 In Nickolas Butler's latest, a family, no stranger to grief, faces another devastating loss if they cannot save their grandson from his well intentioned, but dangerously misguided, mother. Here, Butler talks about what inspired him to write one of our favorite novels being released in March, Little Faith.

My father-in-law, Jim, was born with Type-1 Diabetes and throughout the first several decades of his life, doctors did not forecast much of a future for him beyond say, age 50.  His diabetes forced him to give up working the family farm he loved, and in talking to his daughter, my wife, there has always been a sense that he was living on “borrowed time.”

This newest novel of mine, Little Faith, is more or less anchored by a character named Lyle Hovde, who bears more than a few similarities to my father-in-law.  Lyle is a character I’ve been working on since I began writing fiction more than a decade ago (see my short story “Apples”, originally published in Ploughshares back in 2011 and later included in my short story collection, Beneath the Bonfire,) and the character was really born out of a sense of wanting to preserve Jim, of wanting his spirit, his visage, and my memories of him, to live forever.  This, I believe, is one of the most pure reasons to write a book, fiction or otherwise – this practice of remembering those we love, of honoring them; in some ways, of reincarnating them.  Books, I have come to believe, are a reason to believe in God, or something like god – certainly a reason to believe in magic.

Part of the reason why my wife and I choose to live in the same community where we grew up is that we believe very passionately in the bond between grandparents and grandchildren.  It is a unique human relationship; very young people and much older people.  I delight in watching Jim (and my wonderful mother-in-law, Lynn, and my own loving and charitable parents, Bette and Ray, of course) interact with our children.  But I’ve chosen to focus on the relationship between a grandfather and his grandson, because I often reflect on Jim and this notion of “borrowed time.”  I wonder how sweet his days must taste, those moments he pauses in, lingering and savoring.

The plot of this book sprang from true story that transpired in my part of the world, back in 2008.  An eleven-year old girl died of complications from diabetes, largely because her parents were praying for her recovery, rather than taking her to a hospital for rather straight-forward medical treatment that might have easily saved her life.  This story haunted me.  I began researching prayer-healing in America and was shocked, each night, as I lay in bed, reading story after story of children dying in cruel and largely preventable circumstances while their parents huddled over their little bodies, doing – some might say – nothing.

Then I began thinking about Lyle, and wondering what he would do.  What he would do to protect his own grandchild from a parent that was his own kin.

At the same time, and really my entire life, I’ve been struggling with own faith.  I’ve never believed in God, though I think I’ve made myself receptive, open… but my brain always overpowers my heart, and I… I just can’t, I don’t believe.  And neither does Lyle.  But good fiction, good books aren’t about an answer – that’s what mathematicians and accountants are for.  For me, good books are about the struggle, the journey, the mystery, and that is the dark-land through which Lyle wanders, shining his own light as he tries his best to tread lightly and make his world a better place to live.