An interview with S.M. Hulse about "Eden Mine"

We talk with S. M. Hulse about the American West, faith, violence and empathy, what she's reading now, and so much more.

This is familiar territory for S.M. Hulse: we named her debut Black River a Best Book of the Month when it published in 2015, and her new novel, Eden Mine, is one of our Best Books of February. We also had the opportunity to interview her for her last book and I’m thrilled to say here we are again. There's a reason for it: she is a master storyteller and terrific writer. Her books are propulsive, understated, and breath-taking. The characters she draws, the landscapes she presents, the complicated themes she tackles head on—modestly, brilliantly—are searing.

In Eden Mine, Hulse tells the story of a crumbling mining town in the west and an unspeakable act of violence that forever alters lives, communities, and Jo Faber—one of the strongest female protagonists I've met in awhile. In our interview we talked about the West, violence, empathy, what Hulse is reading now, and much more.

Al Woodworth, Amazon Book Review: Eden Mine feels familiar to your debut, Black River—the unforgiving west, characters who are down and out and whose experience with violence will forever alter their lives, relationships. What draws you to these themes?

S.M. Hulse: I appreciate how timeless these themes are, and I enjoy exploring the ways in which the stories that have been told about the American West in the past impact the people living in the contemporary West and the stories we tell about them today. I also often incorporate religious or biblical themes into my work, and these kinds of big events, flawed characters, and sweeping landscapes feel like they are capable of supporting those heavy thematic elements.

In Eden Mine, you expose and examine how a person could commit an act of domestic terrorism. Can you share what it was like to write about such an alarming act; what inspired you?

I’ve always been interested in writing about big events; my first novel, Black River, involved a prison riot, and most of my short fiction also includes similarly large-scale events. However, what I find most compelling are not the events themselves, but the ways in which those events impact people and communities over time. In Eden Mine, the courthouse bombing that sets the events of the novel into motion takes place off the page, and what interests me most in the book is how Jo, whose brother built and detonated the bomb, has to try to reconcile the person she loves with the terrible act he has committed.

I was on the edge of my seat the entire time reading your book—truly. I gasped aloud, my eyes pricked with the possibility of tears because in my reading of your novel, you realize how very complicated life is and even though people can do bad things—which are not justified—you can understand why. How do you get into the mindset of your characters?

Since most of the novel takes place from Jo’s point of view, I had to write from the perspective of a character who loves her brother and everything he has done for her over the years, but also understands that he has committed a serious crime that has had devastating effects on innocent people. Her struggle to reconcile those two realities—her love for Samuel and her horror at his actions—drive her arc throughout the novel. In writing the book, I thought not only about what might lead Samuel to commit an act of domestic terrorism, but also what might keep Jo from outright rejecting him when he does, and what unfolded was a complicated story of a young woman who has depended on her brother because he has always been there for her when no one else was, and of a man who has suffered a number of losses he cannot control and snaps when faced with yet another loss. I also had to think not only about the events of these characters’ lives but also the influences of the people and places around them, because I wanted this to be a novel very tied to its setting.

Jo makes a living by painting idealized landscapes of her surroundings that the occasional tourist buys – and as the pages go by she begins to paint a realistic version of her home that is actually made from dirt. Why do you think we idealize and/or stereotype “the West”? Is that why you like writing about it?

I’ve always been interested in why certain fiction is labeled “regional” and other fiction isn’t; why, for example, is a story set in Montana called “Western” and a story set in Mississippi is “Southern,” but a story set in Maryland isn’t necessarily labeled “Mid-Atlantic”? I think it has something to do with the ways in which the histories of the American West and South have been mythologized and sometimes romanticized, especially with regard to the periods of Western Expansion and the Antebellum South. It’s also interesting to consider how those stories and mythologies developed; for example, why did cowboy stories set in the mid- to late-nineteenth century become so popular in the mid-twentieth century, and what can that tell us about those telling and consuming those stories? I’m especially interested in the ways in which these mythologies and stories shape those who live in these regions today. For example, I’m fascinated by the degree to which stereotypes about what it means to be a “Westerner” impact those who grow up in and inhabit the contemporary West; this played out in Eden Mine in a number of ways, from exploring how the independent “frontier mentality” might have helped lead Samuel toward extremist ideologies to how Sheriff Hawkins tries to cope with the sometimes-depressing realities of life in a dying small town by modeling himself on the kinds of lawmen who appear in Western genre fiction and film.

Where do you write?

At home, for the most part. I don’t have a dedicated writing space, so I mostly work on my couch—usually with my cat, Zephyr, lying on my laptop or manuscript! Sometimes I’ll work in the library at the University of Nevada, Reno, where I’m a professor. I try not to be too fussy about where I work so I can make use of what time I have when I have it.

Did you read any books in particular that helped you to write Eden Mine?

What do you like to read; what are you reading now?

I like to read all kinds of books. I don’t read a lot of contemporary literary fiction while I’m working on a book, but I recently enjoyed Michael Ondaatje’s Warlight and Ann Patchett’s Commonwealth. I often read and revisit classic literature for inspiration, and recently taught Mikhail Bulgakov’s The Master and Margarita to a couple of my creative writing classes. I’ve also been reading a lot of classic westerns lately; I really liked Zane Grey’s Wildfire and Louis L’Amour’s The Daybreakers. I love horses and have a huge collection of horse books. I just finished Elizabeth Letts’ The Perfect Horse, about efforts to save the Lipizzaner and Polish Arabians during World War II; I especially enjoyed it because it features Spanish Riding School director Alois Podhajsky, whose My Horses, My Teachers has long been one of my favorite horse books. 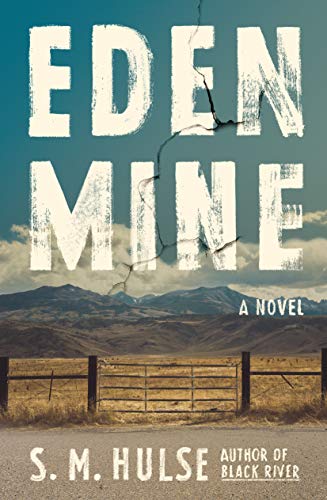 Books for those...
Read