Deborah Heiligman on "Vincent and Theo"

‘When I was first reading Vincent’s letters to Theo I just kept thinking, “Why did Theo put up with him?” And I asked one of my sons and he said, “Why? Because they were brothers.”’

Deborah Heiligman writes the crème de la crème of YA nonfiction—you may remember Charles and Emma: The Darwins’ Leap of Faith, a National Book Award finalist and Printz Honor recipient in 2010, or her picture book for younger children, The Boy Who Loved Math: The Improbable Life of Paul Erdos, illustrated by LeUyen Pham. For those young and adult readers who love her work, this week brings something special: the publication of Vincent and Theo: The Van Gogh Brothers. Vincent and Theo is not just about Vincent Van Gogh’s development as a painter. It’s a portrait of the often contentious but ultimately intimate and supportive relationship between Vincent and his brother Theo, an art dealer. Using letters between the brothers and a host of other primary sources, Heiligman explores the dynamic of these two siblings, who loved each other as fiercely as they quarreled. Here she talks to the Amazon Book Review about what attracted her to the Van Goghs.

Amazon Book Review: Deborah, tell me about how you came to write about Vincent and Theo.

Deborah Heiligman: In 2011, I made a trip to Europe with my husband [the writer Jonathan Weiner]. He had a book out and was going on a book tour to Ghent, Belgium, and Bulgaria. We had a lot of free time so of course we went to the Van Gogh museum.

There in the museum I saw a little plaque next to a painting, and it said that Vincent had a brother named Theo, who supported him. I was just walloped by that. I barely remembered that he had a brother. It went on just enough to make me realize that I had to write about their relationship.

At that time, I was working on a book about the first female homicide detective in New York. It just wasn’t working. I couldn’t get enough of a story and I just couldn’t write it. My editor Laura Godwin (who now has an imprint at Henry Holt, Godwin Books) knew before I did that it wasn’t working, but she let me figure that out. I went to speak to her and told her that I had only one other topic that was calling me, which was Vincent and Theo. I started talking about it and she went to a pile of books in her office. She picked up a fictionalized version of their story that she had bought from the gift shop at the Van Gogh museum. She handed it to me and said “When I saw this, I thought, someone has to write a longer version of this.”

You book about Charles and Emma Darwin was very much about a partnership, and Vincent and Theo is, too, in a different way. Is there something about partnerships that calls to you as a writer? 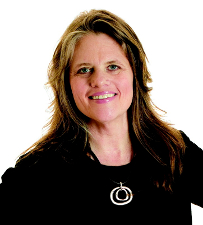 I’m always fascinated by intimate relationships. It’s probably the thing that’s most important to me in my life. When I wrote Charles and Emma, it was a love letter to my husband. He had written a book about Darwin and we discovered that Emma was religious. I had majored in religious studies and my husband was a science writer. As we say in the Jewish world, it was meant to be.

One reason I was so drawn to Vincent and Theo was that when I was a child I desperately wanted a sibling close in age. Then I had two boys who are three years apart and I got a front-row seat to that really interesting relationship between siblings that I didn’t get.

When I was first reading Vincent’s letters to Theo, I just kept thinking, “Why did Theo put up with him?” And I asked one my sons and he said, “Why? Because they were brothers.”

Both Vincent and Theo suffered from mental health issues. There was so little understanding of mental illness in their day. What conclusions did you come to about their conditions?

Yes, the mental health perspective on mental illness probably is very different today. Now we look back and we see someone with, arguably, bipolar illness. I don’t think that gets in the way. I think it helps frame it.

The reason I like working with primary sources is that I like to meet them on their own.

I had the great good fortune of having so many letters between the characters. I think Vincent was probably bipolar and he probably had seasonal affective disorder. In terms of secondary sources, everybody has a thought about it. Kay Redfield Jamison believes he was bipolar. But if I don’t know, I don’t know. I try not to look through anybody else’s lens.

How do you view Van Gogh’s parents, who hoped he would choose a more conventional career path?

I think they were just doing their best by Vincent and he was probably not an easy child to raise. They were probably totally fine parents. The dad really did appreciate Vincent’s talent. His mother could have been more supportive. They never gave up on him. I’m sure the mental illness that several of the children had was chemical.

Vincent’s painting of two young men next to a windmill [The ‘Laakmolen’ near The Hague] is thematically very important to your book. Tell me little bit about that painting.

As I was reading the letters and researching, the story of the two brothers walking together to the windmill and making a pledge to each other kept coming up. The letters never said exactly what the pledge was, so one day I was trying to find a photo of the windmill—I wanted to see exactly where they walked. I was online and working with a Dutch friend who was translating for me. So I’m online and I’m looking at pictures of the windmill. This painting comes up on Wikimedia Commons, and I said, “What! He painted that windmill! When did he paint it?” It said he painted it in 1882. That was a time when Vincent was so upset because people were mad at him: his cousin, his uncle. He was so sure Theo was going to go to stop supporting him. So he painted it right then, and I thought, “Oh, my God, this is the painting of their relationship.” No one else had said that.

Which is your favorite painting by Vincent?

My favorite has to be the one of the brothers at the windmill. But I also love Almond Blossoms, the painting he gave to Theo to hang in Theo’s baby’s bedroom.

How difficult was it for you to structure this book? 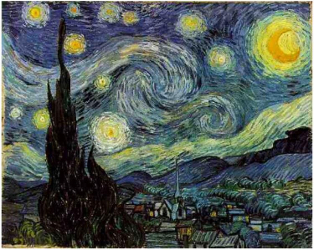 I basically wanted it to be chronological but I didn’t want to start with the childhood. I wanted to start with Vincent and Theo living together as adults, when they’re fighting. Everyone can relate to them. I used the “tent pole” structure: you start in the middle and then go forward and then go back and then catch up and keep going chronologically.

The other part of the structure was the idea of writing it like a gallery. I got that idea from listening to the children’s book illustrator David Wiesner giving a lecture at a writers’ retreat. I was hanging on his every word. I thought, “Oh, my God, I want to write this like paintings. Like walking through a museum show.” I had to be restrained. The question was how to do it without overdoing it.

What do you learn in the course of writing the book? Were there any surprises?

I actually learned a lot from writing this book. I learned more what it is to be an artist from Vincent and also how to be a writer. Vincent had so many beautiful things to say about creating. There were many times when his own words and his own perseverance and bravery kept me going. I think from his example—taking chances and pushing himself—I learned that I wanted to do that. This book took a lot out of me and I’m so glad that I pushed myself. He was so inspiring. 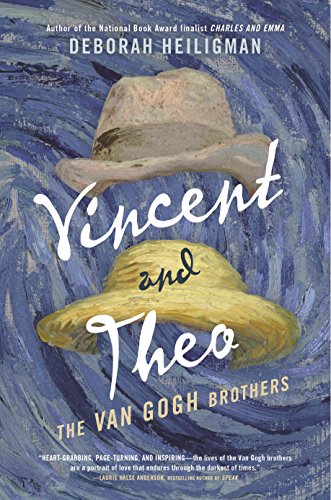