Rumors of Tears: An Interview with Nicholas Sparks 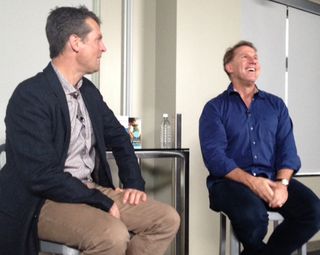 If Stephen King is the King of Horror, Nicholas Sparks is, well, the King of Love. There’s no mystery to it, Sparks insists: “I just put people on dates and let them fall in love.”

Across seventeen novels, nine of them adapted for film, that boy-meets-girl formula, which he's explored every angle, has worked amazingly well for Sparks. He’s become one of the world’s best selling and most beloved authors, and he hasn’t slowed down a bit. The film adaptation of his novel The Best of Me opens Friday, and a screen version of The Longest Ride is coming next year.

“What I’m most proud of in my own career is: I never got lazy,” Sparks said during our interview earlier this summer at Amazon’s Seattle campus.

He’s also never tired of writing about love, “the emotion that pretty much drives most of the goodness in the world." Though he tries to walk a line between drama and melodrama--"almost like threading a needle”--he acknowledges some critics think he crosses into mawkish sentimentality. His goal, learned from his hero, King, is to simply tell the best story he can, and let readers decide. And if he makes readers feel something? Then he's done his job.

“I’ve heard rumors that some people have actually shed tears over some of my novels,” he joked.

The interview is a long one--almost 45 minutes--but fans will enjoy hearing Sparks talk about his work habits, and how sales of The Notebook seem to spike whenever Ryan Gosling takes off his shirt.

>See all of Nicholas Sparks’ books