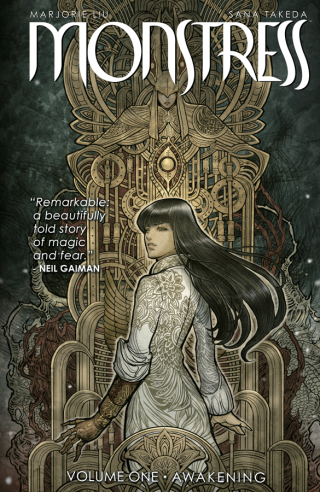 With all the in-fighting in comics this year (Batman vs Superman; Captain America: Civil War, etc.), our editors gave peace a chance and agreed on 20 of the Best Comics and Graphic Novels of 2016. From fiction to non-fiction, indie to superhero, these will not disappoint even the toughest turkey.

Atop the editors’ picks for best of the year is Monstress Vol. 1: Awakening by writer Marjorie Liu and artist Sana Takeda. This fantasy, set in a post-war world where humans hunt and enslave animal-hybrids known as Arcanics, is a mixture of steampunk, Lovecraftian creeps, and Final Fantasy character designs. Maika Halfwolf is the protagonist, an Arcanic on the run and seeking answers to her mother’s murder. What she finds is a group of crazy witch-nuns, a magical, two-tailed talking cat, and a terrible monster that threatens her sanity. Liu’s plot swiftly sprints across mysteries in Maika’s world, and while the answers are often murky, they are never dissatisfying. Sana Takeda’s manga-influenced artwork is filled with menacing ideas set against cute ones. Both creators bring rich visions to the book, and it’s a rare world worth exploring.

But 2016 wasn’t only about fantasy. Other selections include the poignant and painted Rolling Blackouts: Dispatches from Syria, Turkey, and Iraq by Sarah Glidden; the kid-friendly, first-ever English translation of Kitaro: The Birth of Kitaro by Shigeru Mizuki and Zack Davisson (translator); the civil rights spotlight March: Book 3 by Congressman John Lewis, Andrew Aydin, and Nate Powell (which won the 2016 National Book Award for Young People’s Literature); and the mammoth-sized The World of Edena, the first hardcover retrospective planned in a series for the late, influential, and visionary artist Moebius.

Never fear, true believer readers: there were outstanding superhero stories in 2016 as well. Black Panther Vol. 1: A Nation Under Our Feet by novelist Ta-Nehisi Coates and artist Brian Stelfreeze brought the Wakandan Avenger back to the forefront and into bestseller lists, while writer Paul Dini took a personal and non-fiction approach to the Caped Crusader in Dark Night: A True Batman Story with artist Eduardo Risso.

This Thanksgiving, there are plenty of comics to be thankful for in 2016—and there are plenty more in our Best Books of 2016 store. Feel free to let us know your favorites in the comments below!