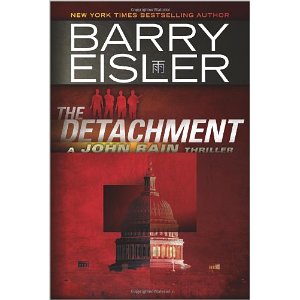 Bestselling authors J.A. Konrath and Blake Crouch are the co-writers of the thriller Stirred, available on Kindle November 22, 2011, and in paperback on February 21, 2012. We asked them to review Barry Eisler's latest thriller, The Detachment... and did they ever review it. Read on for one of the funniest guest reviews we've seen in a long time:

J.A. Konrath: I'm delighted to be the author asked to do a guest review of Barry Eisler's latest John Rain thriller, The Detachment. I really think this book--

Blake Crouch: Hold on. I thought I was the author asked to do a guest review.

J.A.: You were asked, too? Well, I'm pretty sure I was asked first.

Blake: I doubt that. You were probably the back-up in case I was too busy.

J.A.: I'm 100% positive you were the back-up, because I'm 100% sure I liked The Detachment more than you did. I think it's Eisler's best book, and I really liked the other eight, plus his Kindle short stories The Lost Coast and Paris Is A Bitch.

Blake: I agree The Detachment is his best, and that's not blowing smoke. I read this book on a 12-hour flight, after I'd already been up for 18 hours. Anything less than flat-out riveting and I would've instantly been asleep. It was like literary adrenaline.

J.A.: Well, I was invited to go to the White House to drink beer with Obama, but I said no because I was so engrossed in the story.

Blake: You were not invited to the White House.

J.A.: I was. And the President wanted to give me a medal. But I had to find out how The Detachment ended, so I was forced to decline. That's how much I liked the book.

Blake: A medal for what?

J.A.: It was the Presidential Medal of Liking The Detachment More Than You.

Blake: No way. I did actually like this book more than you. I read it in one sitting.

J.A.: You do everything in one sitting. You're too lazy to get up off the couch.

Blake: It was so good, I didn't breathe for eight straight hours. Three times, I had to be resuscitated.

J.A.: I read it so quickly that my eyeballs got whiplash.

Blake: What was your favorite scene?

Blake: I loved the scene where Dox, Rain, Larison, and Treven step onto the elevator and...

Blake: Rain would own him. Dox would back Rain up. Although I will grant you that Larison is definitely the scariest of these four.

Blake: You sure you weren't going to be given the Presidential Medal of Being Totally Wrong?

J.A.: Barry told me he doesn't make up the spy stuff he puts in his books. He takes a lot of it from real life. He used to be in the CIA, you know. And he's a black belt in judo. He can kill you 27 ways, using just his pinky toe.

Blake: I told Barry after I finished reading it, that he is the most terrifying writer I know. In our books, you and I write some pretty wicked villains that do horrendous things to people, but Barry actually knows how to do the stuff he writes. And you can tell by the way these four assassins--who've been brought together in this killing "dream team"--are constantly thinking four and five moves ahead. It's like a modern day Dirty Dozen. Minus eight.

J.A.: The spycraft is compelling. But so is the story, and the villain. Hort may be one of the best bad guys in contemporary fiction, because he truly thinks he's a patriot. The comparisons to current events are chilling...

Blake: This isn't much of a review so far. Do you think we should actually mention something interesting or important about the book?

J.A.: It's a fun, exciting, well-researched, speedy read. Lots of suspense, some great twists, and even a bit of humor. In fact, some of the dialog is laugh-out-loud funny. If you like thrillers, you need to pick this up. How's that?

Blake: I can do better. The Detachment is like watching four killers play chess. They're all grand masters, and you aren't sure right up until the end who is going to come out on top. Because it isn't just about whether or not they'll kill their target--it's if they'll kill each other in the process.

J.A.: It has a great ending. I want to say more, but don’t want to spoil anything.

Blake: No doubt. One of the most satisfying I've read in ages.

J.A.: And also, The Detachment cures the common cold.

J.A.: I had the sniffles when I started reading it. By the end, no more sniffles. Knocked the rhinovirus right out of me. This book ought to be bottled and sold in pharmacies.

Blake: Remind me again why I collaborate with you.

J.A.: Because I liked The Detachment more than you did.