Neal Bascomb and A.J. Baime write about much more than cars (but cars are cool) 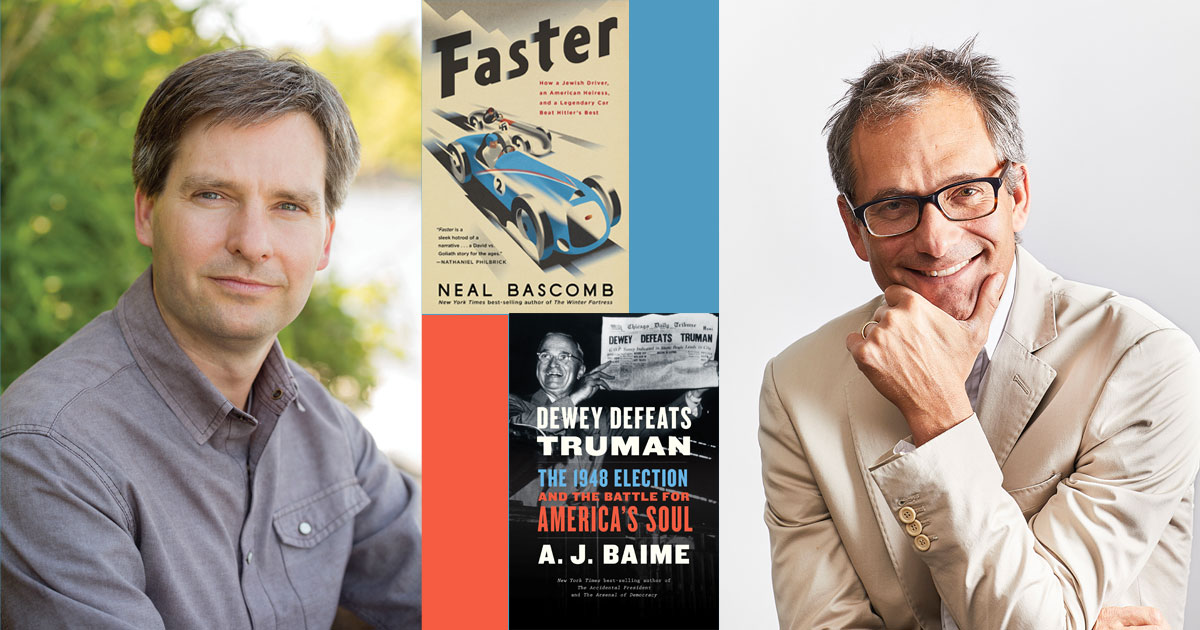 Editor's Note: Neal Bascomb and A.J. Baime are authors and friends, who have both written books about cars. Actually, from the answer to the first question posed below, you will see that I've slightly mis-stated what they do—their books are about much more than cars. Since we enjoy both these authors, we thought it would be interesting to line them up and see how they answer a Q&A together. It's a good way to learn about authors and their books, and a great way to see how they interact in their own natural environment.

A couple decades ago, Neal Bascomb and A. J. Baime first met around a poker table in Brooklyn. At the time, both were aspiring writers who were likely to get nowhere, and whoever took home enough winnings to finance a ramen noodle special that evening, neither will reveal. Now here Neal and A. J. are, together again, a dozen or more books between them, talking craft, story, and their two racing histories—Bascomb’s newly released Faster: How a Jewish Driver, an American Heiress, and a Legendary Car Beat Hitler’s Best and A. J.’s now classic Go Like Hell: Ford, Ferrari, and Their Battle for Speed and Glory at Le Mans.

Are these books about cars?

A. J. Baime: These books are actually about people who use cars the way fighter pilots use airplanes in books about WWII pilots, or the way baseball players use a bat and a ball in books about Babe Ruth or Lou Gehrig. The point of these books is that they are epic human stories. For a book to be gripping, we want readers to feel like they are in the protagonist’s shoes. So in this case, that means at the wheel of a car going 200 mph, with another car an inch away on one side and a concrete wall an inch away on the other, and millions of people watching.

Neal Bascomb: Perfectly said, A. J., as usual! I wasn’t much of a “car guy” before starting Faster. It was the individuals in my brink-of-war tale that fascinated from the get-go. You have driver René Dreyfus, the reluctant hero who, after a debilitating crash, had to rediscover his confidence, then take on the uncomfortable role of “divine avenger” against Hitler. Then there is Lucy Schell, struggling against the inherent sexism of motor racing. Not only did she become the first woman to own—and run—a Grand Prix team, but also she pitted herself against the Germans at the height of their motor sport supremacy. Even the “villains” of this narrative were rich and complicated. Rudi Caracciola, the Third Reich’s great champion, cared nothing for politics. But after losing his wife, racing was all that he had left, and if it meant taking on the role of Nazi standard bearer so he could compete, he accepted that compromise. The power of these stories are the people.

What defines an “epic” story?

Neal Bascomb: That may be in the eye of the beholder, but to me, it is one where individuals are pushed to their extremes. Now for a literary novelist, those extremes may all be interior. A guy or gal sits in a room, remembers their past decades living on a suburban street, and all the usual pulls and pushes of life (ambition, jealousy, boredom, betrayal, love) that drove them to that moment. When done right, this can be very powerful. With narrative history, the world A. J. and I inhabit—if I may . . . 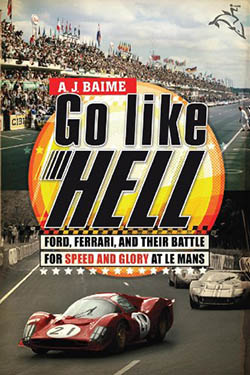 Neal Bascomb: In narrative history, these extremes are more often realized in high-stakes, life-and-death, action-oriented events. Insurmountable odds faced. Wars fought. Impossible barriers broken. In Faster, such was the import of what René and Lucy achieved that Hitler sent his men into France to erase any record (whether archival files or the cars themselves) of the devastating loss of his heralded Grand Prix team. Once I read that, I knew I had an “epic” story in my hands. The dazzling scene of the golden age of motorsport didn’t hurt either.

A. J. Baime: I would say that these are stories that transcend normal human experience. Heroes are often defined as ordinary people who find themselves in extraordinary situations. They often do not know they are riding massive waves of destiny until they are already on the surfboard, so to speak, hurtling into the unknown. For example, an over-the-hill mechanic who suddenly finds himself the number one race car driver on an American team in a historic campaign to defeat the best of Europe—as is the case with Ken Miles in Go Like Hell. Sadly, many epic stories, like Ken’s, see these protagonists die in the end. That is certainly the case in the example I just shared.

Neal Bascomb: Go Like Hell was definitely an inspiration for me writing Faster . . .

A. J. Baime: And Faster has been inspiring to me.

What was your most memorable moment in the research?

A. J. Baime: For me, I signed a book contract with my publisher before I had any idea if I could get one of my main characters, Carroll Shelby, to do an interview. I had all this material, but if he did not want to do an interview, I was screwed! I pursued him and got nowhere, for sleepless week after sleepless week. Then one day I went to a dinner where I knew he would be—the New York Auto Show—and I switched the place cards so I could sit at his table. We hit it off, and everything fell into place. We did many interviews that immeasurably helped to bring his character, and others, to life. I like that story because people can identify with it. No matter what line of work you might be in . . . whether you’re a chemist or a ballplayer or a stockbroker . . . you always hope that things will fall into place, and often, they do.

Neal Bascomb: My wife says I pick my books based on where I want to travel next. Not sure that is very kind, but with Faster, she’s not wrong. I walked—and drove around—some of the most famous and dramatic courses in the world. Monaco. The Nürburgring. Montlhéry. That said, a ride through the orange groves outside Oxnard, CA was the most memorable. It was in one of the four Delahaye 145s ever built, the type that René drove to victory. Ferrari said that racing is a “life of fearful joys,” but I didn’t quite understand what he meant until I drove the Delahaye. It was both terrifying and exhilarating. Everything in the world devolved into that ribbon of road ahead and thunder of its V12 engine. I can still feel it, and I hope I conveyed that same experience to readers.

Of your many books, what person did you most enjoy writing about?

Neal Bascomb: This is like picking your favorite child . . . which I’m more than happy to do. Unintentionally, most of my books are about the epic achievements of various men. In Faster, Lucy Schell carries much of the action—and it was a joy to establish her place in history. Wealthy beyond measure, she could have spent her life in idle. Instead, she served as a nurse in WWI, and then was a centerpiece of the “moveable feast” in Paris in the 1920s. After catching the racing bug, she became one of the pathbreaking speed queens and was the top-ranked American Monte Carlo driver of her time. She was brash, outspoken, fashionable, and tough as nails. Best of all, she leaps from the page with very little effort.

A. J. Baime: Every character in Go Like Hell is larger than life: Carroll Shelby, Lee Iacocca, Henry Ford II, Enzo Ferrari, Ken Miles, and a rookie named Mario Andretti. But I am about to come out with my second book on Harry Truman, called Dewey Defeats Truman: The 1948 Election and the Battle for America’s Soul. Truman’s life is so amazing, a fiction writer could never imagine it because the story would be too impossible to believe. But in fact, it is real. Truman was at the center of some of the most epic stories in human history. And today, when our electorate is so shockingly fractured, everyone—right, left, center—everyone seems to love Truman.

What do you drive?

A. J. Baime: Just bought a new Subaru Crosstrek—got a crazy deal on it. Do I love it? Yes! Is it sexy? About as sexy as a pair of mom jeans.

Neal Bascomb: Not as sexy as my baby blue Subaru Outback. My wife, two teenagers, Portuguese Water Dog, and I just took it on a cross-country move from Seattle back to the East Coast. It was more Griswold adventure than Cannonball Run, but that said, I love to drive the open road.

A. J. Baime: This has been fun, Neal. When are we playing poker again?

Neal Bascomb: Double or nothing?

A. J. Baime: That’s what got you in trouble last time!