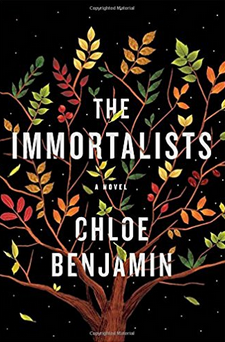 In our Spotlight Pick for this month, The Immortalists, four siblings visit a psychic renown for being able to foretell the day anyone will die. Is this knowledge a blessing, or a curse? Chloe Benjamin takes what could be a hokey premise and instead pens a provocative and deeply moving tale. Editorial Director Sarah Harrison Smith says that Benjamin, who is "only 28 years old...sets a high standard for realistic fiction in 2018 – and it’s only January."

Learn more about today's best books of the month releases below, or browse all of our favorites for January here.

The Road Not Taken by Max Boot

How’s this for a thought*: America loves war. We know we shouldn’t, but it’s a compulsion. We manage the dissonance through the words we use to justify it. Sometimes we “stumble” into conflict, other times we’re “lured.” Once we’re there, the “quagmire” traps us, sucking at our boots along with millions, billions, and trillions of dollars, and thousands of lives. We’ve seen versions of this is Afghanistan and Iraq, but the template is Vietnam. Max Boot’s biography of CIA operative Edward Lansdale shows us that it didn’t necessarily have to turn out this way. Lansdale, AKA “the T.E. Lawrence of Asia,” had favored a “hearts and minds” approach in adversarial political landscapes, eschewing pure militarism as a panacea in global policy by introducing social and economic strategies to the mix. He’d experienced success with his philosophy in the Philippines, but in Vietnam, the deck—in the form of powerful generals and diplomats—was stacked against him; America doubled down on bombs and napalm, shoving Lansdale and his ideas to the margins. The Road Not Taken recalibrates the argument, and its strengths are (at least) three-fold: Boot’s research is deep and seemingly impeccable; the material is complex and dense, but it reads like a novel; and maybe most importantly, Boot—no liberal himself--refuses to bind himself with ideological constraints, opening nuanced pathways for reassessing this difficult history, especially in the context of current and looming conflcts. The only question: Is anybody listening? * h/t @adamjohnsonNYC --Jon Foro

The Widows of Malabar Hill by Sujata Massey

Set in 1920s Bombay, The Widows of a Malabar Hill introduces Perveen Mistry, Bombay’s first female solicitor, who works for her father’s law firm, handling contracts and estate work. When one of her father’s Muslim clients dies and the trustee of the estate submits paperwork, signed by his three widows, donating the bulk of their inheritance to charity, Perveen’s suspicions are aroused. The widows live in purdah, totally cut off from the outside world, and as she delves deeper into the secrets and betrayals in the house on Malabar Hill, what started as a routine inquiry quickly escalates to murder. Perveen has painful experience of the ways in which women’s voices can be silenced, and driven by personal tragedy to protect the rights of such women, even murder can’t deter her. Massey deftly evokes the sights, the sounds, and the heat of Bombay as her clever and determined heroine, aided by a large supporting cast of sharply-drawn characters, sidesteps both custom and danger to deliver justice. --Vannessa Cronin

When by Daniel H. Pink

How many of us come back from a lunch break with the best of intentions for an industrious end to the day, only to suffer the dreaded post-lunch slump? Pink lays out the scientific case for this phenomena, a peak, trough, and then recovery of energy levels and productivity seen in people worldwide, across all cultures and geographies. By being aware of one’s own chronotype, i.e. when they tend to experience peak and diminished performance, (for the record, I’m writing this review right before lunch), Pink argues readers can be more effective in choosing when to tackle a new project at work, when to give a big presentation, or even when to schedule a surgery. --Matt Fyffe