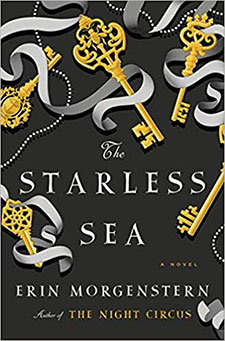 Erin Morgenstern bowled us over with her debut novel, The Night Circus, eight long years ago and we've been waiting for her next book ever since.  The Starless Sea is a book that was worth the wait.  In fact, Morgenstern’s enchanted touch with words and imagery, so vivid it’s impossible not to picture even the most delicate of details, is as exquisite as ever. The Starless Sea is a love letter to books and readers, a masterpiece of stories within a story where fables of pirates and princesses converge with the saga of Zachary Ezra Rawlins, the son of a fortune teller. A series of unusual events leads Rawlins to a secret repository of books and fairy tales, a place that contains worlds within time and somewhere a starless sea. Rawlins falls in love first with a book and later a person, both of which compel him to embark on a dangerous journey through lost loves, and lives lived again and again.  The novel reveals increasing layers of complexity as fiction and reality start to blend, and characters collide in surprising ways. This is a book that will quite possibly--as it did for me--enter your dreams.  We chose The Starless Sea as No. 5 in our list of the best books of 2019, you can see the full top 20 picks, and more, here.

Morgenstern recently paid a visit to Seattle for an event at Amazon and readers here were thrilled.  Here's a sample of our conversation and you can watch the whole thing in the video below.

Seira Wilson:  So, Erin, you write your first book, it gets published, then it just blows up...

Erin Morgenstern: And then everything everyone ever told me doesn't happen to a debut author, happened to me. And I was kind of ill-prepared...

Erin Morgenstern: It was weird. It's still weird. I think I was so focused on trying the write the story the way I wanted to tell the story, and I didn't have much past that in my head. I thought it was going to be a weird book that maybe a few weird people would like...and I underestimated the number of weird people who very much responded to The Night Circus in ways I don't think I could have ever imagined.

SW: One of the things about The Starless Sea that I found so incredible was how you wove the stories together, and in unexpected places, did you know as you went along how it was all going to fit together?

EM: No. Not at all. It kind of looks like I knew what I was doing doesn't it?  I think it came from working and re-working, and re-writing. I re-wrote the book a lot. I probably re-wrote the back half from scratch at least three times.  I changed things, and I tweaked things, and took things out, and layered thigns back in.  And I think because I did all that work, removing things and changing and adjusting things that I kind of finessed everything so much that I could go in and say, oh I could connect this part that's new to this part that's old and it looks like I planned it. But really I just looked at what I had and tried to really tie everything together as much as I could but first I had to have all those things there...so then I could find those connections and layer those story elements in, to something that I'm really glad it looks like a coherent whole at the end of it, because it was word soup for a very long time...