Moonshine, and an Interview, with John Grisham

The first time I met John Grisham was eight years ago in a bookstore in Charlottesville, Virginia, his home town. I was there to give a reading from my second book, and Grisham was in a back room signing stacks of copies of The Innocent Man. The store owner (I think it was New Dominion) kindly brought me into the back room to meet the man--he was signing more copies that day than my book probably sold in its lifetime--and he graciously spent time asking about my book (the story of southern moonshiners and the birth of NASCAR) and eagerly shared a swig from the jar of moonshine I'd brought along for the reading.

So, is there a connection between that day in Virginia, and his new book, Gray Mountain, also set in Virginia, about a city lawyer battling Big Coal?

Nope. None whatsoever. I just never get tired of telling people I sipped moonshine at a bookstore with John Grisham. (See below. No, that's not a wig.)

Earlier this year, I spoke with Grisham (at Book Expo America, in New York) about not only his then-unnamed twenty-seventh novel, Gray Mountain (which went on sale last week) but about his first book, A Time to Kill, and his decision to revisit those characters 25 years later, in 2013's bestselling Sycamore Row. "It was really enjoyable going back to that locale, with those people," he told me.

> See all of John Grisham's books 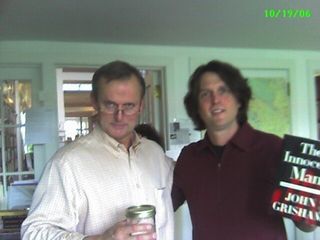 The World of Ice and...
Read