All this wintry weather has at least one positive aspect: It's the best excuse to curl up with a book, or two, or three….

These are a few of the books that we're hauling home this weekend. From secret spaces underground to voyages to the moon, and from insights into both psychotherapy and catering (they are both messy, messy endeavors), we're expecting that these books will make the weekend a reading paradise.

Oh, there's no question. I really should. But I’ve got Lori Gottlieb's latest providing me good counsel in the meantime. Maybe You Should Talk to Someone is an entertaining, relatable, and moving homage to therapy—and being human. This is something the celebrated psychotherapist feels especially acutely when she finds herself on the other side of the couch, expounding on the same fears, anxieties and profound grief that her patients share with her (however reluctantly). We’re all in this together, folks—something this book hits home. I’m feeling better already. —Erin Kodicek

Lately I’ve got a case of Moon Fever, a condition brought on by the recent SUPER BLOOD WOLF MOON eclipse and this year's 50th anniversary of the Apollo landings. The only cure is full immersion and, fortunately for me and my crisis, publishing has also caught the bug. Two that I’m looking forward to (among many, new and old, some of which I listed here) are James Donovan’s Shoot for the Moon (March 12) and Douglas Brinkley’s American Moonshot (April 2). Donovan’s book promises to be a behind-the-scenes, blow-by-blow account of the Space Race from Sputnik to Apollo 11’s triumph, while Brinkley (the author of two excellent biographies of Roosevelts Teddy and Franklin) examines the program through the context of the political and cultural upheavals of the 1960s. Together that’s more than a thousand pages of lunar lit. I choose to do it not because it is easy, but because it is hard. —Jon Foro

Spring can't get here soon enough and to hurry it along I'm reading a book coming out in April that I've been looking forward to. It's called Hotbox, written by brothers Matt and Ted Lee (cookbook authors and food writers who have won a total of six James Beard and IACP awards). I love insider stories, especially when the subject is restaurants, chefs, and the world of professional food service. There are many books tackling restaurant kitchens and the personalities that run them, but in Hotbox the Lee brothers take readers inside a familiar establishment of food that has yet to be fully explored: catering. I'm about halfway through and really enjoying myself—it's a crazy, fascinating, unique enterprise that had its start back in the 1960s. I will never look at the plates put before me at an awards dinner or wedding reception the same way again.— Seira Wilson 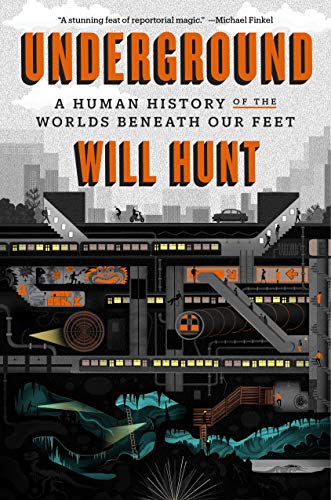 I'm partway through Underground, and every day I look forward to the few more minutes I can spend with Will Hunt and his stories of not just the underground places he explores but the fascinating slices of human history and natural history that lurk in these locales. From an ocher cave in Australia that's profoundly significant to local Aboriginals to the murky catacombs of Paris, Hunt shines a light into dark spaces, and I can't wait to see where else he explores. —Adrian Liang

Hearts and Hugs for...
Read