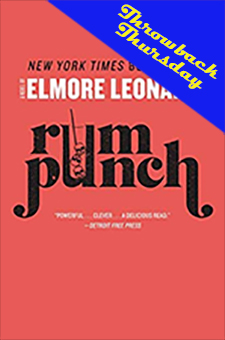 #ThrowbackThursday and #FlashbackFriday are some of the most popular hashtags on Facebook and Instagram, pasted alongside old photos you hoped would never again see the light of day. And while the groans and the mocking can be fun, we decided to do our own kinder, gentler, flashback moment with books.

What was big this time last year?  Five years ago?  Where are these authors and books now?  Below are three notable titles that released in January 2014.  It turns out that was a really good month though we might not have realized just how good at the time...

This was our first look at Pierce Brown.  A debut novel that looked promising, billed as a Hunger-Games-meets-Repo-Man dystopian novel written for adults.  SO. GOOD.  We picked Red Rising first as a Best Book of the Month and later a Best Book of the Year in 2014. Five years later, I still recommend Red Rising as a fantastic sci-fi/dystopian series to start, and the fifth book in the Red Rising saga, titled Dark Age, will publish on July 9th.  Lots of new release enthusiasm put Red Rising onto the Universal Studios radar, and back in 2014 it seemed certain that a movie adaptation would be fast tracked.  Not sure what happened there but the big screen film seems to be scrapped and now the talk is a TV series, put out on a streaming platform.  Maybe Amazon Studios will make it.  Are you listening, Amazon Studios? Great book...

The Invention of Wings by Sue Monk Kidd

Sue Monk Kidd's first novel, The Secret Life of Bees, soared to the top of bestseller lists and Kidd became someone to watch. More than a decade later, in January 2014, Kidd released her second novel: The Invention of Wings. Simultaneous with it's release into the wide world, The Invention of Wings was also an Oprah's Book Club 2.0 selection--Oprah having decided the book was a winner even before she got to the end. Maybe the selection helped the book, maybe not, but either way the book was an instant bestseller.  Where is Sue Monk Kidd now?  Word is that Kidd is working on her fourth novel, a story set in biblical times, about a wife of Jesus. No release date information is available, but fingers crossed we won't have to wait too much longer to learn more.

Leaders Eat Last: Why Some Teams Pull Together and Others Don't by Simon Sinek

This was THE buzzword business book around the office in 2014, and since Sinek published it in January, we had many months to deconstruct his wisdom, or hear it being deconstructed in the next cubicle over.  Sinek's real-life examples of workplaces that foster a sense of safety and trust--and those who don't--are just as relevant today as they were five years ago.  After the hardcover publication Sinek went on to expand the chapter on millenials for the paperback, after his video "Millenials in the Workplace" went viral with more than 150 million views.  Leaders Eat Last is a new classic in business books, and Sinek has been very busy since it's release, most recently finishing his new book, Infinite Game, scheduled to release on June 4th.