A Q&A with Shaun Morey, Author of "Wahoo Rhapsody"

Shaun Morey is the author of the bestselling Incredible Fishing Stories series and a contributor to Sun magazine. His first novel, Wahoo Rhapsody, goes on sale today. Read on to find out what inspired Shaun to write about drug smugglers, Baja, and, of course, fishing: 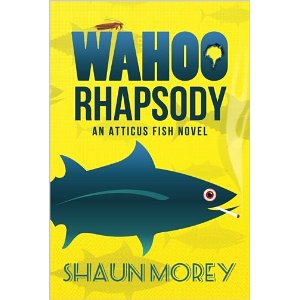 Question: Wahoo Rhapsody is one part international mystery, one part drug caper, and one part big fish story. What gave you the idea to mix the three?

Shaun Morey: A combination of a short attention span, a best-selling fishing book (Incredible Fishing Stories), and my discovery of pot floating in the Sea of Cortez. I blame tequila for the short attention span, dumb luck for the best-selling fishing book, and a combination of both for stumbling across kilos of lost dope. And because Baja California is mostly lawless it was ripe for a novel. Or jail. Or worse.

Question: You won the inaugural Abbey-Hill short story contest, and you're a three-time winner of the Los Angeles Times novel writing contest. Did these prizes push you to write Wahoo Rhapsody, or is it a story that's been in the back of your mind for years?

Shaun Morey: The wins were great fun, but a mystery series set in Baja had been marinating for years. Baja is like Florida without laws. A land of expatriates, rapscallions, outlaws, whackos, drunks, drunk whackos... It was easy to fit in.

Question: You've got to be a good storyteller to be a fisherman, don't you? But tell us honestly, what's the biggest fish you've ever caught?

Shaun Morey: Size isn't everything. My most memorable catch--other than the occasional floating kilo--was a Mahi Mahi that beached itself on a remote stretch of Baja coastline. I raced down the sand and bear hugged it. But fish are slimy for a reason. A wave washed over us and the fish slipped free. I came that close to making it into my own fishing book. Which would have been weird, so maybe it worked out best.

Question: There are some pretty quirky characters aboard the Wahoo Rhapsody, from Atticus Fish, the eccentric millionaire lawyer who sued God and won, to trouble-making first mate Weevil Ott. Are any of them influenced by real people or do they all exist only in your imagination?

Shaun Morey: All the characters are based on real people. The bars in Baja are filled with lovable and not so lovable oddballs, and you never know who you'll meet on the back roads. You learn quickly not to drive at night (drunks, wandering farm animals, drug dealers, bandits) and not to ask expatriates what they do for a living. As for my mistreatment of lawyers in the book, that was easy. I grew up around lawyers. And I have an uncle who really did sue God and win. Actually, it was the Catholic Church, on behalf of abuse victims. He made enough money to retire early. As for names, most are taken from people I've met over the years. And as a surfer I always wanted to name a character Skegs.

Question: You’re a fisherman, but fishing isn't your only passion. You've worked as a bar tender and attorney, among other things. Did those jobs influence the dead-on bar scenes and legalese in Wahoo Rhapsody?

Shaun Morey: The old saying "write what you know about" really rings true. The opening sting ray scene is based on an experience in Baja. I was camped on a beach when this drunken expatriate started spearing sting rays by the dozen. Supposedly, he wanted to make the water safer for his grandchildren who were coming in from the Midwest somewhere. It was as ridiculous as it was cruel and senseless. No one can kill every sting ray.

In Wahoo Rhapsody I try to satire the absurd. For instance, beheadings in Mexico are so commonplace that we risk becoming desensitized. So instead of beheading my deckhand, I have the bad guys use a hole punch on his face. Imagine replacing 30,000 dead drug war victims with 30,000 hole punch victims. That would be quite a lasting statement. Everyone would know what they'd done, including the cops.

Lawsuits are another area to poke fun at. More and more absurd cases are making the news. So, I invented Derek Moneymaker and his toothpick lawsuit. And of course, there's the lawsuit against God that made our hero Atticus Fish a billionaire and sent him fleeing south to escape the fanatics.

Question: What's next for your writing? Any other fish stories you're working on? More mysteries to come?

Shaun Morey: I'm halfway through the next Atticus Fish mystery-adventure and collecting stories for a second Incredible Fishing Stories book.