Jennifer Weiner on "Mrs. Everything" 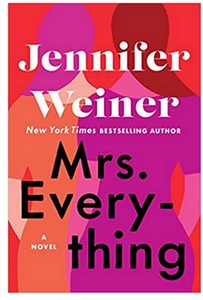 Spanning sixty-five years, Jo and Bethie Kaufman are sisters whose story begins in 1951. They’re polar opposites—Jo, the intrepid jock, has an eye for adventure (and, as it so happens, women), and Bethie is the girlie-girl whose aspirations skew more on the conventional side. When tragedy befalls one of them, dreams get deferred, threatening to irreparably change not only the course of their lives, but who they fundamentally are. Jennifer Weiner’s Mrs. Everything is sweeping in its personal and political scope, chronicling Jo’s and Bethie’s fumbling attempts to right their respective ships against the backdrop of an America experiencing its own growing pains. It’s a multi-layered and very moving story for the #MeToo era, one that traces how far women have come, and how far we have yet to go.

We recently caught up with the witty and whip-smart Ms. Weiner at BookExpo America, the largest annual book trade fair in the U.S., where we chatted about her mom, Herstory, and vagina forts (as you do). This interview has been edited and condensed for clarity.

Erin Kodicek: One of the main characters in Mrs. Everything is inspired by your mother…

Jennifer Weiner: Yes. My mom grew up in Detroit, went to the University of Michigan, got married to a man, had four kids and lived in the suburbs of Connecticut. In the 80s, my parents got divorced and 10 years later my youngest brother Joe was home from college doing his laundry and he calls me and says: “Jenny, there's a random woman living here and you need to find out what's going on!” After telling me it was her swim coach, I pointed out that it was not an Olympic year and then my mother blurted out: “The woman's name is Karen, she's the aquatics director at The JCC, and we fell in love and she's living here now. Bye!” We were blindsided. And so, when I wrote my first book, there was a character based on my mother, but it was a minor one that was there for comic relief. I always had this idea that at some point I would return to a version of my mother’s story because it was so interesting to me. It’s like, how do you go from one thing to another? And what is your life like if there's this part of you that you're hiding, or that you can't talk about? You can't be true to yourself--in a way. I also wanted to have another character who was sort of the good girl: the one who followed the rules, the one who did what she was supposed to. She ends up being traumatized in a way that will not be unfamiliar to lots of women, and I write about how that trauma impacts her life, shapes her decisions, knocks her off the rails for a while, and how she finds her way back.

Speaking of traumas, you do such a good job developing these characters that readers will get very attached to them; I got very attached to them, and given that Jo and Bethie are confronted by a series of unfortunate events, I couldn't help but think: Can you please just leave these women alone for a chapter?! What was the hardest part for you to write?

A little bit of a spoiler here, but Bethie, the good girl, is raped. She's taken drugs at a folk music festival and runs into these bad guys who take advantage of her, and she ends up pregnant and back at home. She’s a teenage girl, doesn't know what to do or who to turn to, and she eventually goes to her family pediatrician who diagnoses her with gonorrhea and then basically says, I can't help you; I can't help you with any other piece of this. It was especially difficult to write given what's going on in the world right now, given some of the laws that are being passed, given that there are women out there who find themselves in similar situations. Reproductive rights are endlessly under attack by men who I believe are not motivated by defenseless babies, but by a want to control and punish women for having the kind of sex that they don't approve of. That was a hard place to go.

That is one of the ways Mrs. Everything traces how far women have come since the 1950s, but also how far we have left to go. You seem to strike an optimistic tone by the novel’s end, but given what you just said, and given what is happening in places like Alabama and Louisiana and Ohio, do you feel like we're sliding back, or do you feel like women are still making steady progress?

One of the things that I learned when I researched Mrs. Everything is that progress is never a straight line. It's always up and down, two steps forward, one step back, or one step forward two steps back. It's always incremental. A lot of us thought we were going to have the first female president, we were going to live to see that, and now I'm looking at this field where it seems like every male politician with a “b” in his last name is now in the race and it's like, Is this ever going to happen for us? But I think that with my books, I always want to leave readers with the idea that things can get better. It’s going to take work but there is hope and the possibility that our daughters and sons can end up in a better place.

You always wanted to write a book that spans a character’s lifetime. Why was this the time to do that?

After the 2016 election, I wanted to write a book about reproductive rights. I wanted to write about a dystopian future where Roe has been overturned, abortion isn’t legal, there’s, like, this underground railroad…And I tried and I tried and I tried, and I just couldn't make it work. And so I thought, alright. I'm going to just go back. I'm going to write my mother’s story and maybe it won't be a big book, but it's a story that I care a lot about; and it wasn't until the end of it that I had to really interrogate my own bias and ask myself: Why was I thinking that just because it’s about two women it isn’t big? There are many important issues covered in this book: reproductive rights, gay rights--it talks about #MeToo. It wasn't the book that I set out to write, but it’s the book that I had to write at this moment in time and I hope it's going to find readers. I hope that readers are going to be moved by it, and entertained by it, and provoked by it.

Can we talk about the vagina fort for a minute, please? Is this a thing or a figment of your brilliant imagination? That scene provides some comic relief, but by the end of that chapter, Bethie does experience something profound…

Part of the book takes place at a commune and one of the things they do there is re-birthing, which was a thing in the 60s and 70s. It was this idea that if you were experiencing any kind of emotional blockage in your life--if you went back to your birth and did it better--that you would be freed from those emotional burdens. And so what I decided was going to happen in Bethie’s commune was that they were basically going to make her crawl through, as you so beautifully put it, a pillow fort vagina. She’s naked, they’re playing the sound of a heartbeat, one of the commune members wants to put Vaseline all over the floor to make it extra realistic…And Bethie is thinking this is the dumbest thing she’s ever heard of in her life. But by the end of it, there are all of these women who are holding her and telling her it's going to be okay. It ends up being a very moving thing, even though she probably has some splinters in places you really don’t want splinters.

You have a funny Amazon story…

I do. When my second novel, In Her Shoes, came out, it had this beautiful cover of two women in high-heeled shoes and you just see them from the ankles down--these beautiful shoes in pastel pink and Robin's egg blue--and I was so happy with the cover. It was gorgeous. And then a bookseller emails me out of the blue and says: “I just want you to know that your book cover is the same image as this other book called Best Fetish Erotica. So I look and, sure enough, it’s true. I'm aghast and I'm thinking, I hope people aren't confused...But the problem was that I had also just learned that I was pregnant. So I had searched for Best Fetish Erotica along with What to Expect When You're Expecting and this befuddled the Amazon algorithms. The next time I logged-on I had recommendations for fetish books, and how to eat healthy during your pregnancy...I thought, if the government is monitoring this I might be in some kind of trouble. They’ll say, no, you don’t get a kid! But, I still love you, Amazon.