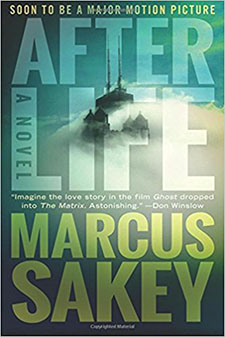 The question of human existence and its aftermath seems binary: Alive or dead? Heaven or Hell? Consciousness or nothingness? But what if it isn’t that simple? Author Marcus Sakey explores a radical idea of what comes next in his new thriller AFTERLIFE, selected by Amazon editors as one of the 10 best books of July.

With a sniper stalking Chicago, two FBI agents go on the hunt – and fall in love. But when their investigation expands to a world we can’t see called the Echo, the case really gets complicated. We spoke with Sakey -- also the author of the wildly popular Brilliance series -- about life, death and everything that follows.

You say AFTERLIFE was “a beast” to write. Please explain. I’ve had pieces of this book in my head for almost 10 years. It was such a balancing act to try to get the right tone, to get the rules right, without making it creak under the weight of its mythology. To make it a love story -- it’s really more than anything a love story -- while also trying to make it a modern myth. I rewrote the first 100 pages nine times.

Nooooo! Nine. Nine. Basically, it took me three books to write this one book.

Just to be fair to Brilliance fans, that series is truly over, right? At the moment, I have no intention to write a sequel to Brilliance. I will now immediately reverse myself and say that I do know what a next novel would be. I thought one up that I think is kind of neat. I’m not really planning to write it right now.

So it’s totally going to happen. It is absolutely totally happening or not happening. It is positively one of those two things.

Let’s get to AFTERLIFE. Who are Brody and Claire? Brody and Claire are FBI agents in a Chicago that’s under siege by a mysterious terrorist sniper, someone who is killing completely at random and for whom the terror is kind of the point. It was strongly influenced by the Beltway snipers in D.C. [in 2002.] People didn’t take their kids to school. They wouldn’t go shopping for groceries. They wouldn’t go to church. Gas stations were wrapped in these tarps. That sort of fascinated me. I thought it played really nicely into the larger questions that I wanted to explore.

How did you create Brody and Claire? Were they based on anyone in particular? Claire really was the one who came in focus first. I love strong women characters. It’s a partnership where she’s the one who’s a step ahead. That was something that I wanted to do. I knew that it was going to be an intense love affair. I knew that Claire was his boss, and I really wanted that sense of the heat of a new thing, this intensity of them having just found each other. And this being the worst possible time to begin something that is already not, on the surface, a good idea.... So Claire really came into focus first. And once she did, I tried to write the guy that would be worthy of Claire.

It’s actually not much of a spoiler to say that Brody dies in the pursuit. That’s on the back cover of the jacket. Book’s called AFTERLIFE.

But it’s where he goes that’s fascinating—a place called the Echo. One of the characters says “Don’t try to lawyer the afterlife,” as in, don’t get caught up in all the rules of the Echo. But dude, there are a lot of rules! [Laughs.] That might explain why it took me nine tries to get there. Y’know, it was a hard balance. I wanted to create a visceral afterlife that, under certain circumstances, you might land in. And yet I wanted it to have a feeling of being grounded, rooted in some level of science, or at least some sort of logical philosophy, rather than mysticism or religion.

What’s unique about this place? One of the central rules of the Echo is that it’s a dead world. Fire doesn’t burn, machines don’t work, cars don’t drive. But when people land there, we contain a measure of energy, and we can take it from each other. By taking that, we grow stronger, literally physically, but also in our powers and in our connection to life.

This is all taking place in Chicago, where you’re from—or at least Chicago’s Echo. Obviously, you love your city, but it’s often held up as a symbol of what’s wrong with America. Do you think Chicago gets a bad rap? I think Chicago is a pretty good symbol for America period, in the good and bad. I think that there are some horrible things that happen in Chicago and that you can’t not acknowledge that. It was interesting in writing this because a lot of the issues with the Chicago Police Department, Black Lives Matter and (the Spike Lee movie) Chi-raq were all happening at the same time. I didn’t want to dwell too heavily in the grimness of that, but at the same time I felt like [there had to be] some reflection in the Echo. I tried to do that, to bring in some characters who had died violently and wrong and should have still been alive.

You’re dealing with a lot of loss in the book. Was that something particularly personal for you? No, I wasn’t reacting to a specific moment. The seed of this idea came out of a dream years ago. It was essentially a dream of something like the Echo. I was wandering around Chicago and everyone was gone. I wasn’t scared, but I sort of realized, in that dream way that you know things, that I was dead. Then I woke up and my wife of 20 years is sleeping next to me. I just had this notion of like, ‘Jesus, what if I were wandering the same place? What if I could come and visit the house, stand at the foot of the bed and not be able to touch her, interact with her, talk to her?’ And then the dream became very scary indeed.

And now your literal dream is being turned into a movie by no less than Ron Howard. Obviously, under any circumstances, we couldn’t be more happy to be with Ron Howard and Brian Grazer at Imagine [Entertainment]. But especially because they’ve got this huge experience in adapting weird, complicated books like A Beautiful Mind and the Dark Tower series. I am thrilled. I get to write the script. We’re aiming at a high mark. I look at films like The Matrix and Inception as role models. I have no idea if I can get anywhere close, but those are the kinds of stars I’m navigating by.

OK, the question I ask everyone: What was the last thing you bought on Amazon? [Laughs.] It’s so unexciting. I bought it this morning. It was a cleanser for my kitchen floor. I wish I had a really sexy answer!