Writer Steve Cavanagh, author of "Thirteen," on being a quitter 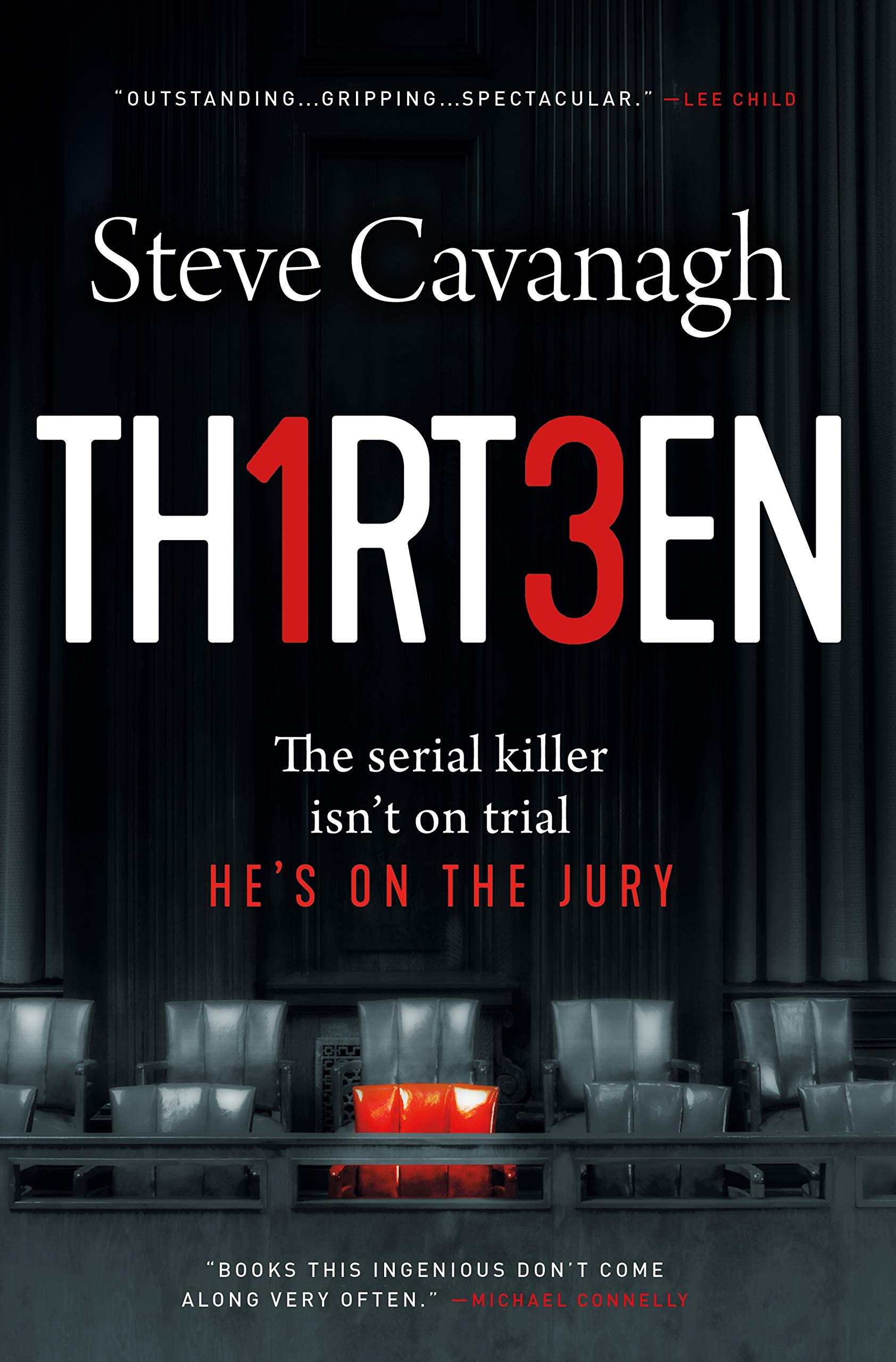 We frequently encounter books that feature blurbs from famous authors. They are ubiquitous to the point of becoming nearly invisible; you lose the trees for the forest. But when a group of famous authors gets together to support one book, it's worth sitting up and taking notice. Steve Cavanagh has been writing for a while, but Thirteen looks to be his breakthrough.

Here's the book description: It’s the murder trial of the century. And Joshua Kane has killed to get the best seat in the house – and to be sure the wrong man goes down for the crime. Because this time, the killer isn’t on trial. He’s on the jury. But there’s someone on his tail. Former-conman-turned-criminal-defense-attorney Eddie Flynn doesn’t believe that his movie-star client killed two people. He suspects that the real killer is closer than they think – but who would guess just how close?

Lee Child says of the author, "This guy is the real deal. Trust me."

Michael Connelly calls it “a dead bang BEAST of a book," adding: "Books this ingenious don’t come along very often.”

If you're wondering (as we did) who Steve Cavanagh is, and how he got to this point in his career, read the following essay he sent us describing his path to full-time author.

Most writers have a second job. Usually that second job is writing. It was my second job from 2011.

I came late to writing. This is at least partially true. From a young age I enjoyed telling stories. Books and reading were my thing. Nothing got under my skin, set my heart racing like a good book. From a young age the thought that one day I could write a book was nothing short of a pipe dream. I told myself I couldn’t do it. Books are four-hundred pages long. There’s no way I could write a story that long, and anyway, I wasn’t good enough.

This lack of self-belief is a symptom of the class system in Northern Ireland. I grew up in a rough, working-class area of Belfast that was mostly on fire for the best part of thirty years. My education consisted of one bad school after another. My career’s teacher believed it a personal triumph if his students (a) didn’t get killed by a paramilitary organization/the British Army (b) didn’t join a paramilitary organization (c) got a job shoveling shit in an abattoir. Anything above and beyond was golden.

I got decent grades, and through an education system that doesn’t exist anymore, I had a lot of my university education paid for by the state. I fell into a law degree (quite literally) and somehow managed to graduate but I had no desire to be a lawyer, nor any belief that I could be one. Still, it was an endless source of surprise to me that I’d managed to get through university. I thought that if I could do that, maybe I’d judged myself too harshly in the past. Maybe I could write. From the age of eighteen to twenty, I wrote a few screenplays. Movies were just as important to me as books, and I thought, rather foolishly, it might be easier to write a screenplay as it’s much shorter - only one-hundred pages long – not four-hundred. Yes, I was genuinely that naïve.

The first time you sit down to write something creative, as an adult, is scary. What if it’s no good? What if I embarrass myself? It’s not an easy thing by any means. Thankfully, I had some encouragement. My mum was the only person who ever encouraged me to write. She liked reading my stories when I was a kid, and when I told her I was going to try and write a screenplay she told me to go for it, and that I had nothing to lose.

One screenplay later, I had an agent in London. He wasn’t a good agent. I can’t even now remember his name, but he advertised in the Writer’s & Artists Yearbook that he represented screenwriters. On this basis alone I sent him my screenplay. He said he liked it and would send it out. Nine months later, I got an email from him telling me that Francis Ford Coppolla (or more likely, his reader) had read my script and rejected it on the grounds that it “wasn’t Irish enough.” I’m Irish, the screenplay was set in Ireland, and twenty years later I still have no clue what “not Irish enough,” means.

My first taste of rejection. All I was looking for was an excuse to quit – something that reinforced my opinion that I was no good at this.

I didn’t write anything after that. From the age of twenty to thirty-five – nothing. Not a single word of fiction. In those years I managed to get a job as a paralegal and eventually became a qualified lawyer. Practicing civil rights law, personal injury and criminal law I passed fifteen years with only the occasional thought of what might have been had I kept writing.

Then at the age of thirty-five, with a young family of my own, my mother died. It was a short illness. Less than six weeks from diagnosis to her passing away in a hospice. Looking back, I didn’t deal with my grief. I couldn’t face it. I was depressed too. Six months after she passed, I had a crazy idea. I would write a book. One that she would like. Her death felt wrong, like time had been stolen away, and I felt like I needed to do something positive. This was also a way for me to avoid dealing with my own grief – by hiding away in a fictional world.

I wrote the book. I got a new agent, and a new career to go with the day job.

That’s when things got tougher. Yes, having your first book published is a truly great feeling, but signing a contract that says you have to write a book a year, whilst exciting, is also quite daunting. I didn’t know how to write. I had a three-book contract to learn how to do it.

Writing and working a full-time job is very tough. I didn’t want to quit my job. I liked my job, and with two young kids it seemed too much of a gamble to quit. From 2014 to 2019 I wrote six novels. These were mostly written at night. I would wait until the kids went to bed, then sit down at my kitchen table around nine or ten o’clock and work for however long I could manage it. Sometimes I got three to four hours. Sometimes longer. My day started at six am, getting the kids up and ready for school. I took one of my kids to breakfast club, then went on to the office or court, wherever I was going to be that day. Normally I got home between six and seven. After some dinner, it’s not long before the kids go to bed, and I can snatch some time with my wife and then it’s back to the kitchen table with the day typically ending around one am. Five days a week.

Weekends I made up for the time I lost with the kids and my wife. I didn’t shut myself away during the day, I tried to keep the writing time separate so it didn’t interfere with family time. That wasn’t always possible though.

Then there’s promotional work – touring and book festivals. My family holidays were spent with me somewhere around the world, and my wife either at home or on a short break with the kids somewhere else.

The first three novels were critically acclaimed, and even won some major prizes, but never sold in sufficient numbers for me to think about making a change in career.

Then my fourth novel came out. Thirteen.

That book changed my life. The sales were there in the United Kingdom, and while I promoted the book I was writing the next one. The last two books were a struggle. I wasn’t sleeping, I was tired all the time, I was away so much my wife and kids would struggle to pick me out of a line-up.

Something had to change. I had to quit. The law, or writing.

I couldn’t do both anymore. Where before I could write for three to four hours every night, I was now only able to last a half-hour at the kitchen table – at best. I felt ill. My kids were growing up around me, and I wasn’t there for them.

My wife made the decision for me. I had to quit the law, and together both of us would see where the writing life took us. We have a little money behind us. The bailiffs are a long way away.

I might be crazy. But I think I can make a living out of this, and one where I have a fuller family life. The decision to go full time as a writer is a very personal one. Some people reading this article will be wrestling with the very same problem. You have only your wits and imagination with which to put food on the table. That’s pressure. You have to make the decision that’s right for you and yours. There’s no security net for me. It’s all or nothing, but I have family behind me whether we rise or fall.