In Hotbox, Matt Lee and Ted Lee, established food writers and cookbook authors, take readers behind the pipe and drape and into the fast-paced world of New York catering. The Lees became catering insiders, learning the finely choreographed dance between chefs, kitchen staff, rental supply companies, and the demands of the client, that go into every event. An incredibly entertaining read, the things I learned in Hotbox will go with me to every catered event I attend in the future.

If you enjoyed Kitchen Confidential, Cork Dork, or any other insider stories of the food world, I think you'll love Hotbox. We asked the Lee brothers to give Amazon Book Review readers a little tour of their book--you can read their exclusive piece, followed by a few behind-the-scenes photographs, below.

*Hotbox is an editors pick for the best books of April in cooking, food, and wine.

For those of you who know us as cookbook authors, you may be wondering: Catering? Isn’t that like rubber chicken? Sad buffets? (And for those of you who have worked in catering, who bear the scars: we see you. This is your story.)

We once looked askance at events food, too. And then one night changed everything. A restaurant chef friend from Atlanta, Steven Satterfield, was cooking a very special dinner at the James Beard House—a 75-seat venue in a townhouse in Greenwich Village—and invited us to observe. He’d hired three catering chefs from a top New York firm to assist him, and these chefs were—in every respect—flying blind: they’d never set foot in the famously cramped Beard House Kitchen before that night. They had never cooked with Steven, had never cooked the dishes they were about to prepare. They arrived at 5PM. The meal began at 7. And you know what? They knocked it out of the park! Lightning-quick. Agile. And talk about resourceful? They ran out of griddle space to sear the rabbit course, so they made their own griddles—upending aluminum sheetpans onto blazing-hot burners. Their techniques and strategies, equipment and even their vocabulary were unlike anything we’d seen in a restaurant kitchen.

In the afterglow of the success, we marveled—Amazing Job, Guys!—but they were having none of it: That was only seventy-five guests, they said. We don’t start sweating til the guest-count is 750.
But what about that terrible kitchen? we asked.

They said: Hey, at least we didn’t have to build it ourselves. Every night we’re a MASH unit; we show up at 3:30pm with not just the food, but the kitchen, too, and set up wherever we can: the loading dock if it’s MOMA. A hallway in the basement of the New York Public Library. An out-of-service freight elevator at some fancy apartment building. It’s a different site every night, a different crew, a different menu, and there’s never running water, or electricity, or HVAC. But one thing remains the same: at a catered function, the kitchen has to serve everyone more-or-less SIMULTANEOUSLY!

A new food world had opened up to us that night and we couldn’t resist stepping into it. Literally.
While reporting and writing HOTBOX, we embedded as kitchen assistants and party chefs for a top catering firm in New York City. Our book is about moveable feasts nationwide, but New York is perhaps the perfect lab for studying the culture of catering because it combines the highest of expectations and the most wretched of circumstances. When your average event in New York costs the host $1000 per person, rubber chicken won’t fly; the audience here is well educated about food and demanding. The stakes aren’t quite the MASH surgeon’s, but there is a lot of emotional and reputational risk when the parties you work are charity galas, weddings, movie premieres, product launches—it’s people, institutions and brands celebrating the most momentous nights of their lives. Think about it: at a restaurant, if there’s a truly epic fail on table 32 that can’t be solved, the house might lose a few customers. At a wedding for 450, when your Hotbox sets off the sprinkler system, or the dessert table collapses to the floor, tossing the chocolate budinos into the grass, that’s a rather more impactful outcome. The invisibilty of caterers, of catering itself, exists in a kind of masochistic tension with the celebratory factor, the specialness, of the events being catered, and with the potential for spectacular failure that hangs over the whole enterprise.

So, What IS a Hotbox? You’re asking. That’s the name for the tall, aluminum cabinet on wheels that serves as both transport vehicle for food and—once it’s onsite and loaded with a few flaming cans of sterno—it becomes the oven; after the party, it becomes the refuse wagon. That Sterno-fuelled HOTBOX is the key to making restaurant-quality food possible at New York events, wherever they happen to take place. And it’s an oven with no controls, no dials, no doors—more like a hot air balloon if your kitchen stove’s a Cessna. It takes thousands of hours to be able to cook in it well.
Which brings us to a few of the brass-tacks insights about special-event cooking that readers will glean from our book:

• Warm catered food is almost always twice-cooked: once at the prep kitchen (sometimes a day or two before), and then again at the venue. (Which, for those of you who know about food safety, brings an extra measure of hazard to the equation).

• Pricey steaks and chops are almost always deep-fried in large batches, to achieve the perfect seared exterior. (Then they get reheated at the event.)

• There’s often a secret vegetarian main course, even if you don’t see one on the menu. The so-called “silent” vegetarian option is standard in most cities nowadays, and in our experience is often the best choice.

In HOTBOX, we also pan back from our party reportage, and explore the history and the culture of catering—how did we get here? Who invented the hotbox technique? Readers get to meet the sages and eccentrics who often birthed their businesses in apartment kitchens—in one case using a bathtub as a salad bowl when the parties got big!

We take readers inside Party Rental Ltd., the category killer in rentals, whose 600,000 square foot warehouse in Teterboro services catering companies from DC to Boston. Did you know: if you live in the Northeast Corridor of the U.S, you can place a call to Party Rental Limited today before 4PM, you can have a cotton candy machine, 4,000 fish forks, twenty birds-egg blue tablecloths, ten silver samovars and a giant refrigerator delivered to your door tomorrow at 9AM?

We also explore the ways in which the explosion in food allergies and preferences has made a nearly unbearable job even more difficult. We sit down with the most avant-garde innovators of catered food—whose role becomes ever more desirable (if readily cloned) by Instagram and social media. And readers meet the young, dynamic caterer who’s taken some of the financial stress out of his operation by only catering to the kind of client who sends his Gulfstream jet to Paris to secure four poulet-de-bresse chickens for a small dinner party.

The question hanging over our four years of research has been: What kind of chef is drawn to this rootless world of unreasonable expectations and extreme work conditions? Who chooses to throw herself into the breach like this, night after night?  We think we found the answer, and it may surprise you. (But you’ll have to read the book to find out.) -- Matt Lee and Ted Lee

At left: Hotboxes headed out to a party.  At right: Working the hotbox 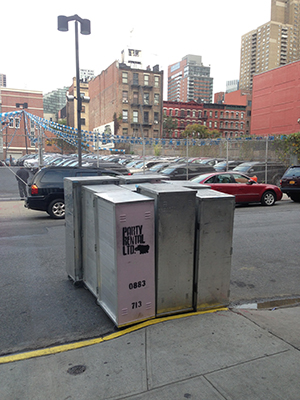 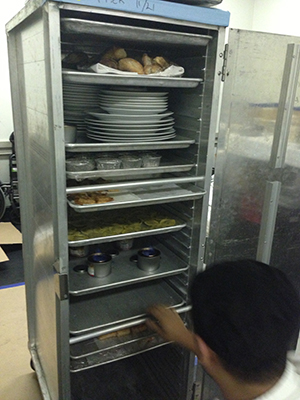 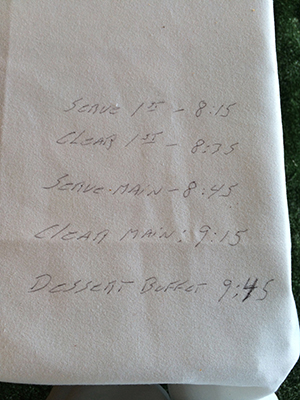 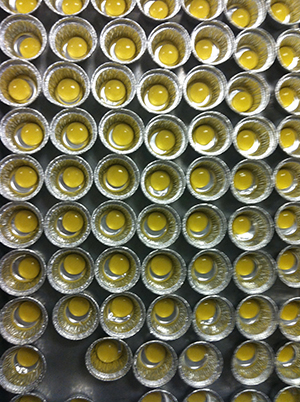 Burrata salad plate up, behind the pipe-and-drape. 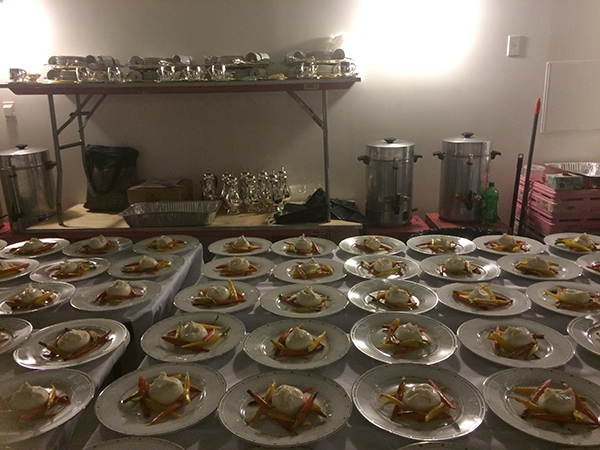 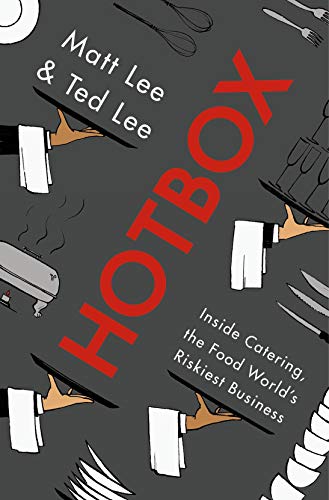