Too Good to Be True: An Interview with Benjamin Anastas 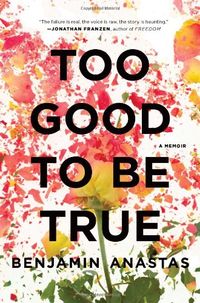 Benjamin Anastas's first novel, An Underachiever's Diary, was hailed as the "funniest, most underappreciated book of the 1990s"; his second, The Faithful Narrative of a Pastor's Disappearance, was named a New York Times Notable Book. Then Anastas's personal and professional lives fell apart. His new memoir, Too Good to Be True, tells the story of this dramatic downward spiral—and how he slowly, painfully inched his way out of it.

In a recent email interview, the author answered questions about parenthood, process, and how to stake your claim as a writer.

Mia Lipman: This book is raw—much of it is a chronicle of personal failure. Was it cathartic or painful to write?

Benjamin Anastas: I started writing the book at one of those moments when nothing was working: I couldn’t pay my bills, I kept sending off résumés but never hearing back, my girlfriend was getting freaked out by my broke-ness, even my four-year-old son had started to bemoan the fact that we could never buy anything. It was a historically bad time. So when I started to write about it, I felt an immediate sense of relief—not that my troubles were magically over, but that I had some agency again. I could write about the feeling of living in a time and place—Brooklyn in the era of the $2 million brownstone—that just didn’t seem real sometimes. It definitely helped.

For most aspiring authors, just getting a book published seems like summiting the mountain. Your first novel was a hit, but it didn't guarantee more success. Do you think there's a point at which a writer can truly relax about the future?

Before I became a parent and ran into this extended stretch of trouble, I'd always subscribed to the F. Scott Fitzgerald school of economics: Sell a book, quit a job. Pay off your “terrible small debts” and decamp to Europe. Not anymore! Writing is too precarious, the rewards too delayed; aside from the harsh realities of trying making a living, there is the constant fear that the well is going to dry up. I don’t think there’s ever really a point where you’ve “made it” and can just relax. There’s always that next book gnawing at you, taunting from the other side of the empty page.

Too Good to Be True closes with a letter to your son. Is this book a diary of sorts, one you'll want to share with him when he's older?

My son knows about the book. I’d like him to read it when he’s older, but I’m not going to push it on him. I want his own curiosity to be his guide. While I was writing, it slowly became clear to me that he was my intended audience; that in going back to unravel the story of his origins, I was trying to free him of the bondage that comes from not knowing, the deceptions that families conspire to create and keep hidden over time. As a child of divorce myself, I never wanted him to question my commitment and my love.

You've written novels, nonfiction, short fiction, essays, reviews. Do you have a different state of mind for each type of work? Or is your creative process the same?

I’m afraid that on a certain level, all writing is the same: You keep throwing your net into that blank white space and hoping you’ll drag something remarkable out. But each form calls on different skills, asks for different feedback from your mind and heart. A novel can linger in your life for years on end; writing this memoir was a short-term entanglement. I can think of magazine articles that have taken me so long to finish that I could have gotten 100 pages into a new novel in the same time. It’s always an adventure, that’s the only constant.

You're a teacher as well as an author. What’s the most important thing you say to new writers? Where should they start?

I don’t have any kind of program for success that I pass on to younger writers. In a way, it’s pretty simple. If you have the bug, you’ll write. If you’ve got a particularly bad case, then you’ll do it to the detriment of pretty much everything else in your life. That’s unfortunate, and there are ways to mitigate the damage—but anyone who’s serious won’t listen to you anyway, and they’ll keep on writing because they just can’t stop.

There is one thing I’ve learned over the years that I wish someone had told me: Your life will be infinitely better, and you’ll suffer from much less doubt (am I any good? Am I really a writer? How come nothing dazzling seems to be happening when I’m working so hard?) if you make sure that, whatever you’re writing, you’re the only person in the world who could have done it. Make it your own, and be ruthless in your grab for ownership. It’s like prospecting out there. Stake a claim on your own gold mine.