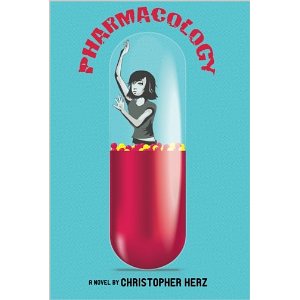 Emily Rubin is the author of Stalina, the International Book Award Finalist. She divides her time between New York City and Columbia County, New York, with her husband and their dog. Read her exclusive guest review of Christopher Herz's Pharmacology:

I have had many memories and stories of the great city of San Francisco, and now to add to that list is Christopher Herz's latest novel, Pharmacology, set in that gem of the West coast. Herz uses the city as a playing field for this fast paced novel with bohemian beauty and a gaggle of eccentric inhabitants on the verge of a revolution. The upheaval is technological, and he catapults us back to the early 1990s when the Internet was about to change the tools of communication forever.

Pharmacology follows Sarah Striker, a writer/artist transplant from Kansas City, who comes to San Francisco with a fire in her belly for all things activist and literary. On her nights off from pushing caffeine at a hip coffeehouse, she produces an underground lit mag called Luddite. She uses the journal to rage against the machine. The irony of producing the magazine at the local Kinko's is not lost on the radical, yet very practical, Sarah.

When her barista days are over, Sarah is wooed by an ad agency with a roster of clients from the pharmaceutical industry. Attention Deficit Disorder is the illness of the hour and the ad agency's job is to instill panic for this scourge on the nation's youth--as well as promote the latest FDA approved drug designed to quell the epidemic.

Sarah spends her days "focused on finding ways to spread the word on how the Internet and Ecstasy were causing the youth of America to develop ADD." At night she continues to produce Luddite, fueled by her desire to expose the greed and lies at the center of the corporate greed machine. Her crisis of conscience is ameliorated by the popularity of the underground journal, and by sending home money from her day job to help pay for her beloved father's cancer treatment.

Herz's incisive look into the early days of the internet and his skewering of the fear tactics used by the pharmaceutical conglomerates includes some of the most eccentric supporting characters I have ever encountered. Sarah comes home to a house filled with cross-dressed, perpetually high, vampire teeth-implanted housemates who level the playing field and add a dose of reality to this brutally honest look at our not-too-distant past. Pharmacology is a Tales of the City for an Internet-savvy generation. This novel takes off from the bedrooms and back stairs of Maupin's classic stories, pulls us right to the teetering edge of cyberspace, and pulls us through with lots of literary angst and discoveries, sexy encounters, wobbly high heels, and the dreams that come with new beginnings. --Emily Rubin