Therapy in Reverse: An Interview with Barbara Kingsolver 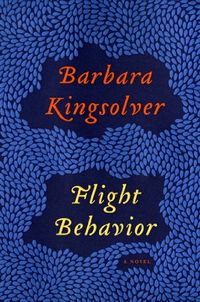 Barbara Kingsolver is the award-winning author of 14 works of fiction and nonfiction, including Pulitzer Prize finalist The Poisonwood Bible. Her latest novel, Flight Behavior, was selected by Amazon's editors as a Best Book of the Month and one of our Best Books of the Year in 2012. We sat down in New York City to talk about Ms. Kingsolver's new book, the intersection of fiction and science, and why literature should be "mandate-free."

Mia Lipman: I have a friend, a high school teacher, who calls your books "faction"—a combination of fiction and fact—and says that he and his students learn from them. When you write novels, do you intend to educate? Or is that a bonus byproduct?

Barbara Kingsolver: I would say it's a byproduct. If someone does learn about the world from reading a novel of mine, that makes me very happy. It's probably not what brings me into the novel in the first place—I usually am pulled in by some big question about the world and human nature that I'm not going to resolve in the course of the novel. But I'm very devoted to getting my facts straight.

I didn't study writing in school, I studied biology as an undergraduate and graduate student. So I think that I write fiction in the scientific way. I love invention, obviously; I love creation of character. But I do feel very rooted in the real world, even in the way that I create characters. I begin with themes, I think about the plots that are going to reveal these themes as people address big questions…and then I think about character and psychology and kind of work as a therapist in reverse, because I have to back up and give these people whatever background—and even damage—will render them believable in the actions that they're taking. So I try to invent my people in a realistic and fact-based way.

If my setting is new to a reader, or the concerns of the novel are new, I hope they will learn something about the world. I would like to say that they can trust that what they do learn in the novel will be accurate, because I pay a lot of attention to facts. I do a lot of research to make sure that I'm not giving them, you know, blue moons of Jupiter. It's not science fiction.

Flight Behavior incorporates your well-known passions for environmentalism and sustainability—as you mentioned, you trained as a biologist. Is it a challenge to bring social responsibility into the worlds that you create, or does that happen organically?

I would say it's probably completely incidental. It's not what I'm setting out to do. I'm not trying to tell anyone how to think or, heaven forbid, how to behave—that's not the domain of fiction at all. In fact, one of the things that I really love about literary fiction is that it's one of the few kinds of writing that doesn't tell us what to think or what to buy or what to wear. We're surrounded by advertising—

Mandates! That's exactly the word I was looking for. We're surrounded by mandates, and I believe that literature should be mandate-free. I feel very strongly about that. However, because I write fiction that is based in the real world, it's going to lead people into some of the modern dilemmas and concerns and even catastrophes that they will think about in a new way…. I'm not going to tell them how to feel, I'm just going to tell them: Here we are in this particular pickle. That's the situation in this novel—it's leading the reader into some knowledge about the new world we live in, in which the climate has already changed.

That's right. But I'm never going to tell the reader what to believe; I'm going to examine these characters that believe different ways, and examine their motives. What are the motives that drive denial? Because we all have our favorite denials [laughing].

It's a really important part of human life. And in some sense, it's how we all get through our days. I've kind of avoided talking about the plot so far, but in this novel, which is set in a rural place in Southern Appalachia, something happens—which I'm not going to describe—but something happens that looks very beautiful and miraculous, and it may also be catastrophic. And it attracts a lot of attention, but the rural people who live in the middle of this beautiful catastrophe have to figure out what to do with it. So that's the point of entry. It's about human psychology and it's also about the world, and there are scientists in this novel who are working out exactly what is happening.

When I think of your work, I think of strong women: Taylor in The Bean Trees, the Price women in The Poisonwood Bible. In the character of Dellarobia, you have another female protagonist with a very strong and very real voice. Do you shift your approach when you're writing from a male perspective, as you did in The Lacuna?

Not really. I don't begin with gender, by any means. I begin with character. I knew that for this story, I needed two important characters: one who was smart but very naïve, very unworldly, and who had had a very narrow life. So I thought that it made sense for her to be a young farm wife who got trapped, who had to give up her own plans when she became pregnant and got married at 17. She's never been off the farm—she's been in this pretty stultifying life with in-laws who don't like her, don't ever approve of her, and economically they're really struggling. So she's a person who started out with big dreams, but she's never seen the world. And I thought that she was a perfect kind of character [to bring readers] into this story, to let them see the world through her eyes, and then explode her life outward. Chapter by chapter, her very restricted life opens. First she becomes an important player in her family, then in her church, then in her community and in her state—and then, of course, it goes viral. So in the course of just a few months, [Dellarobia] has to deal with a lot of new information and new kinds of people. Having you see this all through her eyes was a very handy device.

And the other important character is kind of her opposite. This scientist, Ovid Byron, has seen the world. He's traveled, he knows a lot about what is going on—but there's a lot he doesn't understand about not just the local culture and the local people, but about what it is like to be a person of limited means. And so putting those two characters together and creating this chemistry was really fun.

In addition to novels, you write essays, poetry, and nonfiction. Are you drawn toward a given medium based on what's happening in your own life, or are there outside forces at play?

Once I heard the great poet Lucille Clifton give a reading. And someone in the audience asked, "Why are your poems always so short? They're never more than about 14 or 16 lines long." And she said, "I raised six children, and that's how many lines I could hold in my head through the whole day. I was waiting to sit down at my desk and write." So I can relate to that, because at the time I heard her say it, I had a small child. I had a baby that I left with a babysitter for one hour so I could go hear Lucille Clifton. So undoubtedly for all authors, and certainly for authors who are women raising children, there are constraints on our lives that will affect the shape of our work. And I'm no exception, but I've been very lucky to have a very cooperative family that allows me to write whole novels, usually with a few interruptions. [Laughs.] But I also feel that having a family life…has enriched my life immensely and given me any wisdom that I have.

Speaking of wisdom: In 1999, you established the Bellwether Prize for writers who've never published a major novel. When new writers seek out your advice, which I imagine they often do, what's the first thing you tell them?

Quit smoking. [Mia laughs.] Because I think that when people read fiction, they're really reading for wisdom. I am. That's what most of us really love. If we read a novel that rocks our world, it's because there's something in it that we didn't know already. Not just information but really wisdom—sort of what to do with our information. And wisdom comes from experience, so…

So you want them to live a long time.

Exactly. The longer you live, the more likely you are to have something to say.