When I first heard that Miss Peregrine's Home for Unusual Children was being made into a movie, I was worried. There's so much
magic in the book and the way author Ransom Riggs brings his vision to life in my head isn't something I want to give up for a movie that I can never un-see (case in point: Ben Affleck as Nick in Gone Girl--I took a pass on that one).  But then it was announced that Tim Burton was directing the film adaptation and my concerns vanished.  If anyone can make this movie great, it seems to me Burton's the guy...

The film doesn't release until September 30th, but we can get a sneak peek in The Art of Miss Peregrine's Home for Peculiar Children which goes behind the scenes of the movie with set photography, interviews, and more.  Below you'll find a few photos from the book along with an excerpt from Tim Burton's introduction.

Before Miss Peregrine’s Home for Peculiar Children became a film, it was a novel by Ransom Riggs. There were so many facets that drew me to Ransom’s book. The photographs spoke to me on an emotional level; there was a sense of mystery, power, and creepiness. I liked that they provoked my imagination, and that I didn’t immediately know everything about the images. The narrative was reminiscent of a fairy tale or a fable. It mixed up the past and present, and centered on kids who have strange abilities, afflictions even, that they manage to live with and incorporate into their lives.  They aren’t superhuman, but they are unusual. And like any good fantasy, the story was rooted in reality and drew on real feelings. Every step the novel took was unexpected and didn’t follow a traditional path. I liked that the book is not so easily categorized. It has been classified as young adult, dark fantasy, but as is often the case with categorizations, this seems unnecessarily limiting. I think it’s for all ages, and I never understood the classification of what is considered dark. I often find what is considered normal—such as going to school or having my aunt visit—as some of the most terrifying ordeals I have endured. On the other hand, I find watching a monster movie comforting. I think those kinds of films are an outlet, that they give people a way to cope with psychological sentiments in their lives they are trying to understand. I found Ransom’s novel compelling in a similar way to old horror movies, and I was drawn to the material enough to make a movie about it because I wanted to further explore Miss Peregrine’s world.

I’m always asked why I’m so attracted to the outsider, and I think it’s because many people have felt that way at one point in their lives. Once they have, no matter how popular people become, or successful, those feelings of not fitting in are still there—it’s written into their DNA. I can certainly relate. Jane Goldman, who really understands peculiar people, has done a fantastic job of translating the vibe of the novel into a script. Basing a film on a book is sometimes one of the hardest transitions, because they are such different scenarios. But the most important aspect, which I feel she’s done, is to capture the vibe that attracted us both to the book in the first place. It’s a balance of many different elements—it’s a little scary, a little funny, a little mysterious. Like the book, there’s also a simplicity to it. It’s very human based, which I think is important to retain, so that people can identify with the emotions of the characters.

A PEEK AT SOME PHOTOS AND CAPTIONS FROM THE BOOK (photo credit: Leah Gallo)

Ransom Riggs on location in Belgium 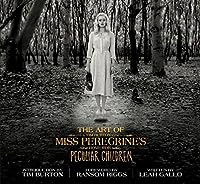