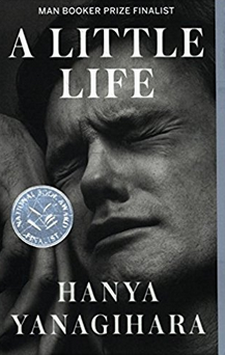 No, the man to the right is not passing a stone. He's doing...something else. Find out what if you read one of the most celebrated books of 2015 (but steel yourself, it's a doozy). Also in this edition of Weekend Reading, one of our favorite memoirs of last year, a classic you should revisit before it hits the big screen, and a mystery reminiscent of Patricia Highsmith.

Seira Wilson: I loved Alan Bradley’s The Sweetness at the Bottom of the Pie and his other Flavia de Luce novels, so I’m excited to read his latest: The Grave's a Fine and Private Place. The Boston Globe has called young sleuth Flavia a cross between Eloise and Sherlock Holmes, which I couldn’t agree with more. This time the mystery begins when Flavia discovers a body afloat while on a “relaxing” vacation. In a totally different direction, I’m nearly done with Hanya Yanagihara’s A Little Life. What an incredibly moving story of friendship and family between four friends. Some of it is hard to get through, my heart is breaking for Jude in particular right now, but the friendship between these young men is so authentically written and I’ve grown to love them all so I really want to see how it all turns out.

Erin Kodicek: One of my favorite books of 2017 is Bill Hayes's Insomniac City. In this affectionate and magnanimous memoir, the author, artist, and partner of the late, great Oliver Sacks pays tribute to their relationship, and provides a paean to one of the other loves of his life: New York City. It also features some of Hayes's photography, candid snapshots of New Yorkers in their element. That whet my appetite for more so I'm delighted that Hayes is releasing How New York Breaks Your Heart next month (Feb. 13). It's a beautiful companion to Insomniac City and a standalone volume that captures the comedy, tragedy, and magic in the everyday.

Adrian Liang: Our family plans to read (or reread) A Wrinkle in Time by Madeleine L’Engle together before the movie comes out on March 9. I honestly and ashamedly don’t remember much about it from when I read it the first time as a child, but I want to experience L’Engle’s words again before I see the adaptation on the big screen. Looking ahead at forthcoming books, I can’t wait to dive into Skin in the Game: Hidden Asymmetries of Daily Life by Nassim Nicholas Taleb, which is among our editorial team’s 10 most anticipated books of the new year. The author of The Black Swan and Antifragile, Taleb is a writer I can depend upon to take a unique view of how the world really operates and prompt aha! moments of clarity, all the while infusing his observations with his own idiosyncratic style. Last but not least, I want to raise a glass of French wine to honor Peter Mayle, the author of A Year in Provence, who passed away yesterday. Mayle’s warm and funny memoir of moving into an old house in the French countryside has likely inspired many tourists to go beyond Paris and into the colorful heartland of France to savor the food, the seasons, and the delightful small towns and back roads. À votre santé, Peter Mayle!

Sarah Harrison Smith: I really don’t like Gothic novels--but I really liked Tangerine. And the one time I visited, I really didn’t like Tangiers --but I really liked Tangerine. Christine Mangan’s debut novel takes its name from Moroccan slang for a foreigner under the sway of that ancient coastal city, and the book's a little like the fruit, too: divided into segments, and ending, in a circular way, where it begins – with an unnamed crazy woman locked up under a nurse’s care. Tangiers is famous for its literary associations, including writer Paul Bowles, whom Mangan alludes to explicitly in this suspenseful novel of mistaken identities, which will remind readers of Josephine Tey’s classic mystery, Brat Farrar and the urbanely creepy novels of Patricia Highsmith. Ecco is publishing Tangerine at the end of March, so you’ll have to wait -- just long enough to work up an appetite.

The Question of the...
Read