“Seeing My First Novel out in the World Was a Shock," but Not to My Mother 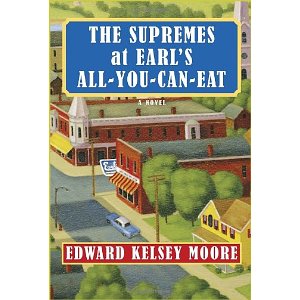 When we placed Edward Kelsey Moore's debut novel on March's Best Books of the Month list, Amazon Editor Mari Malcolm described the book as having many of the same "winning qualities" as The Help and Steel Magnolias, calling it "an utterly charming, often hilarious tribute to friendships." Readers seem to agree, as the book debuted on the New York Times best seller list this week.

What has the debut experience been like for the author? He tells us below.

The first time I held a copy of my novel THE SUPREMES AT EARL’S ALL-YOU-CAN-EAT in my hands I couldn’t bring myself to set it down. The morning that the book arrived by overnight mail, I walked through the house, placing it on different surfaces. I had to see it in every room to prove to myself that it really existed. Even though the book had lived in my mind for years by then, actually seeing my first novel out in the world was a shock.

My mother doesn’t feel any such sense of wonder. Mom says, “I’m not surprised at all. It’s just an extension of your talking.  You know how you are. Since you were a baby, you never wanted to shut up.” My mother is also one of the few people in my life who wasn’t surprised when, after decades as a musician, I became a writer. She says, “I knew you’d get to it eventually. It’s always about the words with you.”  Preacher’s wife that she is, my mother also takes the time to remind me that divine intervention is at work with all things at all times. “You know where all these blessings come from, don’t you?” she often asks me.

I’ve spoken often about how much THE SUPREMES AT EARL’S ALL-YOU-CAN-EAT owes to the all-female after-dinner chats I eavesdropped on when I was a child. Mom was a central participant in those conversations and the novel’s publication has meant an opportunity to talk with her about those women, many of whom have passed away.

My mother says, “Auntie would be so proud,” speaking about my great-aunt Oleytha, the best storyteller I’ve ever known. Family lore states that when I was six months old, Auntie astonished my mother and amused herself by getting me to repeat simple words at her prompting, beginning a back and forth between us that would go on for decades. A highlight of my youth was hearing my great-aunt Oleytha recap the funerals she attended as a Christian duty and for entertainment value. Anyone fortunate enough to hear Auntie offer a review of a funeral that didn’t live up to her rigorous standards would feel inspired to produce at least a short story in her honor. My mother also insists that her sister Nanny would have loved the book. That’s a safe bet because Aunt Nanny, one of the funniest people I’ve ever known, found a way to squeeze joy out of any situation. Talking to my mother, I am reminded of Aunt Nanny’s early passing, but also of how she spent her final days being so incredibly funny that doctors and nurses came to see her, a dying woman, in order to be cheered up.

In the short time since THE SUPREMES was released, I’ve heard from some of the others who sit around the table after Moore family meals. They are all less surprised than I am that I’ve become a published author. They remind me that I was a kid who always had something to say, and then they offer stories to back that up.

Check out my website (www.edwardkelseymoore.com) and let’s keep talking.