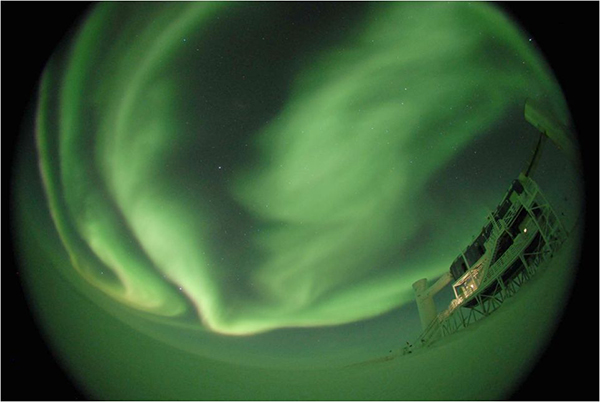 The IceCube Laboratory Under the Aurora Australis, taken with a fisheye lens (Robert Schwarz, IceCube/NSF

There's strange stuff happening in Antarctica. Mark Bowen gets to the bottom of the search for extraterrestrials—neutrinos, that is—with his book, The Telescope in the Ice: Inventing a New Astronomy at the South Pole. Here he provides five facts about an almost incredible new tool for exploring our universe.

The Telescope in the Ice is about the building of IceCube, which Scientific American has called the “weirdest” of the seven wonders of modern astronomy. I’ve been “embedded” in the project since 1998, so I offer an insider’s view of the unusual group of dreamers who have built this crazy telescope: the mistakes they’ve made, the blind alleys they’ve gone down, the solutions they’ve found, their conflicts, their teamwork—and their successes.

Located at the U. S. Amundsen-Scott Research Station at the geographic South Pole, IceCube is unlike most telescopes in that it is designed not to detect light, but a strange elementary particle called the neutrino. This is not an easy thing to do, so the Fellowship of the Cube, as they sometimes call themselves, have had to be extremely persistent. The project began in 1987, and they didn’t detect their first extraterrestrial neutrinos until 2012, a quarter of a century later. In the meantime, the project almost died three or four times. There’s plenty of adventure in this story—both on the ice at South Pole and in the science of neutrino astronomy.

Five things you should know about IceCube.

This telescope is actually is made out of ice: A cubic kilometer of diamond clear ice, a mile and more beneath the polar surface, outfitted with a grid of more than 5,000 light sensors. The ice itself is the basic detector: when a neutrino collides with an atomic nucleus in the ice in or near the sensor grid, or even in the bedrock below it, the neutrino will die and give birth to a charged particle that travels in the same direction as the neutrino, dragging a cone of a pale blue light along behind it. By tracking this streaking particle as it passes through the grid, the physicists can determine the direction of the parent neutrino.

The neutrino is sometimes known as the ghost particle. It may be the most plentiful particle in the universe—several hundred billion will pass through your eyeballs by the time you finish reading this sentence—but it is rarely seen, and it won’t hurt your eyes, because it barely interacts with any kind of matter. This makes it very hard to detect. As Nobel laureate and amateur stand-up comedian Leon Lederman once said, “A particle that reacted with nothing whatever could never be detected. It would be a fiction. The neutrino is barely a fact.” Your average neutrino will pass unscathed—and therefore undetected—through a slab of lead one light year, or six trillion miles, thick. 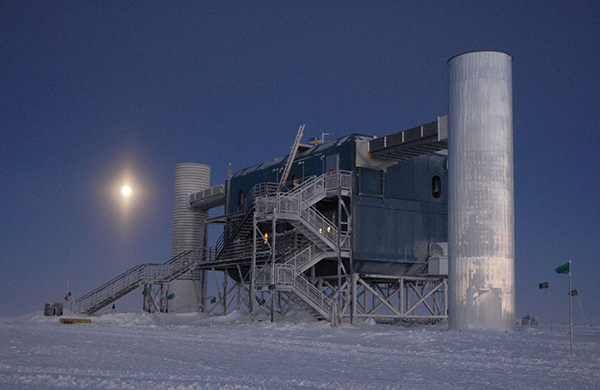 The Laboratory in WInter Under a Full Moon (IceCube/NSF)

Not a surprise, but guess what: the South Pole is a hard place to work. The temperature rarely rises above zero Fahrenheit, and in winter it can drop below a hundred below. There is only one “day” a year there. The Sun rises and sets at the equinoxes, on about September 21st and March 21st, but the working season is limited to about four months, because the military transport planes that shuttle people and equipment in and out of the station are only allowed to fly when it’s above minus fifty. A skeleton crew of “winterovers” keeps the station and the scientific experiments running for the eight or nine cold, dark months of winter. They say it is sublimely beautiful under the extraordinarily clear, star-filled skies, with red and green aurorae shimmering overhead.

The real adventure is in the science. Yes, there is plenty of derring-do on the ice in this story, but what really drives these people is the thrill of the chase. In fact, the man who dreamed the project up thirty years ago and has led it ever since, physicist Francis Halzen of the University of Wisconsin, has never been to the pole.

IceCube is helping to usher in the new era of “multi-messenger astronomy.” With the recent detection of gravity waves, which won this year’s Nobel Prize in physics, and IceCube’s ability to detect neutrinos, astronomers now have two new messengers in addition to light to bring us news from the distant cosmos. This is an epochal development, since light has been pretty much our only cosmic messenger, ever since the first woman stepped out of her cave and looked up at the twinkling stars. It is also brand new: Just this August, three gravitational wave instruments detected the merger of two neutron stars, told optical astronomers where to look, and dozens of telescopes observed the resulting gamma ray burst—the first time two different messengers brought us news from the same object. Exactly a month later, IceCube detected what was most likely an extraterrestrial neutrino, again told optical telescopes where to look, and they found an active galaxy called a blazar, one of the brightest objects in the universe, exactly where the neutrino was pointing. (More on this on my blog.) 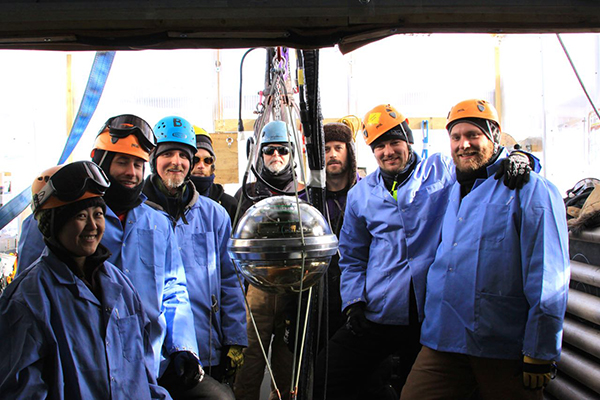 The Telescope in the Ice: Inventing a New Astronomy at the South Pole
Mark Bowen
Print Book Kindle Book