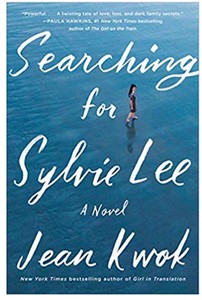 The Lee family is rocked when the eldest daughter, the golden child, goes missing. When her sister travels to the Netherlands to investigate, she uncovers a tangled web of secrets that eventually lead to some painful truths. Jean Kwok's Searching for Sylvie Lee is the smart literary thriller you want to read this summer. Here, Ms. Kwok explains the overarching theme of this propulsive novel: "How the limits of culture and language can stop us from truly knowing the people we love most in the world."

We’ve all had that experience, when someone we thought we knew well turned out to be completely different from our perception of them: the dutiful wife who met her lover in the afternoons, the responsible assistant who stole cash from the register, the boring clerk who wrote passionate poetry at night. This shifting of expectations is especially jarring when that person is someone close to our heart, like a spouse or sibling.

I’m no stranger to secrets. In fact, I grew up keeping secrets from everyone I knew. I’m a first generation immigrant and after my family emigrated from Hong Kong to New York City, I adapted much more quickly than my parents and older siblings. I was extremely poor, living in an unheated apartment in Brooklyn, and working in a factory in Chinatown every day after school while I was still a child. I lied to my new American friends about what I was doing in my free time each day and I deceived my family about the tests I was failing because I didn’t speak English. This only grew worse as I grew older and attended exclusive schools like Harvard, where I continued to hide my working class background.

I often felt like no one truly saw who I really was, even though I was standing right there, next to them. When my dear older brother died in a plane crash and I had to step up to help figure out what had happened to him, the idea for Searching for Sylvie Lee was born.

Searching for Sylvie Lee is a suspenseful family drama about long-buried secrets that tie together a mother and her two daughters. It’s about what happens in this Chinese immigrant family when the gifted, dazzling eldest daughter (Sylvie) disappears on a trip to the Netherlands and the younger, timid daughter (Amy) has to pull herself together and follow the tracks of her beloved older sister to figure out what happened to her.

As I wrote the novel, I thought about how little we sometimes truly know the people we love most, especially when we are divided by language and culture. So I let the narrators, the mother and the two daughters, tell the story in their own voices and in their own languages. Of course, the book’s written in English but each woman is thinking in her own language—English, Chinese, and Dutch—and is confined by the perspective of her culture.

So we watch as the younger sister Amy finds out Sylvie is missing and we see Ma through English-speaking Amy’s eyes as a beloved but simple woman who can only utter sentences like, “Sorry, so sorry.”  But then Ma’s chapter opens, where Ma is thinking in Chinese, and we realize that Ma is a completely different person from the one Amy knows. Ma is passionate, wise, and intelligent. Finally, Sylvie’s chapter begins where Sylvie is thinking in Dutch because she was raised by her grandma in the Netherlands for much of her childhood, since Ma and Pa hadn’t been able to afford to keep her. Sylvie’s chapter is also backdated a month so we see Sylvie experience all the events that led to her disappearance. In Amy’s narrative, we follow Amy as she unearths clues to try to find her sister.

I basically made the reader trilingual over the course of the novel and therefore, the reader is the only person who sees the truth of all three narrators. At the end of book, the reader is the only one who is privy to the entire story. Searching for Sylvie Lee is an exploration of romantic love, the love between mothers and daughters, and how the limits of culture and language can stop us from truly knowing the people we love most in the world.