Adam Rutherford on Surprises in Our Genetic Past (Like: Interbreeding!) 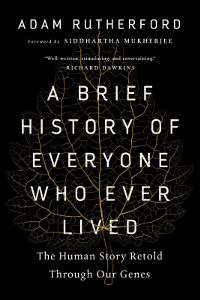 Adam Rutherford's fascinating and lively exploration of humankind's roots in A Brief History of Everyone Who Ever Lived includes the surprise that our own personal genetic history is far more closely intertwined with, well, everyone on the planet than you'd think.

How close are we to each other? Adam Rutherford explains:

They say that there are only seven stories, endlessly retold with infinite variations. But in truth, all of them are merely asking the same question: Who am I?

Where do I belong? Who are my family, or tribe, or race, or culture or civilization? Where do I fit into the grand sweep of human history, or indeed the four-billion-year history of life on Earth? Genealogy is America’s number-one hobby. That makes sense in a nation where the roots of most of its citizens cannot be traced on US soil further than 500 years. But there is a conundrum in the middle of our quest to trace our family story. It’s got some sticky math in it, but makes a lot of sense. Consider two facts: 1) There are more people alive today than at any point in history; and 2) everyone who ever lived had two parents.

These are two facts in apparent conflict. If we take the second point first, the number of ancestors you have doubles each generation into the past – two parents, four grandparents eight great grandparents, etc. But that doubling cannot go on indefinitely, because of the first fact. Assuming a standard 25 years as the time for a generation, one person should have more than 2 million ancestors if we go back to 1492, when Columbus made landfall in the Americas. Go back a thousand years, and you have more than a trillion ancestors, which is many times greater than 107 billion people who have ever existed. So what’s going on?

The answer is this: We are all somewhat inbred. After a few generations into your past, multiple positions are occupied by the same people. Family trees expand upwards and outwards for a few generations, and then our pedigrees collapse in on themselves into matted webs. You have 32 positions for great-great-great-great-grandmother, but it may well be that fewer than 32 women filled those positions – meaning that you will be descended from some of those people multiple times. Individual lines in your family tree will cross through these people at the same time.

The math that ultimately falls out of this seeming conundrum is both utterly baffling and logically tight. There is a time in history where all lines of all family trees cross through all people alive at that time. We call this the genetic isopoint. Another way of phrasing it is to say, "If you were alive at the isopoint, and you have living descendants today, then you are the ancestor of everyone alive today."

When the isopoint for Europe was calculated a few years ago, the answer came out as the tenth century. What that means is that if a person was alive in the tenth century in Europe, and has living descendants today, then they are the ancestor of everyone in Europe alive today. We think that maybe three-quarters of tenth-century Europeans have living descendants, though the family trees of them are rare. We know that, for example, the first Holy Roman Emperor, King Charlemagne, lived and ruled in the ninth century and has living descendants today. Which means that if you are European, you are descended from Charlemagne.

Equally baffling, the isopoint for the whole of the world is the 14th century BCE. Everyone alive today is descended from the world population at the time of Pharaoh Rameses II, or the presumed birth of Moses, or the writing of the Bhagavad Gita.

The indigenous peoples of the Americas were founded by a small population that migrated across what is now the Bering Straits to Alaska around 20,000 years ago. The global isopoint would be significantly earlier than the 14th century BCE if not for the arrival of Columbus and his men in 1492. Upon arrival, they immediately raped local women, and 500 years of European presence in the Americas means that there is European ancestry in all people of both North and South America.

So, who are we? We are humans. Our species is remarkably closely related; we only have to go back a few centuries before we share common ancestry with all humankind. 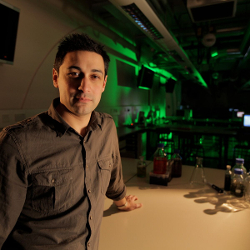 Adam Rutherford is a science writer and broadcaster. He studied genetics at University College London, and during his PhD on the developing eye, he was part of a team that identified the first genetic cause of a form of childhood blindness. He has written and presented many award-winning series and programs for the BBC, including the flagship weekly Radio 4 program Inside Science, The Cell for BBC Four, and Playing God (on the rise of synthetic biology) for the leading science series Horizon, as well as writing for the science pages of the Guardian. His first book, Creation, on the origin of life and synthetic biology, was published in 2013 to outstanding reviews and was short-listed for the Wellcome Trust Prize.

A Brief History of Everyone Who Ever Lived: The Human Story Retold Through Our Genes by Adam Rutherford was selected by the Amazon Books editors as one of the ten best books of October. 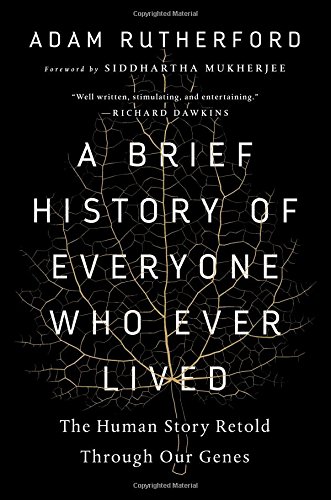