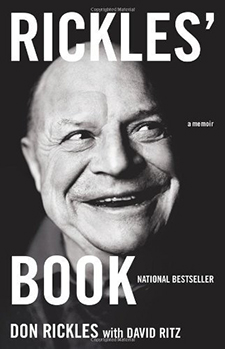 Actor-comedian Don Rickles has passed away at the age of 90. In his memory, we are reposting our 2007 interview with the legendary entertainer. Suffice to say, we were a little nervous going in....

Inspired by watching last night's HBO premiere of Mr. Warmth: The Don Rickles Project, John Landis' moving (and hilarious) all-star documentary tribute to the legendary Don Rickles, I wanted to repost some pre-Omnivoracious highlights from my May 2007 interview with Rickles. I had the honor of speaking with Mr. Rickles about his funny, zinger-filled, and surprisingly heartfelt memoir, Rickles' Book, which had just landed on our virtual bookshelves. Other topics covered included Frank Sinatra, Las Vegas, David Letterman, and much more.

(Rest assured, this blog rerun of sorts has nothing to do with the writers' strike.)

Amazon.com: The book opens with one of my favorite Rickles anecdotes. It's the 1950s. You're at The Sands, on a date (you claim "she was no Gina Lollobrigida"), and in walks Frank Sinatra and his entourage. Would you mind telling us what happened after that as you tried to impress your date?

Rickles: Well, as I said in the book, she said to me, "Don, do you know Frank Sinatra?" I said, "He's like my brother, are you kidding me?" And in those days Frank had security all around him and he was entertaining some wonderful people in the business and in the lounge the glasses were tinkling and in those days they had strolling violins. I got up and walked over to one of the security guys and said, "Tell Frank I'd like to talk to him," and he said, oh sure. And he said, "Yeah, Bullethead, come on over." I said, "Frank, if you can come over... I'm sitting with this girl, it would definitely make it a notch in my gun if you came over and said 'Hi Don'--that's all." "You got it." "Don't come over right away--wait a few minutes."

So I go back to the table and I said, "To you my darling..." and we take a little glass of champagne and I look her in the eyes, blah, blah, blah. And over comes Frank. He walks over and says, "Hey, Don, how are you?" And in a loud voice, I got up and said, "NOT NOW, FRANK! CAN'T YOU SEE I'M WITH SOMEBODY?" And the whole lounge stopped, the violins stopped, blah, blah, blah. Everybody laughed, and sure enough, Frank's got a sense of humor, the security guards picked me up and carried me out over their head.

Amazon.com: I really love how you describe your father in the book. You say, "If he came over to your house and your wife was in a housecoat he could hug her and you wouldn't think twice." What a great line.

Rickles: Well, thank you. Yeah, that's the way he pretty much was. You know, some guys they come over and they can be kind of sleazy, my father was the kind of guy if he didn't do that the women were a little curious that he wasn't feeling well. Because he always did it in a classy, fun way.

Amazon.com: You mention in the book that you're not exactly Internet savvy. Just curious, have you ever purchased anything from Amazon.com?

Rickles: Not to embarrass you, Brad, but I've got troubles just getting the blinking light on the TV to go off. You know what I'm saying? But my wife follows all that pretty good. She keeps me up to date on all that stuff.

Amazon.com: You probably heard, though, that there's quite a Don Rickles fan-site on the Web, called The Hockey Puck. 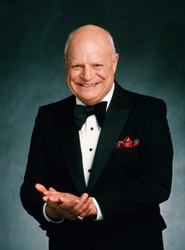 Rickles:   Yeah, well that I know. Oh sure, I know all about that.

Amazon.com: And speaking of which, what is it with hockey pucks? How did that become your trademark--

Rickles: Brad, you're about--and I say that very kindly and respectful to you--the 17th-million guy that's asked me that and I can't pin it down to one particular reason. The only thing I can think of is in my struggling days in saloons--what they called striptease joints--right after the War. For a lack of another word, whenever a guy was bugging me or yelling up at me, I'd say "Don't be a hockey puck!" And I think that caught on. To this day, when I walk down the street when I'm in New York they don't say, Hello, Don Rickles, they say, Hey, hockey puck! You go find out why they do that. I don't know.

Amazon.com: So you're not exactly sick of it, you just can't pinpoint the origin of it.

Amazon.com: What would you say is the key to the perfect insult?

Rickles: When you say "insult," I don't really do insults. I got tagged with that--Merchant of Venom by Milton Berle. Johnny Carson gave me the best one, Mr. Warmth. What I do is, I make fun of people and I make fun of myself and things around us and exaggerate things. And I'm never mean-spirited. See, the word insult means some guy who's a real unkind human being. But I don't do that, because otherwise I wouldn't be headlining all these years, thank god, and all these people showing up to see me. I don't do that. What I do is make fun of people as a way of exaggerating things about all of us--and they tagged me with the word insult. But I never felt that to be the case.

Amazon.com: In the book you talk about your early comedic style and how it developed. You pretty much said "I talked to the audience and I prayed."

Rickles: That's pretty much the truth, Brad. To this day, to this very day, except for television, I've never had a writer. Anything I've ever done on the stage, happened on the stage and I developed it from there. It started doing impressions and jokes--which I did very poorly. To this day I can't tell a joke. That sounds nuts, but it's true. I exaggerate it and it becomes a joke. Everything I've ever done I've done out on the stage and it became a performance over many many years.

Amazon.com: So when you headline now, what's the percentage of spontaneity versus planned material?

Rickles: When someone says to me, do you do stand-up I say absolutely not. I like to think of it as a theatrical performance. With me the show changes maybe five to ten percent every night. Of course, whatever I see in front of me and sometimes I get on a little run about it and it changes the show. And my delivery is such that people who have seen me many times say Gee, I never heard that before. Actually, they have, but I might have changed it around.

Amazon.com: Does your head spin when you look back--when you look at today's family-friendly Vegas compared to how it was back in the day when you first started?

Rickles: I love the early days. I hate to go back with "the early days," Brad, but back when they called it "the bar," but it really wasn't. Back when it was one owner. Like when I worked for the Sahara Hotel there was a man named Milton Down and I only had to answer to him. If you wanted a cup of coffee or you wanted to have a dinner party, Mr. Down said, "Yeah, Don, go ahead." Today you've got to stamp a card and seventeen people--everyone has a card--say talk to him, talk to them... It became more of a corporate kind of thing. It was fun in the old days when it was just one or two people you had to talk up to. But, that's progress. But today it's become big business. It was big business then, but what I'm trying to say when it was a Milton Down situation you didn't have to go through a whole rigamaroll to do certain things.

Rickles: No, no. I don't plan to retire soon. As we get older, the motor... sometimes things happen. Fortunately, I've been very lucky so far. If the motor keeps going, I'll keep going.