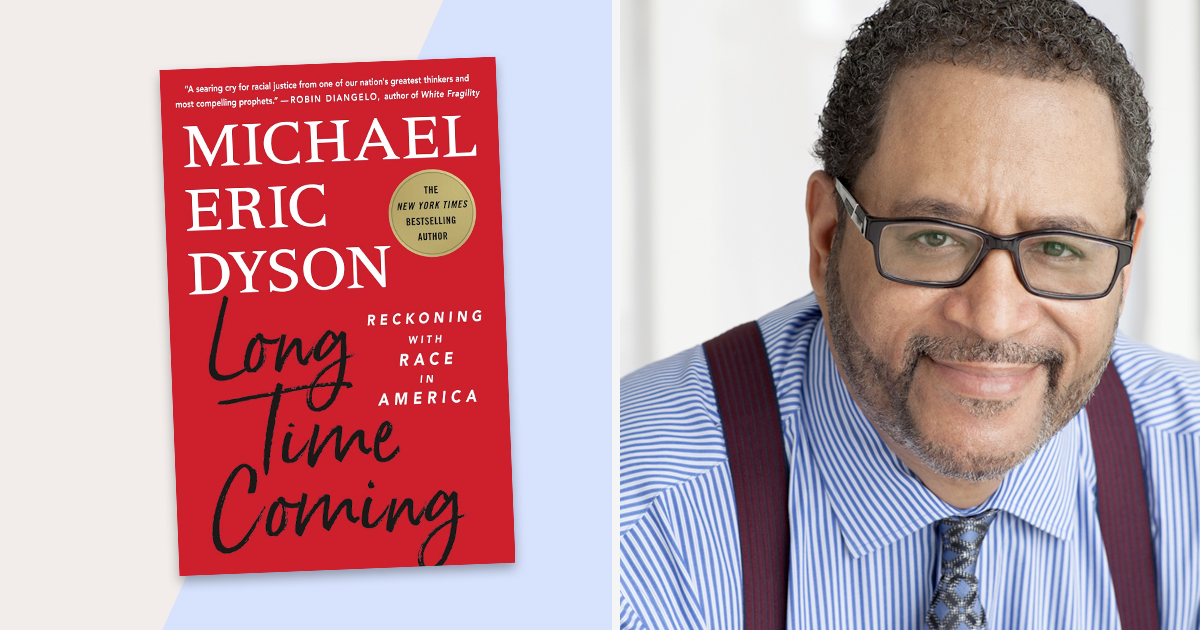 Dr. Michael Eric Dyson is the author of more than 20 books including the best-selling Tears We Cannot Stop as well as his newest book, Long Time Coming: Reckoning with Race in America.

Aside from reading lots and lots of books, one of the best parts of being an Amazon Editor is talking with smart and talented authors such as Dr. Dyson. I had the chance to speak with him over video about his book, the changing awareness of racism in the U.S., and what to do next. Here’s a portion of that conversation.

Adrian Liang, Amazon Book Review: You've written several books. How have your thoughts on race and racism in the United States changed during that time?

Dr. Michael Eric Dyson: I've had a deepening awareness, hopefully a broadening consciousness, and a more profound scholarly grasp on the complexities and the nuances and the interpretations of race. But also as you get older and hopefully wiser, you begin to see that the structural issues are key to deal with, the systemic issues are key to deal with, as well as the personal interactions—and you don't want to confuse the two.

It's very necessary for one-on-one interactions to be enlivened by new experiences, by broadened horizons of understanding, and [to be] informed by a rich tapestry of experience. But you also know that, regardless of what experiences you have and what interactions you have, there's a kind of barrier and obstacle and impediment that persists regardless of what you do on the personal end. And it's hard sometimes when you establish good relationships with people across racial boundaries, and then you have to still pay attention to the fact that regardless of our good relationships or [that we] are simpatico as individuals from different races or ethnicities, there's still this persistence of real trauma and tragedy over here—whether it's police brutality or white vigilantism that prevails—that you've got to deal with. So learning to balance those two recognitions is, I think, key to at least determining how to respond effectively.

Yeah, it's a great way of putting it. People say, “Look, you know, that wasn't my fault, that wasn't my problem. I wasn't even here. My parents just immigrated here a generation ago.” Cool. We get that. But what you've got to understand is you weren't here when the Declaration of Independence was written, but you take advantage of it. You are benefited by it. The advantages that come from the Bill of Rights, from American citizenship (if you happen to be one or as you become one) accrue to you, regardless of the fact that you weren't here at the origin, so there's a kind of sneaky way of avoiding responsibility in that sense. I think it was the great Rabbi Abraham Joshua Heschel who said, “Not all are guilty, but all are responsible.”

And it's also important, as you point out, to try to balance your understanding of individual culpability or even complicity…. When people say, “Well, you know, it's not my individual responsibility…” True. You didn't begin it. You didn't start it. You didn't initiate it. But you do take advantage of it. And you live in a world where people continue to be either disadvantaged by their exclusion from a certain set of privileges that you inherit or they continually find themselves arguing for inclusion in a circle of privilege to which they are barred for no other reason than, say, race or gender or sexual orientation or the like.

In A Long Time Coming, you address each of your chapters to a different Black person who has died violently at the hands of police or of others. And throughout the book, there's a very real and very urgent sense of how Black people feel under siege in the U.S.—a feeling, you say, of “genuine terror.” And then you talk about how this terror comes in speeds. Can you explain your ideas on slow terror and fast terror?

So by fast terror, I mean the stuff you can observe: It's quick, it's powerful, it's explosive. A bomb detonated in a church. Nine people killed in another church by a white vigilante named Dylann Roof in South Carolina at Mother Emanuel church. Vigilantes who hunted down and murdered Ahmaud Arbery. George Floyd dying beneath the knee of a policeman who, despite Mr. Floyd's constant demand to be let up, or his begging, pleading with the policeman that “I can't breathe,” we see with our very eyes that he dies.

Slow terror is the stuff that you don't necessarily pay attention to. I mentioned kids of color being kicked out of schools. Think about it: If you're seven or eight or nine or 10 years old and you've been kicked out of school for stuff that white kids are not kicked out for—they’re reprimanded, perhaps, but not to the degree that young kids of color or indigenous kids are—that sets you up for detention. Detention feeds you into jails. Jails become warehouses for prisons. The school-to-prison pipeline is being erected before our very eyes. Slow terror.

Slow terror [is] having your school systems poison you with inefficient and insufficient education, of denied opportunity, of chasms of wealth, of systems of racial intolerance and difference that divide communities and cultures. Those rarely visible manifestations of intense difference that get absorbed in your system every day, and you don't even pay attention to.

So that's the difference to me between fast terror, the visible explosive kind that everybody can point to, and the slow terror, the more subtle forms of hurt, trauma, and difference that really deprive you of equal standing in American culture.

There's a line you wrote about slow terror and fast terror that I highlighted—and I would have highlighted in six different colors if I could have—and it is that “Fast terror scares Black people. Slow terror scars them.” It's completely harrowing line.

There's a kind of psychic trauma of the scarring that goes on every day. Being told you're inferior. Having to deal with the “microaggressions,” the paper cuts to your ego that just suddenly bleed away your confidence, or being told that your hair styles “are really not what we think are appropriate in this setting,” or constantly being denied opportunities for jobs and upward mobility and the like. Just chipping away at your ego, scarring your soul.

Before we sign off, is there anything you want to talk about that I didn't ask you about?

Thank you so much for reading the book and actually engaging in it. Yes, the thing I wanted to say in ending is that when I when I wrote this book in the aftermath of George Floyd, I knew that reckoning would be upon us, but I knew a lot of people would soon say, “Hey, the reckoning is gone.” Six months ago, white people were enraged and identifying with Black people. Now, not so much. But I think the relations between races are like romances, and it was many white people falling in love for the first time with Black people. Many people, [after watching] the George Floyd video, said, “Oh, for the first time I get it, I understand it.”

When you're in love for the first time, you’re giggly and romantic and you bring flowers and so on. That's what was going on in the streets: “We love you, Black people. We’re in love with you. Black lives matter! We will change our institutions. We will put this tagline and this black square on social media,” and so on and so forth. Romance ignited passion.

Six months later, the toilet seat is up. The toothpaste is being squeezed [from the wrong end].

But this is when it settles down to normal life, where real love manifests itself. Real love goes from passion to practice, from ideal to reality. T. S. Eliot said, “Between the ideal and the reality / … Falls the shadow.” We are trying to light, through the illuminated practice of our commitment and loyalty, the edges of love.

And so now I think it's not that white folk are disinterested. I'm sure a lot of people are, and people are distracted and the next thing has come along…all that's true. But there is a sizeable number of folks who are trying to figure out, “How do I make this reality? What do you do on a daily basis?” This is where it is. This is where we are.

So you figure out, “Let's go to schools and ask questions about why police are in certain schools and not in others.” Everyday stuff, normal stuff, not big stuff on the headlines. Who gets the resources, and why? Why is it that Black and brown people tend to die from the lack of resources and COVID-19 than others? You begin to parse out and look at and interpret the normal everyday stuff.

So instead of seeing it negatively, I see it as their inevitable swings of the pendulum. To mix metaphors, there's a dying-down in the fading of a certain intense and visceral passion. But there's the giving way to something more permanent. And if we can find out how to treat each other with respect, decency, and graciousness, and also remove barriers that prohibit the flourishing of others so that they don't enjoy the kind of normal that we enjoy.

A cop stops a white guy, and he has a gun next to him on the seat, as happened a couple of days ago [during a December 2 traffic stop in Ohio], and the [cops] argue with him, they pull their guns. The white guy insists, “I'm not getting out this car,” and pulls off without being shot.

That's what we want: The ability to make a mistake, to not do things ideally, and not to pay the price of our life for having done so.

And one of the reasons I wrote the book is to suggest that in the midst of the pendulum swing, there's a lot more work to be done.

Dr. Dyson speaks with us about the racial reckoning in the United States and what to do next. 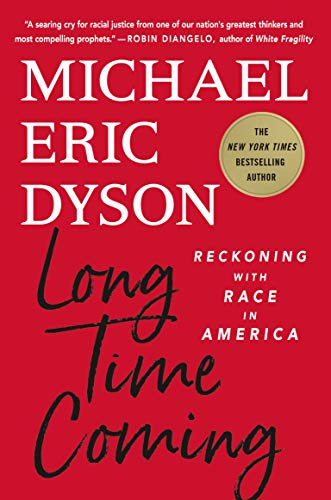