Sally Mann’s memoir, Hold Still, debuted this week and is on our Best Books of the Month list for May. 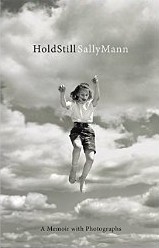 Honestly, I picked this book up knowing I would like it - I have admired and respected Mann’s photography for years, but I fell in love with it because it showed me who Sally Mann truly is.

Abounding in history and poetic prose, Mann stays true to form delivering a rich composition laced with innate intelligence and surprise. With Hold Still, she has put down the camera and returned to her first love of writing to craft a story that goes beyond the expected and crosses the lines of genre. Hold Still plays the part of a traditional memoir, providing a behind-the-scenes look into Mann’s life as a photographer – her discovery of photography, approach to taking pictures, connection with her subjects, and her candid insight into the controversy following the publication of Immediate Family. However, through Mann’s telling, Hold Still also flirts with the role of historical and social commentary – outlining her deep Virginian roots, connection to family, (delightful) friendship with painter Cy Twombly, and a love of the family land, which becomes a character unto itself – all written into a storyline that could rival any novel.

I am not sure whether it was my surname (we are not related, sigh) or my love for photography that landed me the chance to ask Sally Mann a few questions about Hold Still, but either way, I am adding it to the list of very fortunate events:

Penny Mann: I want to start by saying how wonderful of a read Hold Still was - the writing alone was captivating, and the stories told in such an artful and comfortable way. There is clearly a literary connection throughout your history and childhood. Do you think, had you not found photography at Putney, that you would have pursued writing or do you feel like photography would have found you no matter what?

Sally Mann: I’m so glad you enjoyed it. Thank you!

I don’t think I’d be fully whole if I didn’t pursue both. Even when I was concentrating on photography, I was still writing, though mostly letters. And of course I was reading, always, and keeping my brain attuned to the way language works. Then, when the opportunity came to do the writing for the Massey Lectures [at Harvard University], I was at first terrified, then challenged and excited. It felt a little like coming full circle, which of course it was.

PM: I loved reading the stories of your father: placing the sculpture for the garden tour to find, replying to your mother regarding the patient she had seen buying whiskey, etc. and then later stories of Cy Twombly - there seemed to be some parallel between their (your father and Cy's) approach to life and, in turn, impression on you. Do you feel there were similarities in them as men, as well as in their connection/impression on you?

Sally Mann: They both had a certain courtliness and impishness about them, which when you think about it is an unusual pairing. Each had been raised to be a gentleman and to be courteous and respectful, very much the product of that era and of the South. But they also both enjoyed tweaking cultural expectations and took pleasure in the ribald and the risqué. And, of course, each possessed the calcified certainty that art mattered, maybe even above all else. This was strenuously conveyed to me by both of them.

PM: Knowing the experience you had with letting the world ‘in’ with the publication of the family pictures, was there any hesitation in writing this book? How is this different? Same?

Sally Mann: I once said to a photographer named Judith Joy Ross that I wanted my then nascent family work to be “open.” She replied dourly: “Sometimes, Sally, when people see openness, they see a way in.” I never forgot that and, of course, it proved to be true. I think there are some differences here, though: the family pictures were subject to so many interpretations, and every person who looked at them had not just an opinion but also a connection to the work that was unique to them and felt very personal. Hold Still is less interpretively labile—it is more of a statement and less of a question. Besides, I am such a recluse that I don’t think people will see that “way in” with this book, other than, I hope, one to their own psyche.

PM: You speak to the scrutiny and ridicule you received as a result of the family pictures - people judging the artist rather than the art - why do you think that is? Do you think this is something that has become more so over the last decade? And do you think that as a result there are many artists choosing not to bring their art to public eyes?

Sally Mann: I don’t see many artists who are not trying to bring their work to the public---to the contrary I see artists nearly desperate to get attention for their art and, failing that, often for themselves. They should be careful, as I said in the book, fame can be a double-edged sword and can fall into the “careful what you wish for” category.

PM: Reading about and watching the process of you capturing "The Last Time Emmett Modeled Nude" was an incredible look inside your process, the dedication to finding the shot through days and days of attempts - and then the contrary of "The Perfect Tomato," which came in a moment.  Is one more gratifying than the other? Or how are both experiences equal in the gratification?

Sally Mann: TLTEMN, as we acronomize that picture, made me feel a bit like a demented terrier in unswerving pursuit of her quarry. I knew there was a good picture there, but I just had to pursue it with that dogged determination that is both a bedevilment and a blessing within my personality. "The Perfect Tomato," and a few others like it that came effortlessly and miraculously, those are my rewards, my pat on the head from the Muse.

PM: Along the same subject - did you find writing this book to be more of an 'Emmett in the river' experience, or a 'perfect tomato' experience?

Sally Mann: The writing was a bit of both: plodding, day after day dedication to the computer screen enlivened by a few affirming moments of inspiration and miracle... Just enough of the latter to keep me at the pursuit.

PM: What do you think makes a good picture?

Sally Mann: The peculiar, which a good photograph needs like a Bloody Mary needs a dash of Tabasco, as someone once said, and more than a dash of the felicitous aesthetic je ne sais quoi that makes an image resonate universally; just plain old transcendent beauty, grace, and proportion.

PM: What is your favorite thing about being a mother? A wife? A photographer?

Sally Mann: A good glass of well-deserved bourbon at the end of the day. 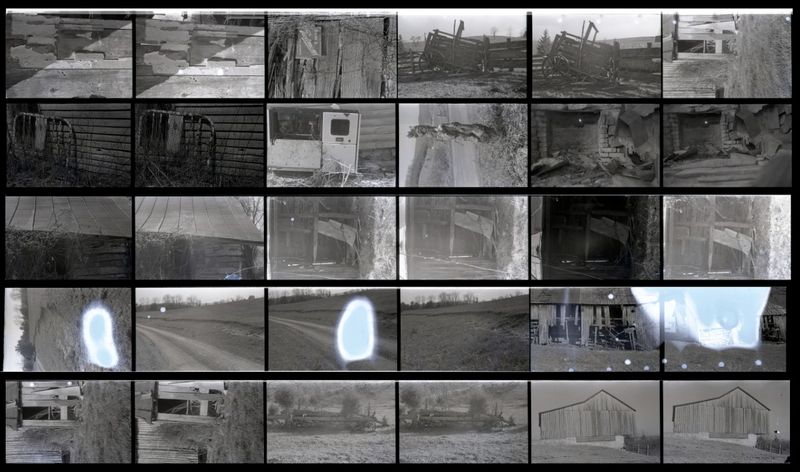 The contact sheet of surviving exposures from Mann's first roll, developed in 1969 while she was in school at Putney. From the letter she wrote home and her own account of those moments, it was clear she had found a new medium to speak through. 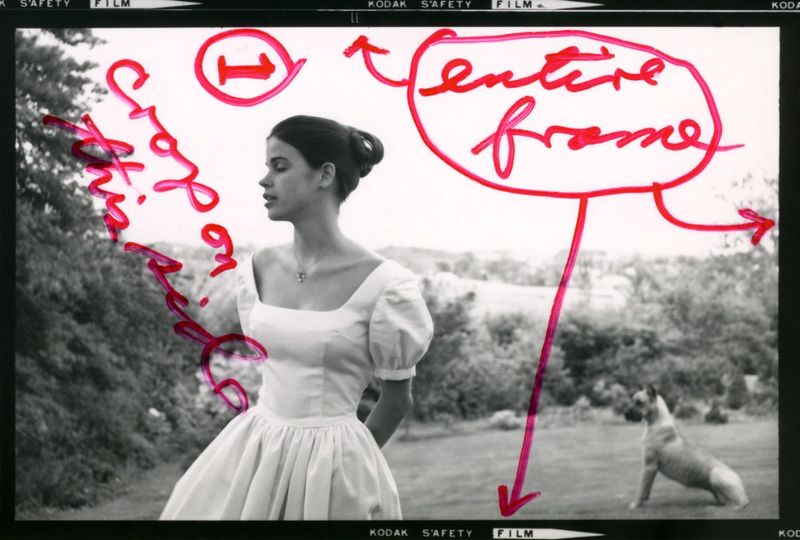 Always looking for the perfect composition, here are Mann's editing notes on her own wedding portrait. 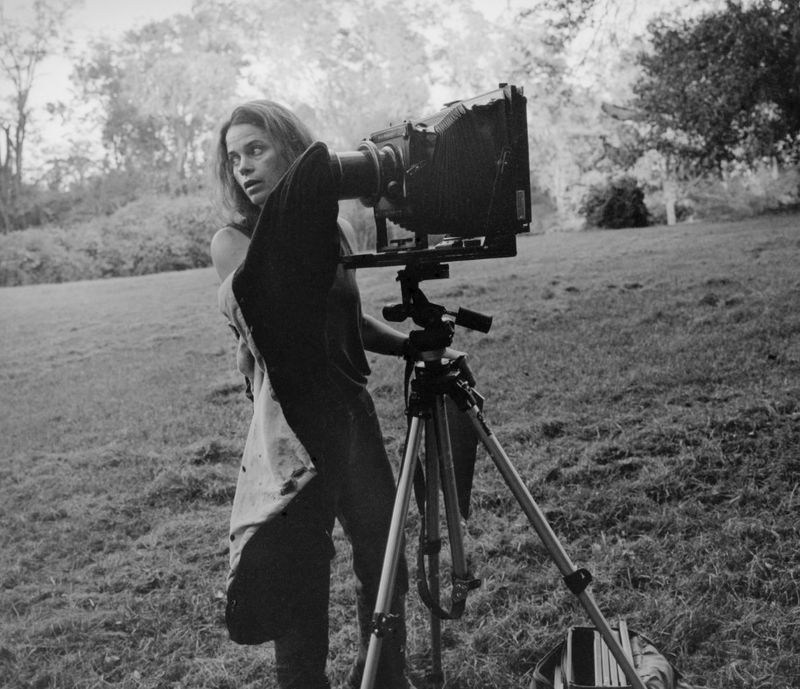 Finding her own technique shooting with ortho film, Mann controls the light with merely her hand and a dark cloth.