The Long and Short of It: An Interview with Etgar Keret 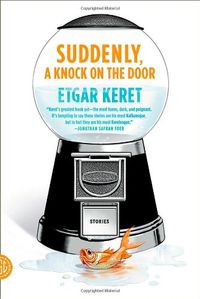 I've waxed enthusiastic on here before about Israeli writer and filmmaker Etgar Keret's sharply funny new story collection, Suddenly, a Knock on the Door. Between tour stops in California and Chicago, the very busy Keret kindly paid a visit to our Seattle offices to chat about storytelling, moviemaking, cake baking, serial killers, and trusting your instincts.

He also humored our request to read a piece aloud from the collection—look for the video at the end of this interview, and prepare to be charmed by his accent (warning for delicate ears: a couple of four-letter words are used).

Etgar Keret: Yeah, in my panel. It was very much like an AA meeting. “My name is this and this, and I write short stories. I don’t care! They tell me to write a novel, but I like writing short stories!” Then we all hug.

You’re one of those rare writers, like Raymond Carver and Grace Paley, who has stuck with stories throughout your career.

[Laughing] I didn’t mean stuck in a bad way, I meant that you’ve stayed with stories.

If your boyfriend would have said, “I’m stuck with you, but not in a bad way. In a nice kind of way…”

I love short stories, I’m a champion of them around here. Why does the short form work so well for you? What are you drawn to in that length?

When I sit down and I write something, I don’t say, “I want to write a short story” or “I want to write a three-page story”—I want to write something that is on my mind. Many times when I begin writing a story, I say to myself, “This is going to be my first novel.” And I think about the protagonist meeting his grandchildren in the park. And while I do that, a truck comes and runs him over after two pages. So it’s not intentional. For me, it’s very strange when people say, “Why don’t you write longer stuff?” The bottom line: You have something that you want to say or you want to write. And when it ends, it ends.

You’re also a filmmaker. Do you have a different creative approach to making films than you do to writing fiction? Is it a different state of mind?

I beg more when I make films. [Laughs.] Filmmaking is a collaborative project...when you write a screenplay, you should be able to know exactly what you’re doing, to be able to defend it, to be able to explain it to people. Because if a story is a cake, then a screenplay is just a recipe for a cake. If I make a cake and I don’t know exactly what ingredients I put in, but it comes out tasty, it’s OK. But if I have to write it on a page and somebody else has to make this cake, I have to be much more conscious.

So there is something about screenplay writing—it’s more conscious effort, more rational effort. I feel like I need another scene here, I need to establish that. But when I write [fiction], I really just sit down and write. I don’t know exactly what I’m doing, and it’s completely an act of letting go and losing control.

Short stories are a famously hard sell for publishers and, I’d say, for the average reader. Do you think that’s changing at all as a result of social media? Do you think people appreciate short pieces more because our attention spans are getting shorter?

You know, it’s funny because I’m saying it here at Amazon, but there’s something about the publishing world that finds it very difficult to deal with changes. And many times you feel there is something very petrified there. It’s like being in the ditches, you know, and kind of shaking in fear.

The idea is that traditionally, short stories were not a big seller because for printed media, you have to sell something that is 400 pages long, and it’s more natural to have a novel. But if you think about, let’s say, the difference between records that you used to have and a song that you can download on iTunes, then today you can read stories individually. If I’m on my way to work on the subway, and I have eight stops and I want to read something, it makes much more sense to read a story.

So I think the world is changing, and these changes can actually improve the situation of the short story. But I don’t think that publishers have internalized it. You know, people just love stories. When you meet somebody, you tell him a story, you don’t tell him a novel.

Right. It’s a bedtime story, not a bedtime novel.

There is something very distinctive about this. When you meet your parents and you say to them, “You know what happened? I met this guy, and he told me this.” All the time, we’re telling stories. And the thing that put short stories in the shadow was very physical and pragmatic, it had to do with the way texts were being packaged. And I truly believe that this could change.

What is the literary landscape like in Israel right now? Are readers different there than here?

Well, for good or for bad, it’s a small country. And it’s very warm people, so everybody knows you, or dated your sister, or beat up your brother. I once wrote this sketch for a comedy show about the fact that in Israel, you can’t be a serial killer because when you come randomly into a building and you want to kill somebody—

You know the doorman.

You know the doorman, you’ve been to high school with the guy. So there is something about this kind of intimacy in Israel that makes readers very different. When I go overseas, there is something kind of mysterious: Who is this guy? And I think that the stories are being read differently because they tell the story of a different place, maybe a strange place. You don’t have this feeling of familiarity that I bet many Israeli readers have.

What are you reading these days? Do you have different taste on the road than you do when you’re at home?

I must say that on book tours like this, if I had time to read I would shower.

But I've recently finished reading Nathan Englander’s collection of short stories—of course, I’m biased because he’s a friend and he translated some of the stories in my collection—but I think it’s an amazing collection.

In addition to everything else, you also teach at the university level. What’s the first thing you say to new writers, or the most important thing? Where should they start?

What I say is that when you choose a style, then the best thing would be not to imitate something that is successful, something that you like. Because the thing that you can ultimately be best at is being yourself. So if you write stories and they come from the way that you perceive the world, and you write them in the way that is most instinctive to you, then you’re kind of the world champion in being you. Nobody could be you more than you can. So basically the moment that you believe that what you are is interesting, you are halfway there.