Rebecca Roanhorse won't stop writing (and thank goodness for that) 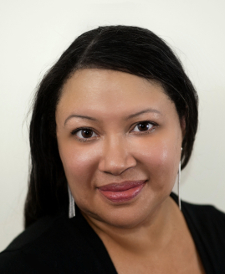 Last month at New York Comic Con, I got the chance to sit down with one of my favorite writers, Rebecca Roanhorse. And I’m not her only fan—not by a long shot. Since Trail of Lightning hit readers’ hands last year, the action-filled fantasy novel proved to be both a reader favorite (an average of 4.6 stars on 450 customer ratings on Amazon as of this writing) and an awards-nomination magnet.

But Roanhorse hasn’t just kicked back and soaked in the accolades. Starting in April 2019, she has three books releasing in less than 12 months, all set in different worlds: Storm of Locusts, Star Wars: Resistance Reborn, and Race to the Sun (January 2020).

While Star Wars has its own pre-built galaxy far, far away, Roanhorse designed her own universe for Trail of Lightning and Storm of Locusts, which are both set in the Sixth World. According to Navajo traditional stories, there exist cycles of time. “We are currently in the fifth world,” explains Roanhorse. “The next world will be the sixth.”

A number of cataclysmic events trigger the advent of the sixth world. A climate apocalypse, energy wars, and Pacific Northwest shearing off into the ocean send humanity into a tail spin. Recognizing that the world is descending into madness, the Navajo—or Diné—build a wall around their lands and request the help of the gods to make it strong. The Diné still have their problems—criminals, gas shortages, no modern technology, and long-dormant gods who have decided to take a greater interest in the world. Still, life inside the wall is better than outside, as series hero and monster hunter Maggie Hoskie discovers in the second book, Storm of Locusts, when a good friend is kidnapped and removed from the lands of the Diné.

Like Maggie, some of the Diné have magic power. But Roanhorse didn’t want to follow the usual script regarding magic and Native Americans. 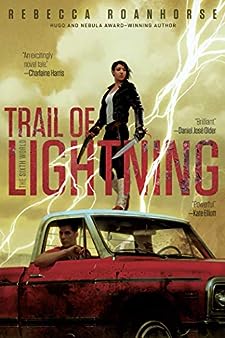 “It is indigenous science fiction fantasy,” says Roanhorse about the Sixth World novels. “A lot of indigenous characters or Native characters, when they’re put in science fiction, have these spiritually based powers or shamanic powers, and I didn’t want to do that.” Their powers, instead, are manifested by trauma, and the elements of those powers are derived from their clans. “In Navajo, you have four clans, and I wanted the [characters’] powers to be rooted distinctly in what their clans would be.” One of Maggie’s clans is the Walks Around clan, allowing her to be extra quick and agile.

Speed and agility comes in handy when you’re a monster hunter. Much as the gods have become more active, so too have the deadly, dark creatures that were repressed before the world changed.

Among those gods is Coyote, a troublemaker both onstage and backstage during many of Maggie’s adventures. “Coyote is probably the most fun to write. You can be outrageous,” says Roanhorse. Still, she admits, “I love all my characters.”

The wealth of characters in Star Wars: Resistance Reborn is something Star Wars fans will deeply appreciate. Set between The Last Jedi and The Rise of Skywalker feature films, Resistance Reborn follows Leia, Finn, Poe Dameron, and Rey as they try to rebuild the rebellion from the ashes of defeat. They’ll need all the help they can get, even if it means bringing back people who thought they were out of the Rebel business. To find the best heroes she could give the Resistance, Roanhorse mined comic books, videogames, previous books, and the older films. “I brought in characters from Black Squadron in the Poe [Dameron] comic books, and I brought in characters from Battlefront II’s Inferno Squad, and there’s going to be other old favorites and people I think you’re going to be excited and surprised about. [Even] some of your old favorites from the Original Trilogy. They’re all going to come back to join the Resistance.” 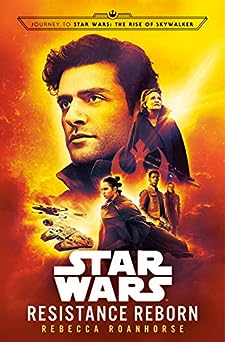 When asked if she’s always been a Star Wars fan, Roanhorse described how she would play with her brother’s Star Wars action figures that he kept in a container shaped like a Darth Vader helmet. “We’d build space stations and these far-off planets for them to explore. And when it would rain, I would take them out to the rain gutters and fight earthworms. I had grand adventures…. I’m old enough to have seen the [movies] when they came out, but honestly, it was me creating my own adventures and my own stories with those characters that really got me into Star Wars.”

Readers who are either young at heart or who want to encourage their kids to read fantasy will have to wait only until January for Roanhorse’s new middle-grade novel aimed at kids ages 9 to 12 called Race to the Sun. “It’s sort of like Trail of Lightning for kids. But no swearing!” She laughs. “It is also based in Navajo traditional stories, and it follows a seventh-grade girl from Albuquerque.” Nizhoni Begay has anger issues from her mother leaving the family, and she’s starting at a new school. Everything she tries to do to fit in leads to “humiliation after humiliation.” But when Nizhoni, her little brother, and her best friend have to go on an adventure to save her father, she learns “what it is to really be a hero, and that maybe being cool or being popular is not the most important thing.”

After publishing three books in 12 months, some would take a long vacation. But Roanhorse already has her writing plate full of new projects. A third book in the Sixth World series is planned, and she’s starting a new fantasy series with a book currently titled Between Earth and Sky. “My indigenous epic fantasy” is how Roanhorse describes the new series. It will focus on a number of indigenous cultures of the Americas like the ancestral Puebloans of Chaco Canyon, the Cahokia, and the maritime Maya from the now-Mexican coast. “It’s fantasy, so these are just allegorical cultures, but I’m excited.”

Watch out, 2020. Rebecca Roanhorse is writing, and she’s not stopping any time soon.