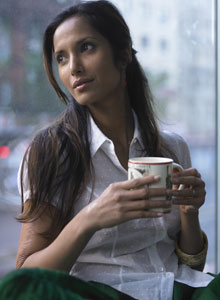 In addition to her role as host of Bravo's Top Chef, Padma Lakshmi's résumé also includes work modeling, acting, and as the award-winning cookbook author of Easy Exotic: Low-Fat Recipes from Around the World. Her new book, Tangy, Tart, Hot & Sweet, is a personal scrapbook of recipes that serves as a culinary passport to a world of international flavors. Padma recently visited the Amazon offices during the Seattle stop of her book tour for a late afternoon coffee break with a few Amazonians at the Starbucks in our building. Graced with undeniable poise, and resplendent in a ready-for-the-runway white dress with matching go-go boots, Lakshmi turned heads as soon as she stepped off the elevator. Afterward she joined me in our podcast studio to talk about her book, Top Chef, the secret to her fried chicken recipe, and much more.

Some highlights from our talk are below. Read or listen to the  entire interview on this week's episode of Amazon Wire.

Amazon.com: How do you envision a home cook approaching your book? What's the best way for them to dive in to it?

Lakshmi: That's a great question, Brad. I think the best way to do it, especially with the more complicated recipes--there are some really easy recipes. The easiest one being Chili Honey Butter--and it's exactly that. Probably the most--I would say, not difficult--but a bit intimidating recipe in the book is the Chicken Bisteeya--the curried Moroccan pie. And that dish is traditionally made with pigeon, but I thought I better do it with ground chicken--you can do it with ground lamb or ground turkey or whatever.

What I recommend for all these recipes is to do them when you have time on a Saturday. And think of it like a hobby, like you would with doing a crossword puzzle, or anything else. I would do your mise en place before you start. Mise en place is a French term meaning to chop all your vegetables and put them into place before you begin. That way you're not scrambling--you're doing yourself a favor. I do a mise en place for the week in my own home. I know I'm going to use onion, I know I'm going to use garlic, I know I'm going to need some chilies, I'm probably going to use some bell peppers... so I chop those things up, I put them in a plastic container, and I stick them in my fridge. Most of cooking is the labor of chopping. Give yourself a break. Pretend you're on a cooking show and have all your ingredients lined up for you. I learned this, actually, going on The Martha Stewart Show. Arrange the ingredients on your counter in the order that they appear in the recipe. So even when you're cooking and you're stirring and you don't want to burn yourself, the next thing that you're reaching for is the next full plate or bowl of ingredients. And don't use a different dish for every single ingredient. If you've got three ingredients that go in at the same time, put them all in the same plate. That way you have just one plate to dump in.

Amazon.com: Makes perfect sense. It sounds like a lot of work but in the long run it more than makes up for it.

Lakshmi: Yeah, once you do a recipe a couple of times like that, then you're not under the pressure of Oh my god, it's not going to come out well and then if it doesn't come out well what am I going to serve for dinner? Most of these recipes, except for maybe the fried recipes--but even the fried recipes--they are great as leftovers. There's not anything in my book that isn't great as leftovers. Probably the flautas, because they're fried and they're better eaten hot. Even the fried chicken is great cold.

Amazon.com: Speaking of fried chicken, you were raised a vegetarian, but was there a turning point when you became a full-time carnivore or did it sort of happen naturally?

Lakshmi: It happened very gradually. It started with the most heinous of things--pepperoni on pizza, bologna on sandwiches, hot dogs. Probably the first thing I ate was a hot dog on a New York street corner. Not exactly the Cordon Bleu method. Once I was a teenager and growing up in this country, I sort of got phased in that way. Kids can be cruel. I remember when I first came here and I was eating from Tupperware with curry and rice and vegetables. You know, it's very pungent. In the 80s India wasn't as groovy as it is now. India's had two groovy moments. Once when the Beatles went to India and now when Madonna has embraced yoga. Kids were mean and they'd be like, ewww, what is that? I wanted to fit in. And that's how it started really.

Amazon.com: And I guess your mouthwatering three-page tribute to bacon in the book officially seals the deal?

Amazon.com: And as mentioned, you also throw your hat into the ring with a fried chicken recipe. As you say in your headnote, what's a girl from south India know about Southern fried chicken? Where did that recipe come from?

Lakshmi:   Years of tasting! I'm a sucker for fried chicken--I really love it. I'm a fan of all of Edna Lewis' recipes. I recently met the Lee Bros. who happen to be huge Top Chef fans--and gosh they are cute in person! I really love fried chicken. In a way that somebody else converts to Judaism or becomes a Hare Krishna, I belong to the church of fried chicken.

Amazon.com: You're a would-be Southerner...

Amazon.com: Your secret ingredient is Rice Krispies and a double brine...

Lakshmi: Yeah... there are two schools of fried chicken. One is brining in salted water and the other is soaking in either buttermilk or milk. I just combine the two. I basically use like a Maldon or coarse-grain sea salt and I do it in whole milk and I just cut the chicken up. I stir the salt until it actually dissolves into the milk. That's very important. I like sea salt rather than iodized salt because I think the mineral content adds a real briny, ocean flavor to it. I encourage people to layer flavors. I remember when we were editing this book on another recipe--I think a crumble recipe--one of the editors who was helping me with the measurements said, You have three kinds of sugars and Frosted Flakes and no serious chef will take you seriously. And I said You obviously don't have children in your house because if you have children in your house you have Frosted Flakes. And I'm using three types of sugars because that's what makes it taste the best. If you don't have three types of sugar then please, use just one.

Amazon.com: And like you said, even better the next day.

Amazon.com: How has working on Top Chef altered your point of view on food?

Lakshmi:   It's made me much more omnivorous. I went to Top Chef very much a carnivore, but I had certainly never eaten frog legs and elk and bison and kangaroo and rattlesnake--often in the same meal together. It has broken every food inhibition that I could hope to even think of. I will eat anything, at least once. For better or worse.

Amazon.com: And how does the featured city on the show affect the vibe of each season?

Lakshmi: It affects it considerably. It's kind of a pain in the neck for us to pick up and move to a different city every time--a lot of us on the set grumble about it. But I do think for the show it's very useful. Each city has its own culinary landscape. For instance, Miami, which has already aired, has this wonderful blend of Caribbean culture and Latin American culture and Southern American culture (talking about fried chicken). All those combine to make for a very very interesting array of ingredients, restaurants, and the chefs that come there. It also has great seafood, not to mention the glorious citrus that's there. And all those things inform what you do--and they should. If any chef ever tells you they're not inspired equally by the truck-stop barbecue as they are by the four-star Michelin restaurant they are lying.

Amazon.com: I know you're sworn to secrecy, but any hint of a preview of what to expect in Chicago?

Lakshmi:   Yes, I am sworn to secrecy, but I can tell you there are a lot of strong women this season.

Amazon.com: And finally, Padma, of the four taste sensations in the title of your book, is there one you're drawn to over the others?